“MINIONS: THE RISE OF GRU” 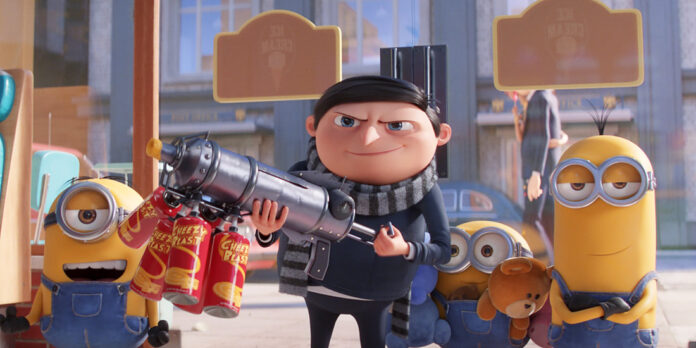 THE STORY – In the 1970s, young Gru tries to join a group of supervillains called the Vicious 6 after they oust their leader — the legendary fighter Wild Knuckles. When the interview turns disastrous, Gru and his Minions go on the run with the Vicious 6 hot on their tails. Luckily, he finds an unlikely source for guidance — Wild Knuckles himself — and soon discovers that even bad guys need a little help from their friends.
​
THE CAST – Steve Carell, Pierre Coffin, Taraji P. Henson, Michelle Yeoh, RZA, Jean-Claude Van Damme, Lucy Lawless, Dolph Lundgren, Danny Trejo, Russell Brand, Julie Andrews & Alan Arkin
​
THE TEAM – Kyle Balda (Director), Brian Lynch & Matthew Fogel (Writers)​
​
THE RUNNING TIME – 88 Minutes

​​​Universal and Illumination could put the Minions in any era or time period, and it would likely be a guaranteed smash-hit at the box office. What will they do next with the tiny yellow characters we’ve all grown to love? Put them in the Renaissance flying Da Vinci’s helicopter? The Minions could be palling around with iconic American figures, or maybe we see them next in the 1920s, causing the Great Depression. Who knows where the studios will take them next, but drop these little weirdos anywhere and give them rapid-fire jokes, and audiences will surely eat it up. In “Minions: The Rise Of Gru,” the filmmakers have taken full advantage of the 1970s setting with a killer soundtrack and groovy villains to deliver the best “Minions/Despicable Me” film yet. Pairing the retro atmosphere with the same Minions hilarity we’ve come to expect makes this the funniest animated film of the summer.

Picking up where the first “Minions” left off, the cuddly little Twinkies have officially become the henchmen for 11-year-old Gru (Steve Carell), though he’s not exactly a supervillain yet. Biding his time, Gru feels ready to become the next great baddie, but no one will take him seriously. “I’m pretty despicable,” he claims. Leaning into the 1970s vibes, “Minions” and “Despicable Me 3” director Kyle Balda gives Gru a hilarious James Bond-esque opening title sequence to start things off with a nostalgic bang. Gru idolizes the infamous supervillain crew, the Vicious 6, who have just stolen a mysterious Chinese stone that could help them take over the world. After the Vicious 6 laugh Gru out of the room after he interviews to join the team, he dedicates himself to showing them how evil he can truly be.

Truth be told, the story for “Minions: The Rise Of Gru” is merely something that happens in the background of the Minions’ shenanigans. There is no dramatic weight or tension for the plot as the stone that the Vicious 6 are after is merely a McGuffin, giving Gru and the Minions reason to be on the move. It’s unclear what the power of the stone is, even up to the very end, after the supervillains have demonstrated what it can do. Yet, despite this inconsequential plot, the movie soars on the strength of its comedy and lively voice performances.

The sheer volume of jokes in this film is enormous, and most of them land pretty well. While Pixar films are often funny, they’re much more concerned with telling a compelling and emotional story. The “Minions” films and especially now with “Minions: The Rise Of Gru” piles gag on top of gag to keep the audience laughing, entranced by the earnest undersized weirdos. The decision to place the story in the backseat while the comedy drives the film forward is actually a pretty wise move as it allows “Minions: The Rise Of Gru” to shine in a way few other animated films can. Even when the screenplay reuses jokes (the little yellow butts of the Minions are shown three times), the commitment to delivering humor for both kids and adults is exceptional. Such dedication is why the franchise has kept such a hold on kids, and this new entry is a perfect film for families as it’ll have you laughing for a good deal of the running time, so much so that you’ll forgive that the story isn’t that overall strong.

As much as the story may be forgettable, there are some highlights to be found. Michelle Yeoh makes a short appearance, which is always exciting, but she nearly steals the show as an acupuncturist who teaches the Minions kung fu. Alan Arkin and Steve Carell also give fantastic voice performances, though no one can top Pierre Coffin’s legendary performance as the Minions. Alongside the non-stop jokes, Illumination’s animation style has taken some time to grow so it could catch up with some of the more advanced studio’s efforts. Still, its sincere heart is what inevitably wins out. It’s sometimes overly cutesy, but the quality of the animation is so top-notch that they’re able to craft some vibrant images which are pleasing to the eye and have (and will continue to) sell constant merchandise for the studio to keep on making more films in the future.

The “Despicable Me” franchise is a fascinating thing. Now five films in, and they’ve spawned one of the most memorable character(s) of the century with their titular Minions. Yet as unforgettable as the cute yellow guys may be, their films’ plots are precisely the opposite. The first “Minions” film proved to be unmemorable, but “Minions: The Rise Of Gru” perfects the animation and humor this franchise has been trying to get right for over a decade. And that’s the real magic of these hypnotic little beings: no matter how forgettable the story, their ridiculous comedy can still draw you in. “Minions: The Rise Of Gru” strikes that balance remarkably well, making it the best entry in the franchise yet.