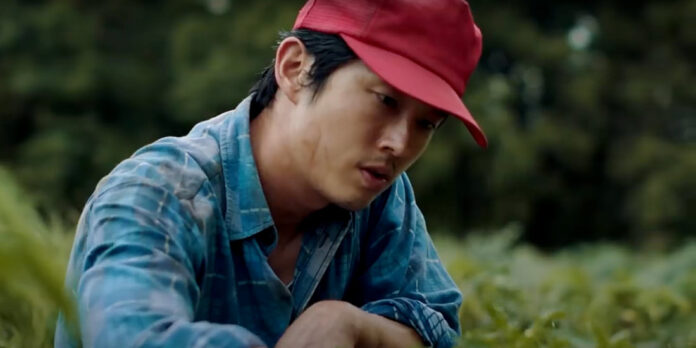 THE STORY – A Korean family moves to Arkansas to start a farm in the 1980s.
​
THE CAST – Steven Yeun, Han Ye-ri, Alan Kim, Noel Kate Cho, Youn Yuh-jung & Will Patton

​Emile Mosseri’s (composer for “The Last Black Man In San Francisco“) soothing and angelic score perfectly sets the stage for the simple and beautiful story we are about to see play out. Korean immigrants Jacob and Monica Yi (Steven Yeun and Han Ye-ri respectively) are driving to their new home in 1980s Arkansas from California, where they’ve both worked in chicken factories sorting the males from the females. A new life and the promise of the American Dream lies before them as Jacob is committed to starting a farm on the land he’s purchased growing Korean food, which will hopefully bring new opportunities for him and his family. Problems arise when they discover that their new home is raised off the ground, cramped and not at all what they expected. Tensions between Jacob and Monica continue to grow as Monica’s mother (Youn Yuh-Jung) comes from Korea to live with them and their two children Anne (Noel Kate Cho) and David (Alan Kim), whose heart is suffering from a medical condition that could get worse at any minute.

With the stage set, director Lee Isaac Chung allows his story to play out naturally with authenticity as we follow the Yi family through their struggles. We become emotionally invested in them early on and that attachment never ends, culminating in an effectual ending that illustrates the American immigrant experience magnificently through its central theme of perseverance. Despite financial woes, the Yi family perseveres. Despite their son’s medical condition, they persevere. Despite the strain all of these hardships are putting on Jacob and Monica’s marriage, they persevere. Seeing Jacob persist in hopes of building a better life for him and his family is awe-inspiring to see as he uses his mind and puts in hard work to achieve his goals on the farm. “Even if I fail, I have to finish what I started,” he says and you believe that through Steven Yeun’s strong but vulnerable performance. Hot off of his acclaimed work in “Burning,” he continues to show us what a gifted actor he is as the subtle, yet stern family patriarch.

And although Yeun is terrific, the true stand out is Alan Kim as young David, who we see a majority of the film through. He is utterly fantastic in every single scene he is in, delivering a level of cuteness that is irresistible. His interactions with Youn Yuh-Jung especially are a definite highlight as their relationship starts off antagonistic (Grandma curses, does not bake cookies, and wears men’s underwear which upsets David because he wants her to be a traditional grandma) but then blossoms into something warm and lovely by the end. In all honesty though, the entire ensemble deserves a shoutout for garnering our empathy and delivering profound work that never calls attention to itself but always fits in with the grounded tone Lee Isaac Chung is going for.

Large portions of the film are spoken in Korean and center around themes of family and tradition while communicating a universal story that many will relate to. Coming from A24, inevitable comparisons will be made with another one of their films “The Farewell,” but “Minari” deserves to stand on its own as a classic American story. Seeing the Yi family get welcomed by churchgoers (including an oddball evangelical Christian played by Will Patton) in the south, is a far cry from the discrimination and racism we see happening to immigrants in our world today. Lee Isaac Chung never gives in to cliches or melodrama with his storytelling. Every beat, progression, and character moment feels richly nuanced and well thought out to deliver a story that feels genuine and inspiring. He gives us time to get to know these characters, carefully paces out his movie and has it culminate in a memorable scene of fiery tension that guts our emotions. His work is deceptively simple but quite powerful as the Yi family continues to rebuild and hope for a better future. As Grandma Yi says about minari seeds she’s planting with David at one point in the film, they are “wonderful, wonderful.” And that’s exactly what “Minari” is. It’s simply wonderful.