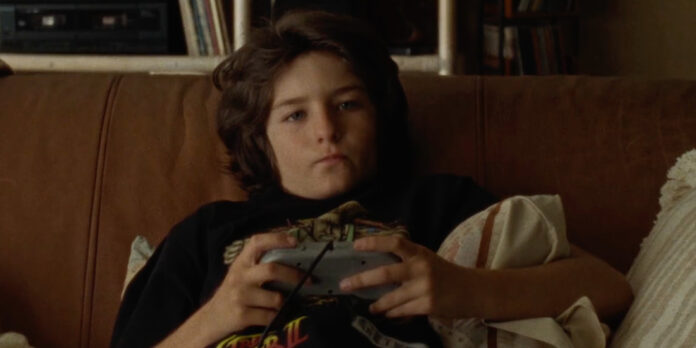 THE STORY – In 1990s Los Angeles, 13-year-old Stevie spends his summer navigating between a troubled home life and a group of new friends that he meets at a Motor Avenue skate shop.

​​​In his directorial debut, Jonah Hill has chosen to bring us back to a time, that may not be that long ago but feels vastly different than the world we know today in 2018 and that is the mid-90’s. In the appropriately titled “Mid90s,” Hill presents a “slice of life” story told from the perspective of a young pre-teen kid, who is desperate to be cool and accepted by a neighborhood group of skateboarders he looks up to and idolizes. Jonah Hill (who doesn’t appear in the movie at all), establishes that he has talent behind the camera, presenting enough creative directorial flourishes that enhance the aesthetic and mood of the film, helping to make “Mid90s” stand-out amongst 2018’s other distinctive directorial debuts. However, a troublesome screenplay with one too many uncomfortable moments for today’s audience members, no matter how “authentic” Hill wishes to present them, holds “Mid90s” back from being a full recommendation.

It’s the mid-90’s in Los Angeles. 13-year-old Stevie (Sunny Suljic) is a young kid who wants to learn how to skateboard so he can hang out with the other cool skaters in the area who spend their days working at the Motor Avenue skate shop, partying and of course, skateboarding. During one summer, he befriends the group and discovers new experiences such as drinking, smoking and more, while trying his best to keep everything from his mom (Katherine Waterston) and avoid his dominating, insecure and temper filled older brother (Lucas Hedges).

Let’s start off with what Hill gets right about “Mid90s” before we harp on him for what he gets so horribly wrong. The lead performance by Sunn Suljic is outstanding and if “The Killing Of A Sacred Deer” and “The House With A Clock In Its Walls” did not already signify to you that this 12-year-old kid is truly gifted, then “Mid90s” should do it. Standing in as our protagonist for this edgy drama is no small feat and Suljic handles it with maturity and a level of authenticity which is perfectly suited for what Hill is going for in this atmosphere of this film. He gets an equally compelling performance out of Lucas Hedges, that is unlike anything we’ve seen the young Academy Award-nominated actor give us before. As Stevie’s tough & insecure older brother, Ian doesn’t like that his younger brother may be surpassing him in cool-ness or social standing. The rest of the ensemble are all believable in their roles, although I wish Katherine Waterston could’ve received more material to work with as the mother of Stevie and Ian.

Shot on 16mm, with a 4:3 aspect ratio, Hill does everything he can to make “Mid90s” look like a worn-out VHS tape you just popped into that familiar VCR for the first time in ages and it lends itself well to making the film look aged and nostalgic. The score by Trent Reznor and Atticus Ross is anything but as their electronic tones and moody compositions are some of the best of the year, giving this film a vibrancy that undercuts all of its brisque 84-minute running time. Credit also needs to be paid to the editing by Nick Houy which appropriately splices in homemade skateboarding video footage and has a number of smash cuts which will leave an impact on you long after the film is over.

And now we come to the screenplay. It is here where Hill could show more improvement as this “hang-out” movie in the same vein as something created by the likes of Richard Linklater lacks the nuance or maturity to be taken seriously. The language used by the characters in this movie very non-PC with numerous f-bombs, racial slurs, cases of homophobia, misogyny and much more. I understand that Hill was striving for a level of authenticity from the era and he is writing what he knows from a personal place, but there comes a point where we need to empathize with these characters, understand who they are and unfortunately, outside of Stevie, the characters in “Mid90s” feel lost, misguided and not worth our time or sympathy. There is one scene, in particular, featuring an underage sexual encounter which was highly uncomfortable and done in poor taste that served no purpose to the film’s story or its characters and instead felt rather exploitative.

With its nods towards Street Fighter, Blockbuster, Kiss, Goodfellas and other pop culture references, “Mid90s” has the ability to transport you back to its time. Jonah Hill does a fine job of crafting the look, feel and performances from the film that it’s a shame the screenplay couldn’t have been a bit more mature in its themes and dialogue. As it stands, “Mid90s” is a solid directorial debut for actor Jonah Hill when he’s not trying to write a 2018 version of  “Kids.”