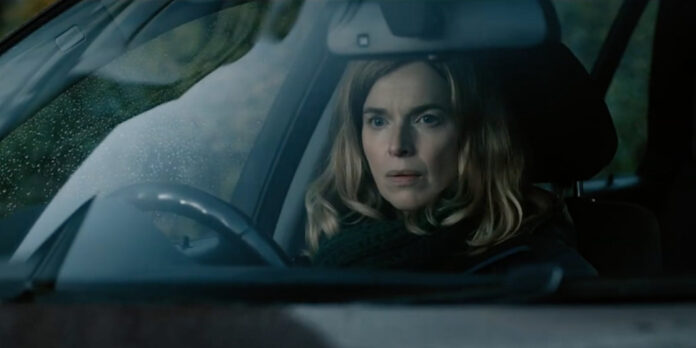 THE STORY – Marianne is a child therapist who struggles with her strangest case yet: a boy who claims he can affect the future.​
​
THE CAST – Thekla Reuten, Peter Mullan, Emun Elliott, Elijah Wolf, Bill Paterson & Sam Hazeldine

“Cliche” is usually a dirty word when it comes to describing movies. It’s usually assumed that audiences don’t want to experience tired tropes and overdone story beats, but look at any list of the highest-grossing films from the past decade and you’ll see that audiences actually yearn for familiarity. Storytelling that doesn’t surprise the audience with its methods is a great source of comfort for many people. So, calling a film “cliche” isn’t necessarily a bad thing, as long as said film does something interesting with its more well-worn parts. In that sense, Elbert van Strien’s new film “Marionette” is a success in the way it takes a plot built upon a foundation of cliches and takes it to unexpected places. Unfortunately, it takes too long to get to the parts of the story that are in any way surprising and spends a bit too much time with its more predictable elements.

Selected for the 2020 Cannes Film Festival,“Marionette” is centered around Marianne Winter (Thekla Reuten), a child therapist who escapes her tragic past by moving from upstate New York to a remote part of Scotland. She quickly finds herself overwhelmed by the case of a difficult boy named Manny (Elijah Wolf), who claims he can cause things to happen in the future simply by imagining and drawing them. Initially skeptical, Marianne encounters a few too many coincidences connected to Manny’s supposed ability and realizes she needs to uncover the truth behind his power before catastrophe strikes.

So yes, “Marionette” is reminiscent of “The Sixth Sense”, with a bit of “The Omen” and just a dash of “The Ring” thrown in there for good measure. Any viewers with a passing interest in horror and thriller films will immediately identify some recognizable devices that this movie uses: a haunted child who frantically scribbles apocalyptic drawings, a world-weary adult with a haunted history, and an oppressively gloomy setting, to name a few. The film spends about the first two-thirds of its runtime cycling through plot beats and character decisions that are frankly, fairly predictable. However, once the movie takes off on its own and begins to do something interesting and unexpected with its story, it’s difficult not to be impressed by the sudden ingenuity on display. The story explores some philosophical and psychological theories towards the beginning of the film, and these erudite discussions become relevant in the last act. The puzzle pieces all come together in a satisfying and surprising way. That doesn’t necessarily excuse the hour that came before it of fairly obvious writing and filmmaking, but it at least makes the journey somewhat worth the while.

​Lead actress Thekla Reuten does an impressive job with her character. She spends a good portion of the movie talking to herself as she works her way through the mysteries of the plot, oftentimes slurring her words thanks to the character’s consistent alcohol consumption, and she believably sells these difficult moments. Her performance is perhaps the most impressive aspect of the film, followed closely by the cinematography. All of the scenes that take place in Scotland are overcast and gray, as they do a lot of the heavy lifting for the film in terms of setting an appropriate mood. This look is often contrasted with the selective use of flashbacks to Marianne’s idyllic past in America, which are lit and filmed in an aggressively sunny manner that reflects the character’s yearning to return to those happy days.

“Marionette” takes quite a long time to do anything ingenuitive, but once it gets there, I was impressed with the unexpected turns the story took. If horror cliches make you feel safe and comforted, it’s worth your time.