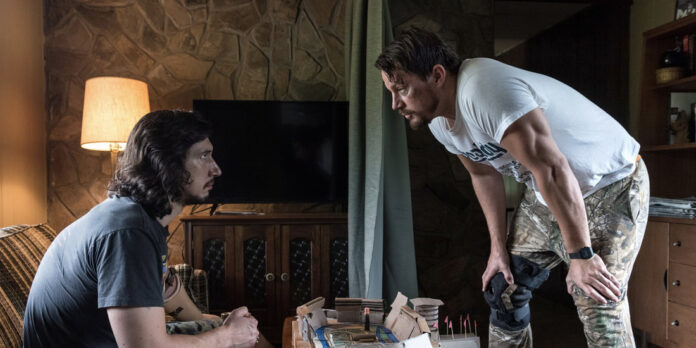 THE STORY – The Logans are a hardscrabble family from the hills of West Virginia, and their clan has been famous for its bad luck for nearly 90 years. But the conniving Jimmy Logan (Channing Tatum) decides its time to turn the family’s luck around, and with a little help from his friends, the Redneck Robbers, he plans to steal $14 million from the Charlotte Motor Speedway.

​It’s hard to think that Steven Soderbergh, one of the most eclectic filmmakers of our time, was considering retirement a few years ago. He is way too important to the filmmaking community to simply stop and with “Logan Lucky” he proves he still has interesting stories to tell, even if he may be rehashing older films he himself already made. You may have heard that “Logan Lucky” is “Oceans Eleven” with Hicks and it is. There’s even a line in the film that mentions the phrase “Ocean’s 7-11.” However, this should not take away from what Soderbergh is trying to provide us with his latest. It’s an enjoyable time at the movies that does not try to bash us over the head with any deep meanings, nor any other serious content. It simply wants to entertain and in Soderbergh fashion, it succeeds.

Taking place in West Virginia, recently laid off union worker Jimmy Logan (Channing Tatum) is in need of a lot of money for a better life for himself and his young daughter. With his ex-wife (Katie Holmes) looking to move across state lines along with her wealthy car salesman husband and their daughter, Jimmy hatches a plan with his sister (Riley Keough) and his one armed brother Clyde (Adam Driver). The plan is an elaborate robbery for the cash taken in by a NASCAR event during the Coca-Cola 600 race. In order to pull it off, the unlucky family enlists the help of incarcerated heist expert and bomb maker Joe Bang (Daniel Craig) along with his smart or not so smart brothers (Brian Gleeson and Jack Quaid).

“Logan Lucky” is not a dramatic foray into storytelling as some of Soderberg’s previous works, such as “Traffic” or “Che.” Rather, “Logan Lucky” is a comedy-heist film that proves that Soderbergh still has a few tricks up his sleeve in terms of entertaining and surprising his audience. Howlingly funny at times and never taking itself too seriously, “Logan Lucky” is pure entertainment. The performances that Soderbergh gets out of his cast are nothing short of a hoot. Channing Tatum continues to show off his range and versatility as a financially desperate father hoping for a better life. Adam Driver is quiet and reserved as his younger brother who works as a bar tender with only one arm due to serving two tours in Iraq. Riley Keough and even Seth MacFarlane as an arrogant superstar race-car driver, also manage to stand out amongst a cast that has many moments to shine. However, the one performance and character most will walk away from this movie thinking about has to be Daniel Craig. Speaking with a high pitched southern accent and accentuating his dialogue to hilarious results, this is not James Bond, who we have come to know and associate with the actor. This is Daniel Craig unlike we have ever seen him before and he’s a consistent highlight in every scene that he’s in.

Filmed in high-definition with a clear and vivid sharpness to his images, Soderbergh makes his method of storytelling appear so easy and effortless. There may be a bit of a lull in the middle of the film where the pacing starts to drag for a bit but Soderbergh pulls it all back together with a typical heist reveal at the end that does nothing short but put a smile on your face. He never belittles the people he’s poking fun at. Instead, like the Coen Brothers have masterfully done in the past, he portrays the characters in his film as real people and not caricatures, thus making their “stereotypical” humor feel more organic and never forceful or exploitative. For those hoping that Soderbergh would branch out and do a totally different kind of film than another “heist” movie would be both right and wrong. I can understand their frustration, as Soderbergh has garnered a reputation for taking on daring and strikingly unique projects, compared to the other films he has made before. However, there is something jovial and humorous at seeing a master of his craft take a genre he’s all too familiar with and simply place it within a different setting. “Logan Lucky” may not reinvent the wheel nor satisfy those with higher expectations but those looking for a straightforward good time will be lucky to catch “Logan Lucky.”