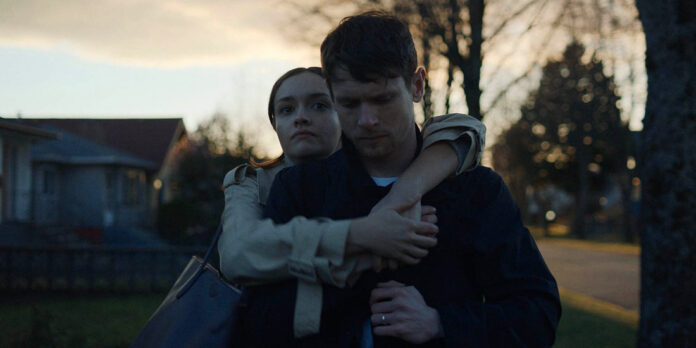 THE STORY – A couple fight to hold their relationship together as a memory loss virus spreads and threatens to erase the history of their love and courtship.

As the world continues to deal with the pandemic’s traumatizing effects, certain pieces of art would inevitably be reflective of such meaningful times. Events that have had significant global resonance often find themselves the subject of creative endeavors, whether they be the main topic of conversation or the undercurrent that simmers beneath the surface of thematic cover. It is fascinating when something comes along that was obviously conceived and produced before such events took place yet echo many sentiments that are expressed in the present. These cases are rather happy accidents that take on a greater meaning when finally seen. In the case of “Little Fish,” what results is a mostly well-executed effort that does fit with the moment but stops short of becoming genuinely profound.

In the film, the world has been stricken with a strange disease that affects the memory of those who become infected. For many, these cases start in small ways until eventually, they lead to severe situations in which entire lives are upended. For Emma (Olivia Cooke), she is witnessing the slow descent of her husband Jude (Jack O’Connell) after his recent diagnosis. Having seen first-hand through friends how distraught their situation can get, they are determined to persevere as best as possible. A potential cure that’s dangled in front of them only complicates things further and pushes society toward the brink. It’s up to Emma and Jude to find a way to appreciate what time they have left before it’s all swept away.

Cooke already received outstanding notices last year for her terrific supporting turn in “Sound of Metal,” and she continues to showcase her talents here. There are moments when she manages to convey layers to her anguished torture that reveal the levels of her subdued emotions. It’s a mostly quiet performance, an example of her internalized work portrayed so effectively. O’Connell isn’t as impressive as his co-star, opting for a stoicism that covers a wavering fragility that’s engaging if not extraordinary. He has undoubtedly given more powerful performances in the past, but he serves the role well. Both of them have warm chemistry with each other and depict the anxiety that fills this relationship in a moving way. There are additional performances from the likes of Raúl Castillo and Soko in supporting roles but the focus is clearly on the leads and they do a fine job at creating an investment in the story.

Chad Hartigan also does a credible job in his directorial efforts. It should be noted that there are times when the filmmaking is on the more pedestrian side and doesn’t always find itself that unique. However, there are flashes of some truly stylistic sequences that mimic the distorted and jagged memory landscape of the characters, and it’s quite an inventive piece of visual storytelling used to enhance the emotional perspectives. This isn’t present throughout the entire piece, and when the style is more mundane, the pacing can suffer. Still, Hartigan’s direction at its worst is merely functional but manages to be a highly creative exercise when honed in on specific moments. The results may be a tad inconsistent, but they show promise of an innovative vision.

Even though one could find issues with other elements of the film, the vast amount of its problems lie within Mattson Tomlin’s screenplay. There’s plenty to read into the parallels this premise has to diseases akin to dementia – or the general concept of losing a loved one to the inescapable nature of time – however, most of these examinations feel surface level and aren’t as deeply prodded as they could be. This leads to the general rules of this world feeling opaque and, in turn, causes any of the rising stakes to seem superficial. The core ideas are promising, but the execution forces a scattered narrative that disrupts momentum at nearly every turn. When the drama is heightened, it seems at complete odds with the more intimate character study being crafted, and the tonal shift is not seamless.

Ultimately, “Little Fish” is a film where the whole is less than the sum of its parts. There’s plenty to appreciate in terms of individual elements on display. The performances are mostly captivating, particularly from Olivia Cooke, and the filmmaking does find imaginative ways to visualize some intriguing sequences. Even the script has some potential with the themes being brought up. However, the story itself struggles to become entirely compelling beyond its shallow commentary, leaving a hollowness to the characters and concepts. No doubt the world will see plenty more films that tackle the present atmosphere of diseases that affect communities on a global scale. One can only hope they be slightly more interesting than what was done here.