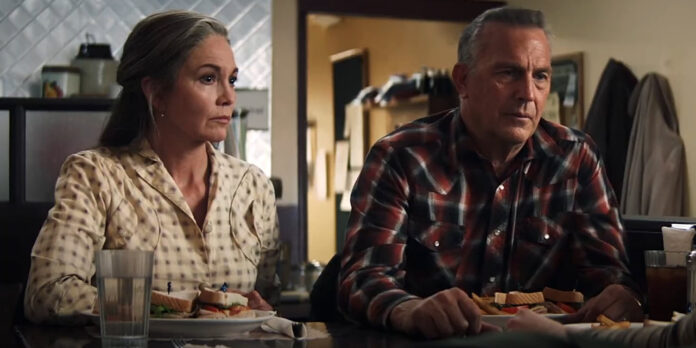 THE STORY – Following the loss of their son, a retired sheriff and his wife leave their Montana ranch to rescue their young grandson from the clutches of a dangerous family living off the grid in the Dakotas.
​
THE CAST – Kevin Costner, Diane Lane, Lesley Manville, Kayli Carter, Jeffrey Donovan, Booboo Stewart & Will Brittain

​​​Name a more iconic duo than Kevin Costner and a horse. It seems like every time I watch a Costner movie he’s riding a horse with picturesque mountains behind him. I guess he’s officially the Hollywood horse guy? For his latest western adventure, Costner plays a retired sheriff living a quiet life with his wife Margaret (Diane Lane), son James (Ryan Bruce), daughter-in-law Lorna (Kayli Carter), and grandson Jimmy (Bram and Otto Hornung). When James is killed in a tragic accident, the family is grief-stricken. Years after the accident, Lorna marries Donnie Weboy (Will Brittain), a man with a violent streak and a terrifying family. Lorna, Donny, and Jimmy move out of town unexpectedly, leaving George and Margaret heartbroken. The two set out on an unexpected journey to find their grandson where they encounter a violent family, a kind stranger (Booboo Stewart), and hope for the future.

“Let Him Go” is a tense thriller tackling themes of familial grief, violence, and letting go in the 1960s Midwest. Director Thomas Bezucha adapts Larry Watson’s novel of the same name, toeing the line of suspense and drama. It begins in a peaceful manner with barely any dialogue but roars to a blaring crescendo. Suspense builds with each passing moment as the outlaw Weboy family is introduced. Bezucha makes the film a tension-filled pressure cooker every second the Weboys share the screen with the Blackledge family. There’s a striking theme of generational violence surrounding the Weboy family. As Blanche (Lesley Manville) walks around yelling out her commands to “her boys” like a mafia boss, I was struck by the horror that the Weboy cycle would never end, and Jimmy would turn out just the same. It’s eerily similar to the darkness present in Netflix’s recent original “The Devil All the Time,” except “Let Him Go” does have hope juxtaposing the darkness in its two leads.

Speaking of the leads, Kevin Costner and Diane Lane give heartfelt performances that pull you into the story. Costner is the voice of reason as the former sheriff grappling with the death of his son. George attempts to persuade Margaret that they are moving in uncharted waters and should proceed with caution. His no-nonsense approach is logical. It’s a quiet and reserved performance for Costner but still packs plenty of emotional depth.

Lane never gives up on her family as Margaret. She’s still riding a wave of grief over the loss of James and won’t entertain the idea of losing Jimmy, too. Even though she’s in a deeply dangerous situation, she’ll do anything for her grandson. Lane brings a kindness to Margaret but will not be trifled with. Costner and Lane have an excellent dynamic together. The two balance each other out and make a believable on-screen couple.

Lesley Manville is, as always, one to steal scenes. If you’ve seen “Phantom Thread,” you know that already. The actress is a chameleon almost unrecognizable as Blanche Weboy, the conniving mother dead set on controlling every move her family makes. At first glance, she seems almost comedic with her theatrics, but her character quickly turns terrifying when she realizes she may not be able to control George and Margaret.

While the actors give some great performances, there are aspects of the film that could have been done differently. It’s clear that James was a deeply beloved son, but he is killed off so quickly. Considering George and Margaret grieve for him throughout the film, it would have been great if we could have seen more of his personality. I would have loved to see James interact with both his parents and Lorna before he died. The film also leads to a third act that, as an audience member, you know will be significant. Yet it’s all a bit too over the top and predictable when it all goes down.

Tense and affecting, “Let Him Go” is a moving drama exploring grief, trauma, and life after loss. Costner and Lane give impressive performances as a couple confronting grief, with Manville lurking in the shadows as a menacing villain. This one will keep you on the edge of your seat.