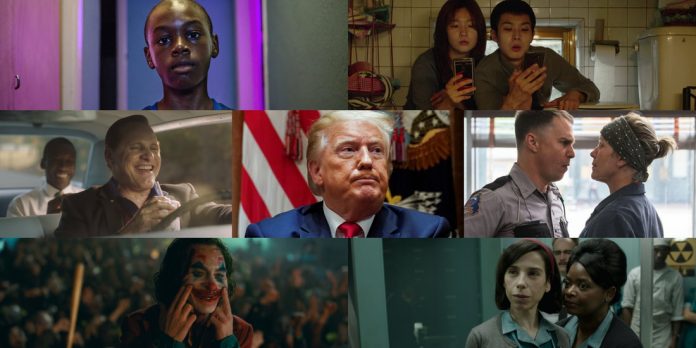 ​When Next Best Picture launched in September 2016, the country was right in the midst of election mania. Yet that didn’t stop Matt Neglia from launching this endeavor into the world of awards and entertainment. In fact, the first time Matt, Will Mavity, and I spoke about starting the site, I had just returned from a Hillary Clinton rally. Suffice it to say that politics have played a unique backdrop for our site and how we interpret the Oscar race. Four years later, life has changed dramatically, but we are still moving forward as a team at NBP, taking on the season and the world day by day. Ahead of Tuesday’s election, here is a recap of the past four Oscar seasons with Next Best Picture.

The stakes were high in 2016. An election, a new website, and general life events. Yet we carried through in our daily day-to-day business, blissfully unaware about what would strike in just a matter of weeks. The vibe over the first half of the 2016 season was light and breezy for the most part. “La La Land” had just premiered at the Venice Film Festival and set Telluride and Toronto ablaze. Talk of an Oscar sweep was imminent. However, a little film made its debut in the rocky mountains of Telluride. That “little movie that could” was Barry Jenkins’ lyrical and soulful “Moonlight,” which captured hearts at first sight. Festival hits from earlier in the year, “Manchester by the Sea” and “Hell or High Water,” chugged along nicely as we also got acquainted with gems such as “Lion,” “Arrival,” and “Hidden Figures.” “The Birth of a Nation” and “Billy Lynn’s Long Halftime Walk” also showed their heads as duds in the race, the latter of which Matt saw in 240fps at the New York Film Festival. Even Mel Gibson’s “Hacksaw Ridge” was there too…a prelude to what we could expect from the next four years as far as the division between what #FilmTwitter wanted to see the Academy recognize versus what they have always traditionally gone for.

We glided through the beginning of the 2016 season convinced that “La La Land” would win as big as Hillary – and then the election happened. A Donald Trump victory flipped the world as we knew it upside down, including our little website. We didn’t know it yet, but the Oscar race had changed overnight. There was a new vibe in the country, and the awards reflected that. Even as “La La Land” continued to sweep the guilds and break records at the Golden Globes, “Moonlight” was still hanging on as the little movie that could. In a time when basic human rights seemed as if they were about to be under siege, here was a film of queer black poetry. It spoke to audiences in a new light. And then came Oscar night, which included a snafu for the ages. Not only was the infamous Warren Betty/Faye Dunaway Best Picture call the most absurd moment in Oscar history, but the winner itself was just as shocking. “Moonlight” had defied all odds to break the stats and reframed the state of Oscars forever. As Next Best Picture continued to make its mark in the world of film awards, it certainly found the most exciting season in which to make a grand entrance. That year also saw another unique outcome in the wake of Trump’s presidency as his immigration ban put a spotlight on Academy Award winner Asghar Farhadi (“A Separation”), who would go on to boycott the ceremony after previously being deemed ineligible to attend due to Trump’s “inhumane” ban. His film, “The Salesman,” would go on to win the Oscar for Best Foreign Language Film.

Next Best Picture’s second Oscar outing came a year into the Trump presidency, which had challenged every norm we thought existed. 2017 went down as one of the great cinematic years in recent memory, with Jordan Peele’s “Get Out” starting off the year. As a matter of fact, the breakout horror satire opened on the weekend of the 2016 Academy Awards and survived an entire year to be crowned with Oscar glory in Best Original Screenplay. The summer would present us with Christopher Nolan’s “Dunkirk,” but the nation turned its eyes to the tragedy of Charlottesville and the murder of Heather Heyer at the hands of white nationalists. How were we to focus on films and awards as horrors occurred in the very streets outside the theaters?

The answer? Taking a deliberate approach to each title and examining it within the context of the world. “Call Me by Your Name” was a beautiful portrait of gay love in a time when LGBTQ rights were being called into question. “Darkest Hour” and “The Post” were true-life tales that showed how strong and measured leadership has the ability to save the day. The aforementioned “Dunkirk” showed resilience in the face of fascism, while “Get Out” displayed our troubled culture through a satirical lens. “Lady Bird” was a rich and personal coming of age fable that dealt with themes of class, as “Three Billboards Outside Ebbing, Missouri” challenged notions of race, rage and forgiveness. But the eventual Best Picture winner, Guillermo del Toro’s “The Shape of Water,” went above and beyond to stand out as the film of the year. A fantasy sci-fi romance about a relationship between a woman and her fishman lover also happened to work as a deeper metaphor. It was a film about resilience. How a deaf woman, a black woman and a gay man stood up against corrupt authorities to protect the “other.” That sense of resilience married with the beauty and wonder of del Toro’s vision made “The Shape of Water” the Academy’s consensus pick of 2017 and one of the most beloved films of the past decade. The world continued to spin in new directions, but our cinematic landscape certainly kept up.

The halfway point of the Trump presidency brought about the 2018 midterm elections that dealt a seismic rebuke to the administration. Nancy Pelosi once again became Speaker of the House as Democrats regained control of the chamber. Voters nationwide showed up in force, yet the nation remained as polarized as ever. So, isn’t it fitting that the 2018 awards season was the most chaotic in recent memory? Starting with the films themselves, divisive titles such as “Vice” and “Bohemian Rhapsody” made their way into the conversation, despite negative-mixed reviews. The latter was one of the more phenomenal sensations I’ve ever witnessed, as the film was downright revered by audiences, grossing nearly $1 billion worldwide. Critics and pundits may not have been impressed with the Queen biopic, but the Academy fell deeply in love, rewarding the project with four wins including one for star Rami Malek. In fact, the only Oscar it lost was Best Picture.

That top prize would end up going to yet another film that fell victim to the critics/AMPAS divide, Peter Farrelly’s road trip buddy drama, “Green Book.” The true story of a friendship between Tony Vallelonga and pianist Don Shirley struck the right note during its premiere at the Toronto International Film Festival and coasted with guilds and awards bodies from then on out. Audiences seemed to fall in love, while tougher critics lambasted the film’s old school approach towards race relations in the United States. Yet, the story about finding common ground in polarizing times met the moment in a way that many still can’t come to terms with. Other top contenders included Yorgos Lanthimos’s “The Favourite,” Bradley Cooper’s “A Star Is Born,” Spike Lee’s “BlacKkKlansman,” and Alfonso Cuaron’s “Roma,” which won the Mexican auteur additional Oscars for his direction and cinematography. Yet even with all these diverse films in the mix, none left as large a cultural impact as Ryan Coogler’s “Black Panther” – as significant a cultural sensation as I’ve ever seen. The Marvel entry about Black royalty and the magical world of Wakanda was as groundbreaking as “The Wizard of Oz” or “E.T..” It wasn’t just a movie. It was a moment. AMPAS responded favorably with a Best Picture nomination – Marvel’s first – and three wins. As the country showed no signs of unity, the Academy certainly found the most unique group of nominees and winners to meet the moment as lines in the sand were drawn between critics and audiences.

As if the previous years weren’t chaotic enough, 2019’s Oscar season was placed against a presidential impeachment trial that swept the nation. Life in Trump’s America is a dark place. Almost as dark as Gotham City in the early 1980s. That may be how Todd Phillips’ “Joker” led the season with 11 nominations. While critics didn’t necessarily praise the gritty character piece, it kicked the season off on an interesting note with a Golden Lion win at the Venice International Film Festival. Many were quick to reject the film as a Scorsese rip-off until an actual Scorsese film made its way into the mix. “The Irishman,” which reunited the auteur with Robert De Niro and Joe Pesci, is a quiet crime epic set against a major backdrop. A career-defining moment for Scorsese and one that critics singled out far and wide, although many audiences struggled with the three-and-a-half-hour running time. Other top-tier contenders included Quentin Tarantino’s nostalgic “Once Upon a Time in Hollywood,” Sam Mendes’ “1917,” Noah Baumbach’s “Marriage Story,” Taika Waititi’s “Jojo Rabbit” and Greta Gerwig’s “Little Women.” There really was something for everyone that season. But the title that ran away with it all was Bong Joon-ho’s South Korean sensation, “Parasite.” A thrilling dark comedy about class and societal roles took the Cannes Film Festival by storm and never let up momentum. “Parasite” was a film that held audiences in its palm for months and months. Easily the hottest movie of the year, and it went the distance. The Next Best Picture team was thrilled to see months of advocacy and passion behind Bong Joon-ho’s masterpiece finally pay off as it became the first foreign language film to win the prize for Best Picture.

Now, here we are. Not even a year after “Parasite’s” historic win and we’re in the midst of a global pandemic set against the most critical election in centuries. Our world has changed dramatically. What does that mean for the Oscars? Time will tell. The pandemic is nowhere near finished and has interrupted the way we consume films. Add to that an election that will define the next generation of this nation. Do we dare continue to fall down this dark path, or do we look toward a more hopeful future? Whatever happens this coming Tuesday, history shows us that the Academy will follow suit appropriately. These are uncertain and unprecedented times that we’re living through. The one thing we can know for sure is that Next Best Picture will be there every step of the way in providing the most informed commentary possible.

​Be safe, be healthy, and make a plan to vote tomorrow. IWillVote.com