“KING ARTHUR: LEGEND OF THE SWORD” 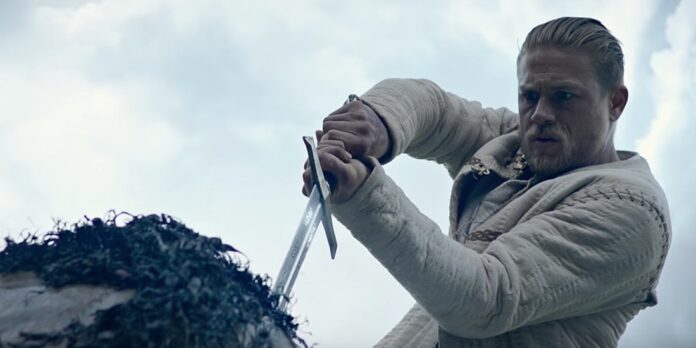 THE STORY – When young Arthur’s father is murdered, Vortigern (Jude Law), Arthur’s uncle, seizes the crown. Robbed of his birthright and with no idea who he truly is, Arthur (Charlie Hunnam) comes up the hard way in the back alleys of the city. But once he pulls the sword from the stone, his life is turned upside down, and he is forced to acknowledge his true legacy whether he likes it or not.

This is not your daddy’s King Arthur. No, this is Guy Ritchie’s, King Arthur. The question is whether Good Guy Ritchie or Bad Guy Ritchie is the one who is helming this Hollywood epic steeped in mythology and folklore. The answer is a bit of both. I went into “King Arthur: Legend Of The Sword” expecting to absolutely hate it but instead (Perhaps because my expectations were so low) I left pleasantly surprised even though this is not an effort from Good Guy Ritchie on the level of something such as “Snatch” but is instead more of a mediocre piece of work from So-So Ritchie.

After murdering his brother, the king (Eric Bana), Vortigern (Jude Law) rises to power and becomes the new feared king of England. The one thing he does not possess is a legendary sword once yielded by the king and can only be used by his true-born heir. That heir to the throne has years later grown to be a man named Arthur (Charlie Hunnam), who has been raised on the streets of Londinium and has had to fight to survive since he was an orphaned young boy. Fate leads to Arthur being the one to yield the magical sword known as Excalibur, which poses a huge threat to King Vortigern and will lead to a personal clash between the two men even if Arthur is unsure if he is ready to accept such a major responsibility and reclaim his birthright.

The biggest issue with “King Arthur: Legend Of The Sword” is tone. This is concerned mostly with the English humor, something Guy Ritchie films are known for. Mostly delivered by serious English blokes, the humor in “King Arthur: Legend Of The Sword” never clicks on the same level as a contemporary piece of work such as “Lock< Stock And Two Smoking Barrels.” However, when the film sticks to the serious tone that Ritchie is more going for (As evidenced by the desaturated and grim cinematography) “King Arthur: Legend Of The Sword” can be quite thrilling at times. There is one set piece in particular during the middle of the film that revolves around an assassination attempt and a breathtaking chase through the city streets which leads to a climatic standoff. This is where Guy Ritchie truly excels, with big quirky set pieces, using his Ritchie-isms such as slow motion, rapid cutting, and quick zoom-ins. Not with trying to create sexual banter between Arthur and the mysterious Mage, known only as “The Mage,” who is played horrendously by Àstrid Bergès-Frisbey. Her line readings will go down as some of the most wooden of the year, even if they are by design from Ritchie’s direction. The final showdown between Arthur and King Vortigern also worked for me on a personal level due to its personal buildup for both characters and the stylistic approach taken by Ritchie which appears to have been influenced by the “God Of War” video games. Probably not, but who knows?

Ritchie’s style both visually and tonally all work within these action set pieces and are backed by an exhilarating score from Daniel Pemberton. However, when Arthur is telling a story to Jack’s Eye (Michael McElhatton) early on in the film, for example, that is where Ritchie needs to learn how to show restraint. With so much cross-cutting and off-beat humor, Ritchie seems to be at odds with himself in what kind of film he is trying to deliver. If he cannot force himself to let go of his trademark style which he has built up over the years, then perhaps the feature film format was not the right place to tell this story. There are multiple times in the film where lots of exposition and story are told via cross-cutting which seems like a cheap editing trick to shave time off of the runtime. Even though the film gets better with its pacing after the middle section, the first half of the film can be quite jarring and is definitely hard to settle into.

With too many underdeveloped supporting characters (Who are Arthur’s knights exactly? We never even get to meet Merlin. Etc.), a breakneck pace that does not compliment the film that well and a lot of exposition to cover, “King Arthur: Legend Of The Sword” is a mess, even if it can be quite an enjoyable one at times. Charlie Hunnam anchors the film with his same dull charisma he has shown in earlier large-scale epic films (Except “The Lost City Of Z.” He’s awesome in that) and Ritchie ultimately does not seem to know what kind of film he ultimately wants to tell with Arthur. Is this merely a cash grab attempt by Hollywood? Is this Ritchie’s attempt to do his own “Game Of Thrones” style cinema? Does Ritchie even have a personal connection to the story? I cannot answer any of these but “King Arthur: Legend Of Sword” certainly tries to do so and the results are bizarre, to say the least. This is not your daddy’s King Arthur. This King Arthur includes giant CGI Animals, senseless murdering, quick-witted banter and some wee lad from the back alleys of Londinium named Arthur who inherits a sword of power against his will that allows him to do some pretty wicked things.

The Next Best Picture Podcast · "King Arthur: Legend Of The Sword"
Powered by JustWatch
Share
Facebook
Twitter
Copy URL
Previous articleMythology And Its Place In Cinema
Next article“THE WALL”