“JUMANJI: THE NEXT LEVEL” 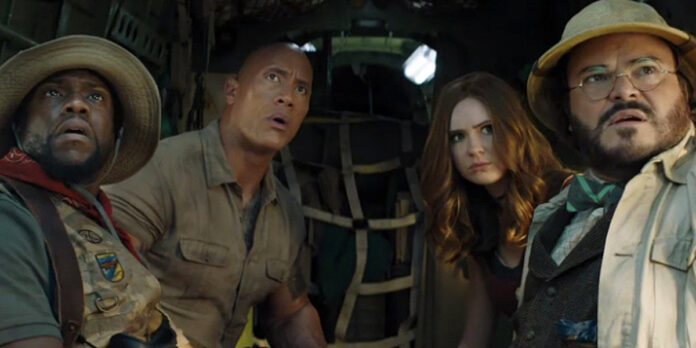 THE STORY – When Spencer goes back into the fantastical world of Jumanji, pals Martha, Fridge and Bethany re-enter the game to bring him home. But everything about Jumanji is about to change, as they soon discover more obstacles and more danger to overcome.

​With the first film, “Jumanji: Welcome to the Jungle,” director Jake Kasdan brought us the hilarious mix of body-swap comedy meets video games meets The Rock. After the nearly billion-dollar success of the first film, an inevitable sequel brings us back into the world of Jumanji. The entire cast returns for the sequel: Dwayne Johnson, Kevin Hart, Jack Black, and Karen Gillan, along with newcomers Awkwafina, Danny DeVito, and Danny Glover. You’re in luck if you liked the first film, as “Jumanji: The Next Level” feels almost identical to it. It’s a blessing and a curse, but thankfully more on the blessing side of things.

After beating the game the first time, Spencer, Fridge, Bethany, and Martha (Alex Wolff, Ser’Darius Blain, Madison Iseman, and Morgan Turner) destroyed it and went their separate ways to college. Since then, Spencer has had a tough time coping with the real world. He’s insecure about his relationship with Martha, he’s lonely at college, and just all around uncomfortable. When the whole team returns home for the holidays, Spencer decides to return to Jumanji, that last place he really felt like he was worth something.

Naturally, when Fridge, Martha, and Bethany discover he’s back in the game, they realize they must go in after him. The console glitches, not letting them pick their characters, and also sucks in Spencer’s grandpa Eddie (DeVito) and his old friend Milo (Glover). The avatars are all switched around this time, with Eddie as Dr. Bravestone (Johnson), Milo as Mouse (Hart), and Fridge as Shelly (Black). The game starts up and they learn of their new quest: To find the Falcon Jewel and restore peace and prosperity to the land of Jumanji.

Look, the actual quest of this film doesn’t matter. They need to get that jewel from some guy, and probably need to fight people along the way. Whatever. That’s all you need to know. The reason we’re really here, though, is for the characters. As I was watching the film, I kept forgetting that they actually needed to go accomplish something. I was more focused on the characters figuring out the world, figuring out who they are, and what they are capable of. All of that works so well, just like in the first film. Each actor is having a blast, and it’s so much fun simply watching them play in this world. Johnson is channeling DeVito, while Hart is channeling Glover, and they play well off of each other. Black is still the MVP, though, giving a truly hilarious performance as Fridge. He gets the biggest laughs but never goes over the top.

The well-written comedy takes the film pretty far. While they try to craft a story around it all, the best parts are when the actors get to riff and play around, not when they’re actually trying to solve the quest. The movie loses a good bit of steam in the third act as it tries to get you to care about the video game’s plot. I never did, nor could I even tell you much about what they needed to do other than save Spencer. Even so, “Jumanji: The Next Level” admirably recreates the feeling of playing a video game. There’s a scene with a series of rope bridges that need to be crossed in a specific order that feels right out of “Uncharted.” It’s also fairly thrilling, even without caring about the grander stakes of the quest.

There’s no denying the feeling of déjà vu. It’s a recreation of the first film in so many ways, with slight tweaks to make it feel new. The good thing, though, is that the first film works pretty well as an action-comedy, so this one does as well. I laughed quite a bit thanks to the dedicated performers. The filmmakers found a winning mold and decided to do it again. I can’t really fault them for that. It may lose the freshness, but there’s still so much wit here that makes it a worthwhile adventure. If you liked the first film, you should quite enjoy “Jumanji: The Next Level.”