“JOHN AND THE HOLE” 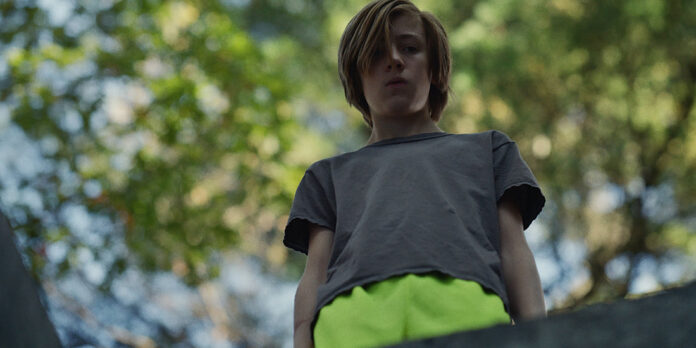 THE STORY – While exploring the neighboring woods, 13-year-old John (Charlie Shotwell) discovers an unfinished bunker—a deep hole in the ground. Seemingly without provocation, he drugs his affluent parents (Michael C. Hall and Jennifer Ehle) and older sister (Taissa Farmiga) and drags their unconscious bodies into the bunker, where he holds them captive. As they anxiously wait for John to free them from the hole, the boy returns home, where he can finally do what he wants.
​
THE CAST – Charlie Shotwell, Michael C. Hall, Jennifer Ehle & Taissa Farmiga

​​​​​Adapted by screenwriter Nicolás Giacobone from his own short story, a mother tells her daughter a story. It’s a story that, on the surface, is simple and one might assume it would have something more stored underneath. The story is “John And The Hole,” a dark fable about a privileged angsty teenager who imprisons his parents in a hole in the ground so he can gain total selfish freedom from all responsibility. What kind of a tone should this take, I wonder? With so many possibilities and so much potential, it’s incredibly disappointing to discover that this hole doesn’t go as deep as it should.

13-year-old John (“Captain Fantastic’s” Charlie Shotwell) has found an unfinished bunker deep in the ground in his neighbor’s backyard. Suddenly, a plan is hatched and without rhyme or reason, he drugs his wealthy parents (Michael C. Hall and Jennifer Ehle) and older sister (Taissa Farmiga), drags their bodies to the bunker and leaves them there. He provides food and water occasionally but no answers.

Shot in 4:3 academy ratio by cinematographer Paul Ozgur, one gets the sense that debut director Pascual Sistois was going for a constricted and unsettling thriller, maybe even a horror film in the vein of Michael Haneke, before the film’s title appears on the screen nearly a half an hour into the runtime. However, Sistois can’t commit to a tone. The film veers into dark comedy territory as we bear witness to John’s splurges of his parents’ money on junk food, a new HD TV and in one particular case, simply giving the money away to his friend. And that’s the thing; John is still interacting with people while his family is imprisoned. It’s clear he hasn’t thought this through thoroughly enough and is trying to drag it out for as long as he can. We all know it has to end at some point and it feels like the film is building towards an exciting climax. However, what we’re left with while making sense thematically, feels undercooked and nowhere near as exciting as what the initial premise contained. Even the narrative framing device between the mother and her daughter she’s telling the story to lacks emotional payoff and remains just as vague as the story between John and his parents.

John wants to prove himself as an adult and even goes so far as to wearing robes, suits, cooking risotto and drinking wine to show his family that he can take care of himself on his own despite being only thirteen years old. Charlie Shotwell gives off a creepy vibe as the mysterious John, whose motivations are never fully clear to his family nor the audience. Michael C. Hall, Jennifer Ehle and Taissa Farmiga all deliver strong supporting performances that communicate their confusion, frustration and desperation to their cold and emotionally disconnected son. They just want answers from him. They even start apologizing for reasons which they don’t even fully understand. If you’re seeking answers as a viewer outside of Sisto’s surface-level answer, then you will be sorely dissatisfied.

Much like the drone that John flies over his backyard, “John And The Hole” starts off well, with an intriguing premise and an ambiguous tone that is creepy and unnerving as we don’t know the movie’s full intentions yet. Then, just as the drone suddenly veers off course and crashes back down to the ground, so too does Pascual Sisto’s directorial debut as we begin to realize that the final product is not meeting the full potential of its premise. An engaging visual style and the performances from the cast may entice viewers to give this a watch but this is one shallow hole.