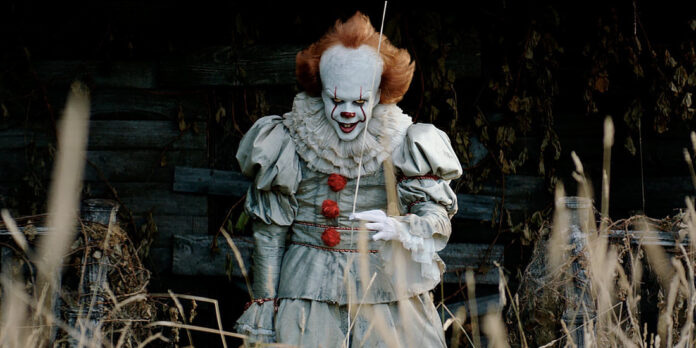 THE STORYWhen children begin to disappear in the town of Derry, Maine, neighborhood kids band together to square off against Pennywise, an evil clown whose history of murder and violence dates back for centuries.

Well, that was frightening. In what might go down as the most Stephen King of Stephen King adaptations, the 2017 version of “It” (Which will also inevitably be split into two parts with the sequel due out sometime in 2019) is everything that fans of the horror mastermind are hoping for and more. Much more. In fact, so much more that after nearly two and a half hours, the results are almost unbearably intense. Filled to the brim with unique set pieces, suspense, dread and enough jump scares to fill a lifetime, “It” starts to stumble a bit in its third act as it continues to push audience’s limits on how much they can endure.

Taking place in a quiet suburban town called Derry, “it” tells the story of William “Billy” Denbrough (Jaeden Lieberher) whose younger brother Georgie (Jackson Robert Scott) goes missing. What Billy doesn’t know is that Georgie was taken by a mysterious, horrifying, supernatural demon that takes the form of a clown known as Pennywise (Bill Skarsgard). Pennywise has the ability to take the form of its victim’s deepest, darkest fears and slowly begins to terrify the other children from the neighborhood. One of Billy’s friends, Ben Hanscom (Jeremy Ray Taylor), discovers that the demon only manifests every twenty seven years upon the town. When Billy and his friends (Known as The Losers Club, also starring: Sophia Lillis, Finn Wolfhand, Wyatt Oleff, Chosen Jacobs and Jack Dylan Grazer) start getting targeted by the demon, the kids decide to overcome their fears and confront the demon head-on.

“It’s” main source of heart, derives from its cast of child actors who are all filled with charm and believable chemistry, making them easy to root for. Their bond, forming the “Losers club” is endearing and leaves the viewer with a sense of excitement for what the future holds for them. We’re pretty sure that much like the television miniseries from 1990, the sequel will pick up these character’s lives twenty-seven years after the events which take place in this film. It is a testament to the actors, writers, and director that these children feel very fleshed out and distinguishable, laying the groundwork for what the sequel can build upon. Special mention also needs to be paid to Bill Skarsgard who, with all due respect to the legendary Tim Curry, creates a Pennywise for the new generation that is sure to go down horror history. With bizarre speech patterns, terrifying body movements and an imposing stare, Skarsgard portrays the character in such an iconic way that this may go down as the role he is most remembered for.

Director Andy Muschietti shoots the film with a brilliant eye for composition and crafts memorable cinematic moments that are sure to linger in your mind once the film is over. There is no doubt in my mind that you’ll be having nightmares once this film is over. The manner in which he frames every scene, with ominous shadows hovering in the backyard, you’re expecting something to jump out at any second. Sometimes it does and sometimes it doesn’t. Muschietti always keeps us on our toes, always on the edge of our seats and always gasping for air. The pacing of the film is absolutely relentless and this is where the negativity comes into play. For a film that gets so much right under the large studio system, it still suffers from bloated excess. There are plot lines, such as the one involving a psychopathic bully named Kenny Bowers, which leads nowhere and does not have a real impact on the plot or the characters. There are one too many “jokes” thrown in by the kids to try and lighten the mood. Realistically, all of these minor complaints can be chalked up to an extended runtime that reaches a high point once the kids enter into the creepy haunted house to confront Pennywise. Once they emerge, it feels like the film has reached the high point in terms of how much it can scare us and push these characters. Turns out, there’s still another twenty minutes of scares and anguish to put these children through before the film reaches its emotional conclusion.

The emotion of the story is where the film redeems itself in the end. “It” is a movie that preys upon our fears and what do our fears stem from? Anxiety. Trauma. Memory. Memory is the key here. The film takes place in the late eighties and much like how the Netflix television show “Stranger Things” won our hearts over due to its trip down memory lane, “It” not only does that for the audience but for the characters as well. Billy remembers his little brother Georgie and sets himself off on a quest to understand the trauma which befell him on that day his little brother was inexplicably taken away from him. There is a lot of emotional power to be found within “It,” just so long as it isn’t being bogged down by the constant jump scares and occasional gore. While there are a few stumbling blocks here and there, this supernatural horror film floats perfectly fine.

The Next Best Picture Podcast · "It"
Powered by JustWatch
Share
Facebook
Twitter
Copy URL
Previous article
“SHOT CALLER”
Next article
On The Ground At TIFF: Days 1 & 2