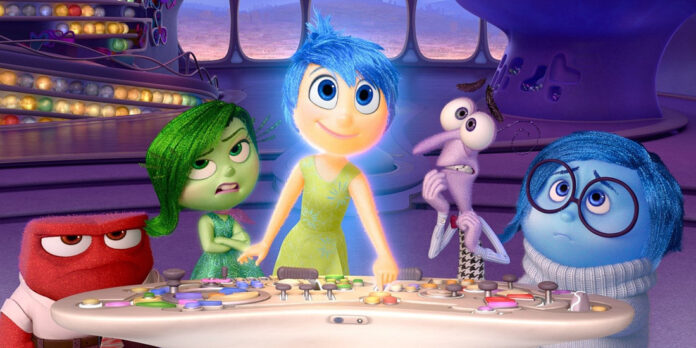 ​By the mid-2010s, Pixar had gained a solid reputation for being able to wring emotion out of nearly any subject, from toys to fish to futuristic robots. So when they decided to make a film where personifications of emotions were the main characters themselves, those of us who are afraid of crying in public knew we were in trouble. “Inside Out” is an achievement of world-building and screenwriting in ways that are rarely seen in any movie, let alone an animated film ostensibly aimed at children.

The movie mostly takes place inside the head of an eleven-year-old girl named Riley, where her five main emotions (Joy, Sadness, Anger, Disgust, and Fear) help govern her actions and reactions. When Riley and her family suddenly move from Minnesota to San Francisco, the inner workings of her mind are thrown into turmoil. Through a series of events, Joy and Sadness find themselves lost far away from the main control center which they usually inhabit. In their journey back, they must work together and discover new ways to deal with the stresses that life throws at Riley and the emotional blows of daily life, both big and small.

What makes this movie so miraculous is the absolutely genius world-building. In a seamless exposition, we are taught how exactly this realization of a mind works, which sets up the importance of many different aspects of this world. And in typical Pixar fashion, once these worlds start experiencing trouble, we have already been provided with enough set-up that we understand the dramatic weight of these moments immediately and intuitively. We are able to feel devastated for seemingly abstract things like Riley’s “islands of personality” and an imaginary friend named Bing Bong. By the time we get to the final act, the world has been so perfectly set-up that we are able to comprehend exactly what characters are doing and what it means in a world that has been completely invented for the movie. The screenwriters are also able to conjure an endless supply of mind-based humor out of this world: jokes about the workings of dreams, how the subconscious operates, and basic emotional reactions to outside stimuli play as both specific to the film’s circumstances and universal to anyone watching it who has a brain.

Beyond the achievements of the story and writing, the technical aspects of the film are top notch. The character designs of the five emotions and the aforementioned Bing Bong are specific and brilliant: from the shimmering dots of color that radiate off of the emotions to the cotton candy body of Mr. Bong, they are a joy to look at. They also all move in ways that are specific and true to their characters: Joy twirls, leaps, and dances in a thousand different ways, while Sadness is more muted with her physicality. In addition, the sound design is deserving of note in particular. For a world that is completely made up and new, they use a wide variety of real-world sounds to perfectly give objects weight and texture (the memory orbs, in particular, have a very satisfying glass sound whenever they touch each other).

And the voice cast is deserving of praise across the board. Amy Poehler uses her sunny-sounding voice and rapid-fire vocal speed to bring appropriate energy to Joy, but she is also able to bring the proper weight to more serious moments. And Phyllis Smith of “The Office” fame brings the perfect tone to Sadness. Richard Kind is also a stand-out as Bing Bong, using his specific vocal patterns and accent to bring a goofy character to life.

If I were forced to find a critique with this movie, I suppose I could say that some of the humor is a bit immature (the character of Fear, in particular, is mostly reduced to slap-stick, a brand of comedy that doesn’t work on me). But then again, the movie is literally set in the mind of a child so this does make sense. Pixar has also set an extremely high standard for themselves in these past 20+ years, so any movie they make is immediately compared to their greatest accomplishments. Is this as technically marvelous as “WALL-E” or as emotionally satisfying as “Toy Story 3”? No, but that doesn’t mean that it isn’t an overall enjoyable experience.

“Inside Out” is yet another exercise in what animation can do best that live-action can’t even attempt to accomplish. Its imaginary world is both fun to spend time in and well-established in its geography and rules, and the characters, even though they are personifications of abstract concepts and feelings, are a blast to watch. This film is yet another achievement from a studio that remains king when it comes to universally-satisfying storytelling.