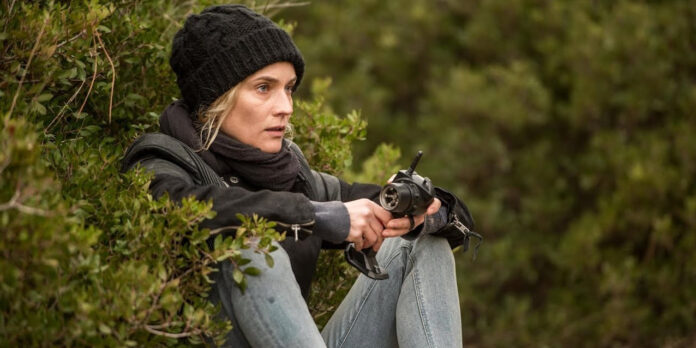 THE STORY – Katja’s life falls apart in the blink of an eye when two neo-Nazis kill her husband and 6-year-old son in a bomb attack. Her quest for justice soon pushes her to the edge as the two suspects stand trial for murder.

​After what might be the most off-putting, morbid and trite cinematic experience of 2017 for me, I am here to tell you that “In The Fade” is the equivalent of being taken through the seventh layer of hell. Nothing good can come of it. There is no escaping it. It’s just you and Diane Kruger for 106 grueling, agonizing minutes of pain before to blows itself to kingdom come in the final act. Kruger does the best that she can to make you believe that the journey is worth it. She does succeed (In a way), but by the time it was over, I was left wondering just what exactly writer/director Fatih Akin was trying to get at with his dark revenge drama.

The film is broken into three acts, thus making it very easy for me to express my feelings on Akin’s film accordingly. The first act is called “The Family” and it explores the loss of Katja Sekerci’s (Diane Kruger) family via a terrorist bombing attack, the introduction of her parents and in-laws, her friends and her trying to come to terms with what has happened. With no initial leads on the case, her husband’s previous criminal background overshadowing the current open murder investigation, Katja becomes near suicidal until it is revealed that neo-nazis were behind the attack and then we head into the second act titled “Justice.” It is here that Katja and her lawyer/friend Danilo (Denis Moschitto) attempt to bring the accused to justice for their hateful actions. The outcome of the trail leads to the final act titled “The Sea” which takes Katja to Greece.

As I said before, Diane Kruger is the reason to watch “In The Fade.” Her tormented, dramatic and soulfully crushing portrayal of a grieving widower who can never be at peace in the aftermath of her husband and son’s death is heartbreaking and intense. She has numerous scenes where her emotive power commands your attention, forcing you to never take your eyes off of her. She is a true force to be reckoned with here and it helps that she is in practically every frame of the film, as we never break away from her point of view. Akin’s camera follows her (Sometimes with too much needless movement) as she grieves for her family and thirsts for vengeance on those responsible. Along with the constantly moving camera, the film utilizes unnecessary dissolve edits to keep the story moving and misplaced musical queues which don’t do anything to enhance the film. As such, the film would have been better off (And filled with more tension) had there been no musical score at all.

“In The Fade” has a good hook with its first act despite a few problems. It finally settles into an engrossing story set within the confines of the courtroom where Danilo and Katja go toe-to-toe with the defendant’s lawyer Haberbeck (Johannes Krisch). But then, with its third act, “In The Fade” goes completely off the rails in a totally ridiculous and morally vacant finale that is neither emotional or as captivating as what came before.

Walking out of the film, the best comparison I could come up with to explain the ridiculousness of what I had just seen could be summed up by saying “The Foreigner” without the action elements, a lot darker and an emotionally unsatisfying ending. One could see what Akin was trying to do in telling a story of hatred and violence, set in modern-day Germany nearly one hundred years removed from Hitler’s rise to power. Perhaps the answers have faded away just as Katja Sekerci’s family does in the first act. Either way, this is a story that is merely meant to be an acting showcase for Kruger and nothing more.​