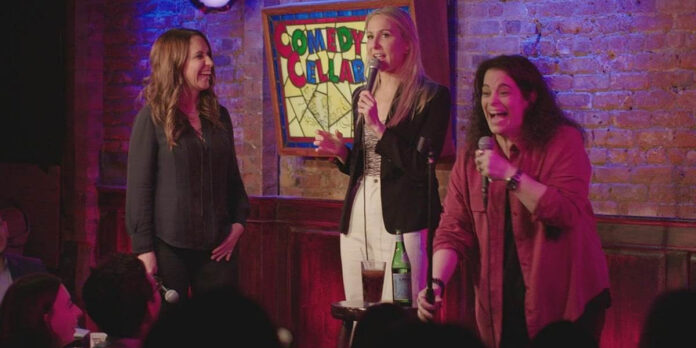 THE STORY – “Hysterical” is an honest and hilarious backstage pass into the lives of some of stand-up comedy’s most boundary-breaking women, exploring the hard-fought journey to become the voices of their generation and their gender.
​
THE CAST – Margaret Cho, Fortune Feimster, Rachel Feinstein, Marina Franklin, Nikki Glaser, Judy Gold, Kathy Griffin, Jessica Kirson, Iliza Shlesinger & Lisa Lampanelli

​​​Stand-up comedy has always been fertile ground for documentaries. It’s a multi-faceted art form, and compelling films have been made about the craft, the road life, and comedians’ personal struggles behind the scenes. These personal struggles are often filtered through a male perspective, given the old adage of comedy being a “man’s game.” “Hysterical” takes a sledgehammer to this outdated notion. The FX documentary assumes the vantage point of female comedians, and the results are both revelatory and refreshing.

The documentary is helmed by Andrea Nivens, who does a stellar job of compressing dozens of interviews and unique perspectives into a coherent and compelling whole. “Hysterical” may initially seem like a loose collection of jokes and anecdotes, but the power of the film comes through when you realize it has a tightly-defined structure. It plays much like a good stand-up set: it starts off casual and general before honing in on genuinely thought-provoking insight.

“Hysterical” is unflinching when it comes to the horrific conditions that female comedians have to endure, whether it be from elitist male peers or inappropriate fans. The details that Glaser, Gold, and company share regarding their experiences are sobering, especially when considering how recent some of these experiences were. During this particular section, the documentary hones in on an important notion: female comedians are not praised for using pain in their comedy the same way that men are. Female comedians discussing their trauma onstage has historically been discouraged, and the footage of audience members jeering them onstage is skillfully interwoven for maximum impact. We can’t help but feel the same frustration they do.

The documentary is broken up by title cards that define comedic terms like “stage time” and “hysterical.” The latter is another clever nod to the artform’s gender bias. It refers to the pejorative meaning (something funny) and the original, female-centric meaning (showing signs of hysteria). These title cards serve more than a simple aesthetic purpose, however. Nivens uses them to subtly break up each section of the documentary and serve as jumping-off points for the comedians to tackle the different subject matter.

Nivens, along with editors Andrea Lewis and Dava Whisenant, construct a layered visual tapestry of home movies, taped comedy specials, and archived clips from movies and shows of the 1950s. They manage to flesh out the history of women in comedy with minimal brushstrokes, which gives context to the talking heads without taking away from the narrative flow. The trio also hit on several fantastic transitions that see the stand-up comedy of one comedian segue directly into a topic of discussion for another. For a documentary subject as well-trodden as stand-up comedy, it’s little details like these that make “Hysterical” stand out from the crowd.

Of course, what I’ve neglected to mention thus far is that “Hysterical” is, in fact, hysterical. The stand-up bits that are included are top-notch, and talking heads often had me laughing out loud. It’s remarkable to see a comedian discuss harrowing topics and twist them into joke fodder in real-time, but we see it again and again over the course of the film’s runtime. These moments not only enhance our admiration for each comedian’s talent but their tenacity in being able to make lemonade out of life’s lemons. It’s certainly not an easy thing to do, and it’s an ability that separates the amateurs from the pros.

My only real gripe with “Hysterical” is that it sometimes leaves a topic when there’s still more to explore. It makes sense given the relatively brief runtime and the lengthy roster of comedians to consider. Still, it’s a shame more screen time wasn’t dedicated to Kathy Griffin’s infamous “Trump head” photoshoot or the way Bill Cosby’s crimes reverberated throughout the comedy community. However, these are minor quibbles, and those looking for insight into these topics will still find plenty to chew on.

Overall, “Hysterical” is a vital film about a vital group of comedians. The meshing of content and presentation is organic, the blending of subject matter both serious and silly is skillfully handled, and the weighty themes never come at the expense of the entertainment value. It’s a must for comedy fans, but its quality leads me to believe it can connect with casual audiences as well.