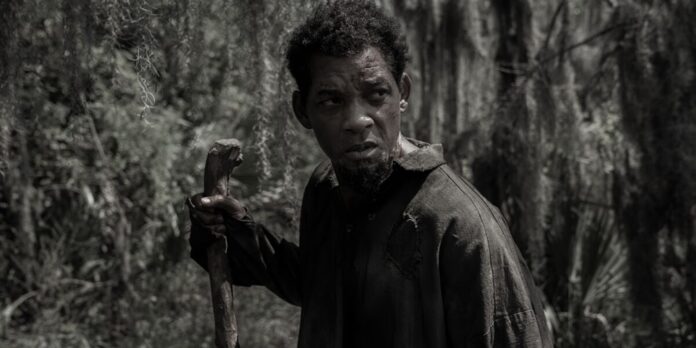 THE STORY – Peter, a slave, flees a plantation in Louisiana after he was whipped within an inch of his life. He has to outwit cold-blooded hunters and the unforgiving swamps of Louisiana on a torturous journey north.

Depicting any dark chapter of world history is a task that should never be taken lightly. Any dramatization of disturbing and upsetting events can be a vital exercise in exposing real truths that can often go unspoken for far too long. The subject of slavery as linked to the existence of the United States is an ugly matter whose effects have never fully dissipated to this day. The range of success from storytellers who have attempted to extract a deeper understanding of such atrocity has run the gambit. Some aim for nuanced portraits; some are explicit and direct, while others may struggle with a tonality that lacks authenticity. There is no doubt one can feel the earnestness in “Emancipation” for its attempt to portray a harrowing journey. Unfortunately, the results are a piece that is far too unwieldy to be sufficiently impactful.

Set during the midst of the Civil War, a group of slaves on a Louisiana plantation are forcibly removed in order to assist with the construction of a railroad for the Confederate Army. Among them is Peter (Will Smith), dragged away from his wife and family to work under cruel and inhumane conditions. During this time, he learns of monumental news: President Lincoln has enacted the Emancipation Proclamation, declaring all slaves free. Of course, the slave owners have no intention of letting what they believe is their property leave. So, Peter and a few companions escape on their own, intending to travel toward Baton Rouge and be saved by the Union soldiers. In addition to battling the harsh elements of the alligator-infested swamps, they must also evade their pursuers, including the determined and sadistic Jim Fassel (Ben Foster). Peter must endure hell in order to find deliverance and save his family from this horrid fate.

Smith’s central turn here is one that is a reminder of not only his magnetic screen presence but the power he can communicate as a performer. There is an obvious physicality to the role that is impressive on the surface, but one can also glean the desperation and tenacity in every glare of his fierce eyes. Within him is both a strength and vulnerability that Smith can effortlessly expose, all while feeling in complete command. It’s no surprise he is the only memorable note of this ensemble, populated mainly by capable actors that just don’t serve as much impact. Foster is the only other significant player, and he sadly leaves much to be desired. Most of the blame can be laid on the material he is provided, but he still gives an oddly affected performance of little depth. It is a shame to see such a talented actor showcase work so uncompelling, but his chief antagonist is never quite as captivating as it should seem.

Antoine Fuqua’s filmography is filled with solid efforts that mostly have the objective of mainstream entertainment above anything else. The ambition displayed on the screen here is unmatched in nearly anything he has done before, and it’s hard not to be impressed at some points. The level of craftsmanship is exceptional, particularly in the film’s first act. The encampment that Peter is brought to is an exceptional piece of production design, finely textured by the immersive sound work that also captures the muggy environments and thunderous battle sequences. The one aspect that is not as strong is Robert Richardson’s cinematography, intentionally employing a grayscale to emphasize the surrounding bleakness but only washing out the monotonous locations. Yet, the rousing score does wonders to compensate and pairs nicely with the imagery. Occasionally the flare of Fuqua’s direction is a bit overzealous, but one can appreciate what he brings to the film.

All of these positive facets, though varied in quality, are nearly canceled out by the most significant detriment, that is, the screenplay from William Collage. What begins as an engrossing examination of the horrific events cast through a detailed lens becomes far more stale and generic once things morph into a survival epic. These scenes have some tension but are far less interesting from a thematic perspective, further indulging in blunt dialogue and broad characterizations. A hard shift is introduced in the last act to focus more on the actual wartime bloodshed, but the switch is so abrupt and does not adequately allow time to invest in these new stakes. One senses this script is overstuffed, which ultimately leaves the storytelling tedious and unsatisfying. The foundation is built upon far too many contrivances to move the plot along, the sum of which is a deeply flawed narrative that consistently undercuts every other impactful occasion.

One can be taken in by some powerful moments in “Emancipation.” The distressing situations conjure true anxiety in the presentation, and the totality of the craft is notable. These elements are at odds with a story that lacks the necessary complexity to allow for a more resonant exploration of character and theme. While there is an imposing performance from Will Smith and some exceptional below-the-line achievements, the hollowness that lingers is one that artificially constructs the forward momentum. The screenplay rings too many false notes where one is obstructed from connecting with the overall tone. That is the most challenging obstacle for the film to surmount, and it, unfortunately, fails to do so.