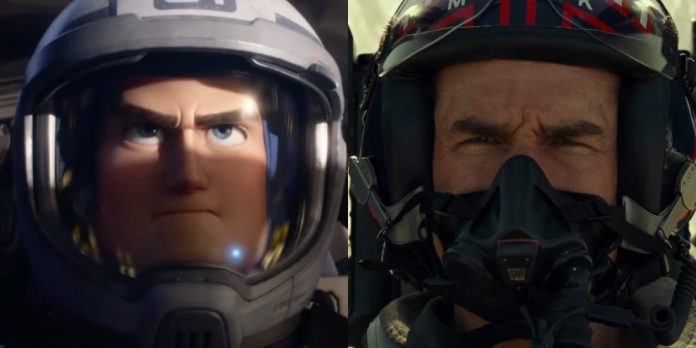 On Fathers Day weekend, “Top Gun: Maverick” further cemented itself as the hit of the summer, with one of the biggest fourth weekends of all time as it neared a $500 million domestic box office total overall. On the polar end of the spectrum, “Lightyear” got perhaps the worst box office headlines for a would-be blockbuster this summer, with an underperforming opening weekend that put it below “Jurassic Park: Dominion” and only just above “Top Gun: Maverick.”

But perhaps it is somewhat both fitting and ironic that “Top Gun: Maverick” and “Lightyear” have such different box office performances since they are kind of the same movie. Or at the least, they are two sides of the same coin in telling the same story with a similar iconic main character. Both movies are about legendary fighter pilot characters who first broke out and forever changed blockbuster culture decades ago. Maverick’s debut in “Top Gun” became the biggest film of 1986 and made Tom Cruise perhaps the biggest human movie star for decades more. Almost a decade later, Buzz Lightyear’s debut in 1995’s “Toy Story” was an equally massive hit that began the age of Pixar and computer-animated movies.

Decades after that, both Maverick and Buzz happened to return in the same summer, although “Top Gun: Maverick” was technically supposed to come out in summer 2020. But by COVID and happenstance, the return of Maverick and Buzz arrived weeks apart, in projects with a lot of skepticism. Just as many wondered if a “Top Gun” sequel was essential decades later, an origin story about the movie character that the Buzz Lightyear toy was based on faced the same questions. Yet, according to most critics and box office totals (so far), only “Top Gun: Maverick” successfully answered those questions.

The raves for “Top Gun: Maverick” and the merely mixed-to-good responses for “Lightyear” are as different as night and day. Since they are both films about famously cocky, heroic, and action-based characters – with Cruise only slightly less animated and more grounded on Earth than Buzz Lightyear – it is funny that they have such different performances and box office results thus far. It is also pretty rare to have Pixar getting so severely beaten at the box office and in reviews by another summer blockbuster, although it is getting further and further removed from Buzz and the Toy Story franchise’s perfect glory days anyway. Nonetheless, box office and reviews aren’t the only things that separate these two otherwise very similar movies.

“Top Gun: Maverick,” like its predecessor, largely falls to its feet, glorifying both Maverick and Cruise himself. Of course, between Maverick’s lingering guilt over his dead wingman Goose, his clashes with Goose’s son Rooster and a career hanging on by a very thin thread, not everything comes easy for him. Still, in “Top Gun: Maverick” and in Cruise tradition, he is ultimately lionized for defying his more by-the-book superiors, showing that it takes more than advanced hardware to finish the mission, and delivering a feel-good if not vaguely defined victory for the American Navy.

“Lightyear” could have very easily followed that same formula. In fact, since the movie is supposed to have been Andy’s favorite film, it might have come out at or near the same time the original “Top Gun” did. If it had, then it would have been even more fascinating as a companion piece and a compare and contrast piece to how Buzz’s stunts and heroics aren’t quite as celebrated as Maverick’s. Buzz makes many more mistakes than Maverick, if not deadlier ones, as his inability to accept help from other Space Rangers and his automatic pilot get him and his crew stranded on an alien world. In most movies, this is where Buzz’s efforts to make things right would quickly make him a redemptive hero. But in this case, his every plan to fix his mistake backfires, as he test pilots a hyperspace crystal that keeps sending him four years forward in time – while his best friend and fellow Rangers actually settle down and make a new life without him.

When Buzz’s final desperate test takes him even further in time, to the point where the planet is under attack by a robot army, his only chance rests on him teaming up with an inexperienced team of would-be Rangers – including his late best friend’s granddaughter. This has more than a few echoes of “Top Gun: Maverick,” which also hinged on Maverick leading and training a rag-tag team of younger pilots, including his late best friend’s son. But while Maverick got his younger team into shape and molded them into his image, it isn’t quite like that for Buzz. While his new team is somewhat unqualified, they are the ones who wind up helping him adapt as much as he helps them. In fact, he is the one who has the most to learn as he finally realizes his mistake wasn’t just a mistake and that he is literally his own worst enemy in his inability to move on.

While Maverick keeps getting chance after chance by the grace of his former rival Iceman and his own undeniable skills, Buzz isn’t let off the hook so quickly – or rather, won’t let himself off the hook as he keeps failing to see beyond his guilt. Then again, Maverick has a hard time seeing beyond his own guilt over Goose’s death, to the point of outright stalling Goose’s son’s own naval career. Nevertheless, doing things Maverick’s way still saves the day, although Buzz is a different matter.

While Buzz is the big hero in the end, just like Maverick, he has to look hard at himself and his methods to get there and ultimately accept he can’t do things like he’s always done. As it stands, for those who see “Top Gun: Maverick” and Cruise’s filmography in general as just one long tribute to himself and his characters’ greatness – if not Cruise’s own – “Lightyear” might stand out for taking a slightly different view at a famous character’s go-it-alone heroics.

Of course, “Lightyear’s” Buzz is not the same as the toy version of Buzz, so it’s not really rethinking the same character. And while Maverick is the same character he was back in 1986, he has become a bit more weathered by age, guilt, and lost chances over time. Both Maverick and Buzz still redeem themselves by the end, but they take different paths, with varying means of self-realization, to get to the same destination. However, only one reached a far grander destination with critics and the box office, while the other may be labeled the biggest blockbuster flop of the summer.

Maybe it says something about America and what it is looking for right now, that the hero who puts himself and his brand of heroics on a pedestal of his own design is soaring higher than ever before, while the one who has to take a harder look at himself and his methods of heroism is facing a box office crash landing. Yet plenty of MAGA Tim Allen fans, protestors of Disney’s latest one second of LGBTQ+ affection, and families who just want to wait for “Lightyear’s” Disney+ debut are getting the most credit for that so far.

But beyond that and everything else, the fact is that “Top Gun: Maverick” is the feel-good hit of the summer in both creative and box office quality, while “Lightyear” is now the latest poster child for struggling origin/legacy movies no one ever really asked for. Still, these are vastly different places to end up for two movies that kind of started from the same place.

Have you seen “Top Gun: Maverick” and “Lightyear” yet? If so, which of the two did you enjoy more? What do you think the box-office performance of both says about the modern moviegoer? Please let us know your thoughts in the comments section below or on our Twitter account and be sure to check out the Next Best Picture team’s latest Oscar predictions here.