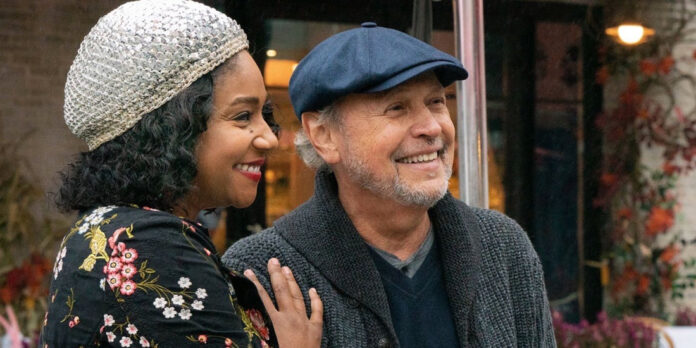 THE STORY – When veteran comedy writer Charlie Burnz meets New York street singer Emma Payge, they form an unlikely yet hilarious and touching friendship that kicks the generation gap aside and redefines the meaning of love and trust.

​​​Billy Crystal’s characters love creating hilariously over-the-top moments in restaurants. In the infamous “When Harry Met Sally” deli scene, Sally (Meg Ryan) puts on quite the show when she demonstrates to Harry just how easy it is to fake a big “O” – enough to make one woman want to “have what she’s having.” In “Here Today,” albeit not as iconic, Charlie Berns (Crystal) is joined by Emma Payge (Tiffany Haddish), who, after ordering almost every oceanic creature off the menu, finds out she has quite the seafood allergy. Her face puffs up, making it difficult to understand her. People in this restaurant likely didn’t want to have what she was having.

Though “Here Today” starts off strong with a comedic lens, there are awkward tonal shifts and overly dramatic moments throughout that will likely leave audiences wondering if they’re meant to be watching a comedy, drama, or something else. This is Crystal’s first film that he has directed and written in two decades, and it seems he was a little rusty.

Charlie is a successful comedy writer who has also worked on Broadway, books, and movies. These days, he’s working on the sketch show “This Just In,” which appears similar to “Saturday Night Live,” the four-decade running live comedy show that Crystal was a cast member of and hosted several times. When we first meet Charlie, we can immediately spot something is a little off. He says out loud what direction he needs to turn when he approaches a stop sign. He forgets about his son’s Rex (Penn Badgley) job proposal mere minutes after he learns about it and even forgets which locker he’s using at a tennis club. Maybe it’s all part of a comedic bit, audiences might think, but soon we learn he has some form of dementia, and it seems to be getting worse. There’s also something clearly haunting Charlie – a very clear flashback filled with flashing red and blue lights and a police officer asking him his name follows him throughout the film.

But dark days aren’t entirely in the cards for Charlie. One day, he meets Emma, a quirky and full-of-life singer whose ex-boyfriend bet a mere $22 to go to lunch with the comedic writer. Though she has no idea who he is nor knows any of his work, she goes to the lunch just to get back at her ex for cheating on her. Immediately a pleasant relationship emerges between the two, despite the allergic reaction incident, and they later become inseparable, despite seeming like they might not have anything in common. As Charlie’s memory gets worse and he becomes more vulnerable, his relationship with Emma becomes increasingly important. Still, not everyone in his life is entirely on board with it, especially his daughter, Francine (Laura Benanti).

A lot is going on in this film, which may be why the story falters as it goes on. We see Charlie and Emma bond and go on adventures, such as a trip to the Madame Tussauds Wax Museum. This newfound friendship clearly bothers Francine when he invites Emma to his granddaughter’s bat mitzvah. There seems to be quite a bit of tension between the father and daughter, though it’s not addressed until much later in the film. Charlie also is dealing with his worsening dementia as we see him forget more names or become overwhelmed. However, memories of his wife, Carrie (Louisa Krause), come back as clear as day, as does the flashing lights flashback, but you’re left wondering why for a good majority of the runtime. To top it all off, we see many “behind the scenes” moments at “This Just In,” such as looks into the writers’ room and live tapings.

By the time you finish the film, you feel almost exhausted trying to keep track of everything that took place in nearly two hours. It also makes it hard to distinguish what is the core of the film. A budding friendship comedy with a touch of family/medical drama with workplace shenanigans sprinkled in? It’s all just a bit too much.

Tonal shifts also aren’t very smooth. One moment Charlie is having a pleasant time, and the next, he is facing a dilemma of some sort, and the tone entirely changes as if this film is a heavy drama. A scene later, it’s back to the happy and pleasant mood. The drama is utterly overdone toward the end of the film when Charlie is with his granddaughter. The sequence sticks out like a sore thumb for a film with primarily light moments and silly conversations and leaves you entirely puzzled.

An enjoyable quality of this film is the pairing of Crystal and Haddish. The two are comedic forces in their own ways, and it was a joy to see them together. At times, the acting felt a little rigid, and line deliveries weren’t always the best, but as their characters spent more time together, the performances seemed more natural. Other actors give fine performances, but some characters don’t necessarily add much to the story, nor do we really learn much about them aside from a factoid or two. Additionally, any time Emma had the chance to break out into a song and dance number, the movie livened up. Savor each of those moments since there aren’t too many of them.

“Here Today” has some hits, such as its lead castings, but many other elements bring it down. It’s not a total disaster – there are going to be some people who enjoy this busy story with its many tonal shifts – but a bit of editing in the writers’ room could have helped it become even stronger. If Charlie could edit other writers’ skits for “This Just In,” Crystal could have done it for his own story.