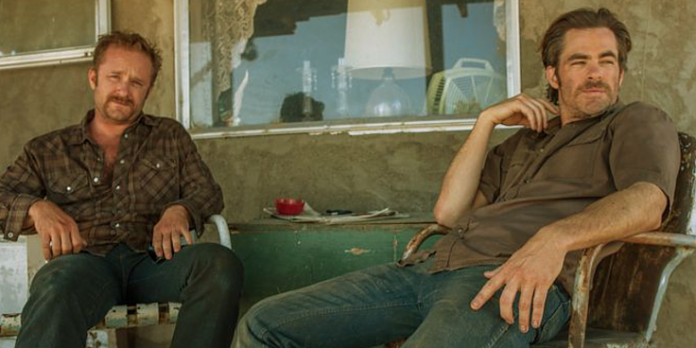 THE STORY – Toby is a divorced father who’s trying to make a better life for his son. His brother Tanner is an ex-convict with a short temper and a loose trigger finger. Together, they plan a series of heists against the bank that’s about to foreclose on their family ranch. Standing in their way is Marcus, a Texas Ranger who’s only weeks away from retirement. As the siblings plot their final robbery, they must also prepare for a showdown with a crafty lawman who’s not ready to ride off into the sunset.

​Since the economic crisis of 2009, many films have come out which have either directly or indirectly referenced the event that changed the landscape of America and its people. “Hell Of High Water” from “Sicario” writer Taylor Sheridan is one of the most timely, reflective and pitch perfect screenplays to explore a slice of American civilization (In this case, West Texas) in the aftermath of the economic crisis. It explores the decisions, actions, and consequences of men who want nothing more than to provide for their loved ones in the face of such economic hardship. It’s a solidly crafted film with a pitch-perfect screenplay and anchored by a trio of performances which help to propel it as one of the best films of the year.
​
​A divorced father named Toby (Chris Pine) is set on making a better life for his son despite the economic hardships that plague him and his community in West Texas. He elicits the help of his ex-convict brother Tanner (Ben Foster) to get him enough money to pay back the bank which is about to foreclose their now deceased mother’s house and land. The method in which they plan to get this money? Rob the bank that has been robbing them for all of these years. Hot on their heels is a Tex Ranger named Marcus (Jeff Bridges) who may only a few weeks away from retirement but will not rest until he stops the two men from committing any more bank heists. As Marcus closes on their trail and the heists become more dangerous, either a peaceful resolution for all or a showdown between both sides looms in the distance.

What is most striking about “Hell Or High Water” is the manner in which writer Taylor Sheridan makes it abundantly clear what kind of setting this story is taking place in. It’s clear in the look of the town laced with graffiti and older, less shiny, materialistic items. It’s clear in the motivations of the secondary characters who are driven by financial gain and the will to survive in a community that is stricken with poverty. It’s clear in the meditative dialogue that Jeff Bridges communicates to his half Mexican, half Indian partner Alberto (Gil Birmingham) on the status of the land they inhabit and how it has transferred ownership throughout the years. It’s a tight, clear and well-constructed screenplay with little to zero fat on it as it tackles different genres (Part family drama, part economic crisis film, part Western with splashes of dark humor) and builds to a crescendo of violence and decisions which never betray the characters.

Performances from the three leads are all bringing something unique to the table. Chris Pine is subtle, worried, yet extremely dangerous when pushed to extreme lengths for the sake of his family. Look no further than a moment where his brother is threatened by a young punk with a gun and the quiet, shaken younger brother steps up to the plate to fight for his brother with shocking aggression. As for the older brother, Ben Foster continues to prove how dynamic and exciting an actor he can be in “Hell Or High Water” with the flashier part of the two. He is a hot-head with a loose cannon attitude and yet will sacrifice anything for his little brother. However, Jeff Bridges is the one who steals the show as the world-weary, yet not ready to accept retirement Texas Ranger who is driven by his moral code to bring the two brothers to justice. This all comes to a head in the film’s final act as all three sides come together for an intense shootout in the desert with bloody results and a quiet denouncement that is suspenseful and poignant in its execution by director Ben Mackenzie.

Tough guy dramas involving loyalty, violence, and moral codes will always a soft spot in my heart which led me to wonder if I was being a little biased towards “Hell Or High Water.” But then I reflected on the careful characterization of the screenplay’s characters, its exploration of a relevant theme and the focus on atmosphere and character by director Ben Mackenzie over more superfluous artistic flourishes. Sprinkle a trio of fantastic performances on top and “Hell Or High Water” deserves its rating as I struggle to find a single terrible thing to say about it.