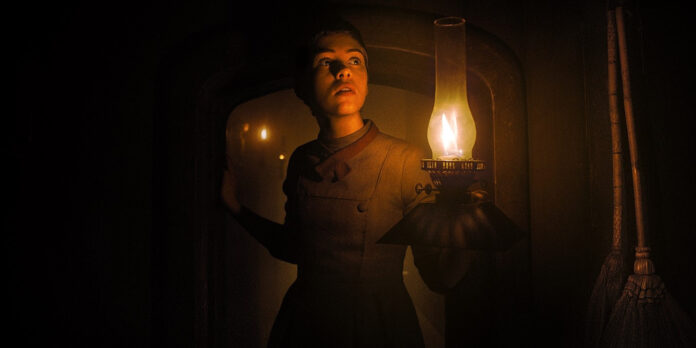 THE STORY – When their mother descends into madness, siblings Gretel and Hansel must fend for themselves in the dark and unforgiving woods. Hungry and scared, they fortuitously stumble upon a bounty of food left outside an isolated home. Invited inside by the seemingly friendly owner, the children soon suspect that her generous but mysterious behavior is part of a sinister plan to do them harm.
​
THE CAST – Sophia Lillis, Sam Leakey, Charles Babalola, Jessica De Gouw & Alice Krige​

​​​​​We all know the story of Hansel and Gretel, right? The little boy and girl who wandered into the woods leaving a trail of bread crumbs so they could find their way back, only to lose their way and end up at the candy house of a witch who puts them to work and fattens them up so that she can cook and eat them? But what if – hear me out now, please – we were to switch the order of the names in the title, so that the girl was the main character? And what if we made her a teenager looking after her kid brother after their mentally ill mother threw them out? And what if we turned the witch into a mother figure teaching Gretel about the womanly powers within her? How very now, right? Especially when we cast – get this – Sophia Lillis from “It” as Gretel!

What’s that, you say? What kind of film is it? Well, it’s a fairy tale, of course! But totally dark and edgy – I mean, it’s about a witch who eats children, so it’s also a horror film kind of like “The Witch.” It’s going to be very authentic – lots of natural lighting and dirty fingernails and period dialogue. You’ve seen “The Witch,” right? Man, that was a great film. Oh? You didn’t like it? Well…I mean…yeah, I guess the dialogue was kind of hard to understand. I’m not married to that part of it so much. Sophia can’t do an accent anyway, so she’ll just be talking like an American and everyone else is going to be somewhere on the British accent scale. It takes place in an undefined “old country” so the accent isn’t important anyway. We were also thinking of making the witch’s hut a big triangle, like a witch’s hat, you know? So there’s no real need to make everything feel like it’s “period.” What time period is it set in? It’s just a long time ago in a place far, far away. The important thing is that it looks cool. Everything will be totally unique to this film, you won’t be able to mistake it for anything else. Except for the digital cinematography, of course, that’s not going away any time soon, and I know we don’t have the budget to shoot on film. Besides, this is going straight to streaming any- OH! Orion Pictures wants to put this in theaters? Well, that’s exciting! The designers are going to be so happy to hear that.

The great thing about this film is that it also functions as a metaphor on so many levels. Gretel is a teenager, right? So she gets solicited by this old guy for sex, gets her first period, and how does she feel about those things? It’s totally relatable, am I right, ladies? You know all girls love fairy tales! And the witch is going to teach her about what it means to be a woman, so we can really hammer home the coming-of-age stuff. Well, I mean, she’s also kind of training her to be a witch, because Gretel has magic inside of her, she just doesn’t know how to use it. Huh? Why would the witch teach her that? Passing on knowledge, feminism, and she sees a bit of herself in Gretel, or maybe a dead daughter, or maybe both…I don’t know, we’ll let Glenn decide when she gets on set.

Wait, what? What do you mean we can’t afford Glenn? Huh. Damn. Sophia’s going to be really disappointed about that. Well, who can we get? What about Anjelica? She’s played a witch before. Still too expensive? Damn. Well, we need someone who understands the concept; someone who can be authentically scary but also have fun with it; someone who can go over the top if we want. I know! What about the lady who played the Borg Queen? She was the crazy religious lady in that video game movie. Alice Krige! She’ll be great. Oh, I mean, of course, we won’t have her go too far over the top. Yeah, American audiences don’t really do camp unless it’s drag queens. Don’t worry, we’ll take all that out. It’ll be totally serious from beginning to end. Well, not too serious. We have to keep those twenty-somethings interested.

Look, we can’t tell you how excited we are to be making this picture. We’re really proud of this script, and the concept designs are just fantastic. It’s going to be a mysterious and magical, fantasy-horror; strikingly beautiful and meaningful to today. We think this is a really important story and it’s going to bring back the fairy tale epic. We’re so happy that – what? You need it to be under ninety minutes. Oh…Okay…Well, I’m sure we can get it there. We’ll just make it a mood piece! Yeah! Who needs gradual character development? We’ll just have it all happen at once, right at the climax! And we’ll minimize all the side plots to whispers and ghostly visions – keep it really mysterious until the ending. Sophia will make it emotional; she has a great face for the camera. And we’ll sand down all of the witch’s motivations and lessons to the bare minimum, we only need enough to move the plot along. This is going to work out great! Audiences will turn out in droves for – what? A January release? But you haven’t even..yeah, I guess that’s fair. But hey! You won’t see a better-looking low-budget January release this year (I promise!).