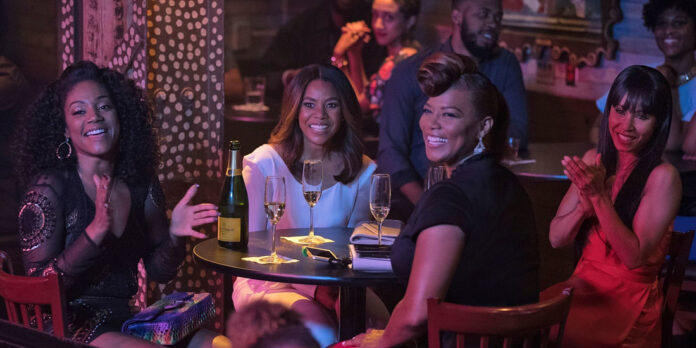 THE STORYBest friends Ryan, Sasha, Lisa and Dina are in for the adventure of a lifetime when they travel to New Orleans for the annual Essence Festival. Along the way, they rekindle their sisterhood and rediscover their wild side by doing enough dancing, drinking, brawling and romancing to make the Big Easy blush.

​​”Girls Trip” is a celebration of womanhood with a heartwarming story about the power of friendship. It manages to beautifully illustrate the excellence of authentic female friendship and simultaneously establishes itself as one of the funniest movies of 2017 thanks to its terrific ensemble and hilarious writing.

“Girls Trip” is the story of four college friends reconnecting for a weekend in New Orleans to attend the Essence Music Fest. Ryan (Regina Hall) is an “Oprah”-like public figure that brings the self-proclaimed “Flossy Posse” together as she simultaneously is facing a crisis of self. Joining Regina Hall on the trip is Jada Pinkett Smith, Queen Latifah and an amazing break-out star-making performance from Tiffany Haddish.

“Girls Trip” has the wonderful advantage of being underestimated by many, myself included. We had two reasonably plot adjacent films this summer in “Girls Trip” and “Rough Night.” In a head to head prediction, I personally would have put my money on “Rough Night” being the funnier and more memorable of the two based on the marketing (It featured Scarlet Johanssen, Kate McKinnon, and others with material written by the writers of “Broad City”) and I would have been very wrong.  We all know that surprises always play well for the longevity of a film as it relates to awards talk. The biggest surprise is the breakout performance of Tiffany Haddish who has managed to get a few critics citations for her role here. Much like Melissa McCarthy in “Bridesmaids,” Tiffany brings vibrancy and life to every scene she is a part of, thus elevating the role to not only be the film’s standout but also one of the most memorable performances of the year. It only takes a couple of scenes to leave you wanting more from her and the filmmakers manage to balance her star power perfectly with the talents of the rest of the cast. There is also a really charming story in “Girl’s Trip.” It does not shy away from some tough realities pertaining to a having a mid-life crisis and the cast manages to bring pathos in some key powerful scenes. It may be a comedy, first and foremost but “Girl’s Trip” has enough extra heft to make naysayers give it a second look past the grapefruit and other vulgar jokes. Lastly, the most pleasant surprise of all is the movie builds to a wonderful climax, culminating in a near-perfect endnote that leaves you walking out of the theater with a smile on your face.

There are some ridiculous moments within “Girl’s Trip” to be sure. Not every joke lands perfectly and although the narrative is surprisingly nuanced there are clichés sprinkled throughout. Jada Pinkett Smith’s character, as an example, is a walking caricature of the “friend who needs to relax” and it does not always work. There is an unearned bar fight and a moment of public urination that defies the laws of physics. You could evaluate the film scene by scene and easily come up with some misses and moments of silliness, but ultimately it is overshadowed by the moments when the humor does hit, the effective storytelling and the performances by the ensemble cast of hilariously talented women.

What we are left with is a crowd-pleasing, entertaining film that also features a fresh performance that is truly unforgettable. It is so transcendent that the Hollywood Foreign Press and the critic’s groups are recognizing it’s power this awards season. As we look towards Oscar Nominations next month, Tiffany Haddish remains in the conversation as a potential Best Supporting Actress nominee. An incredible accomplishment considering the vehicle that delivers her performance rarely makes its way into these conversations.

Powered by JustWatch
Share
Facebook
Twitter
Copy URL
Previous articleThe Next Best Picture Podcast – “All The Money In The World”
Next articleTuesday New Releases: “American Made,” “Battle Of The Sexes” & “The Breakfast Club”