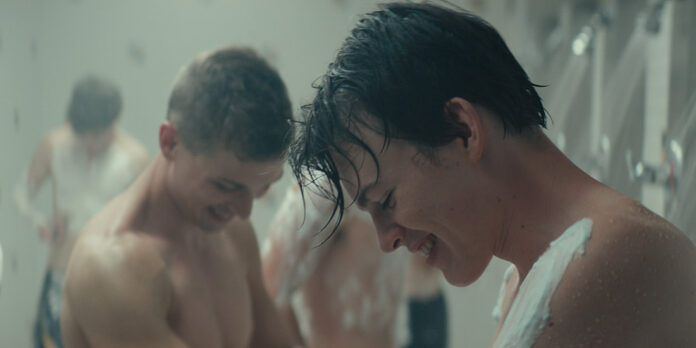 THE STORY – Franky Winter and Ballas Kohl have been best friends since childhood. They are high school royalty: handsome, stars of the swim team, and popular with girls. They live a perfect teenage life – until the night of Franky’s epic 17th birthday party when Franky and Ballas are involved in an unexpected incident that changes their lives forever.
​
THE CAST – Josh Wiggins, Darren Mann, Taylor Hickson, Kyle MacLachlan & Maria Bello

​There is no short supply of films that put a spotlight on teenagers going through the difficult adjustment of entering their adulthood. Many of them are able to talk about these subjects in a unique way where others fall victim to tired tropes and weak storytelling. Part of that coming of age narrative also focuses on the burgeoning sexuality of the characters, which is obvious to see because it too is a cornerstone moment for adolescents. It can be very tricky to successfully pull off an endearing film that isn’t trapped by the conventions. That makes this film particularly special in the way it conveys such a story, and find such an authentic way to approach the material.

It is a seemingly idyllic time for Franky (Josh Wiggins) and Ballas (Darren Mann), two popular high schoolers who are also the best of friends. They’re both on the swim team, are invested in the relationships with their girlfriends and have an encouraging home life. All of this seeming perfection becomes intensely complicated when, after a night of heavy partying following Franky’s birthday, the boys engage in a sexual encounter that tests the bonds of their friendship. The event affects their entire sphere of influence, and the fight to wrestle with these anxieties becomes amplified.

Truthfully, the film does have a very rocky start. The characters aren’t given a great focus and little momentum for the plot seems felt. One can understand how writer-director Keith Behrman wants to provide a tonal setup to this story, but the table setting lacks a lot of energy. However, after the inciting incident, the mechanics suddenly click into place, and what follows is an interesting exploration into the complex lives of people in transition, and how difficult it is to understand these situations and process these feelings with others. Behrman does a masterful job at portraying this world without being cloy or superficial.

What helps in this regard is that Behrman’s script does not give us the obligatory scenes we are most accustomed to watching in these types of films. The usual confrontations between the parents and children, the lead-up to certain events and the tired backstories exposited in long stretches are mostly jettisoned, and in their place are tender character moments that emphasize more of where the characters are in the moment. In that moment is the usual fears and anxieties, but coupled with an inherently queer perspective of the modern era. The film never provides easy answers to difficult situations, instead focusing on how messy life can be and the circumstances in which one can try their best to sort through it.

The whole cast also does fine work with the solid material they are given. Wiggins manages to find a great strength in the way he grounds the central character, and he captures all the emotional beats quite well. It is an endearing turn that gives an authentic representation of a young man trying to make sense of the world falling apart around him. Mann is not quite as strong, if only because his character does go through a more pedestrian arc and is relegated more toward the background than Wiggins. Still, he does a fine job himself and does well at portraying his own character’s troubled nature in coming to certain realizations about his life.

The supporting cast that surrounds them is also quite endearing. Franky’s parents, played by Maria Bello and Kyle MacLachlan, have divorced after his father left the family for another man, and both of them add a great deal of warmth. Bello charms her way through the film with a stern yet inviting persona, and MacLachlan offers another entry into the understanding parent of a queer child that manages to add his own sense of poignancy. Another notable member of the cast is Taylor Hickson as Ballas’s damaged sister who finds comradery with Franky. As a character, she is dealing with her own set of emotional turmoil, and Hickson finds the layers of that pain quite well. A special shoutout also to Niamh Wilson, playing another Franky friend who may possibly be transgender, who also provides some of the film’s best comedic moments.

The film does take a good while to really get going. The first half hour does tend to drag on for some time, and watching it might have many wondering what is ultimately so special about this story. However, there is a point where a switch is triggered, and suddenly a beautiful story about coming out in this modern age starts to unfold. The script is filled with smart observations and endearing character work, and it’s supported by strong direction and a very able ensemble. No doubt we will continue to get many more coming of age stories in the future. One can only hope that many more will continue to be just as enlightening as this one.