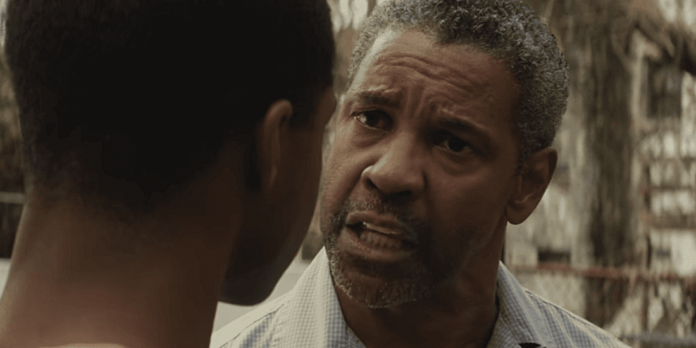 THE STORY – Now working as a garbage collector in 1950s Pittsburgh, a former baseball star (Denzel Washington) creates tension in his family when he squashes his son’s (Jovan Adepo) dream of playing college football.

In “Fences,” Denzel Washington steps behind the camera and directs not only himself, but an incredible cast of actors to some provocative and truly outstanding work. They are all aided by the late playwright, August Wilson’s Pulitzer Prize winning words, that leap off the page with intensity and humanity. It represents Washington’s best effort behind the camera and quite possibly, in a career of various terrific performances, his best effort in front of the camera.

Taking place in the 1950’s after World War II in Pittsburgh, “Fences” follows ex-baseball player and now garbage man worker Troy Maxson (Denzel Washington), as he is coming to grips with the current status of his life after 18 years of marriage to his wife Rose (Viola Davis). Troy’s son Cory (Jovan Adepo) has dreams of becoming a football player and following in the footsteps of his father, much to the disapproval of Troy. This, coupled along with having to take care of his mentally challenged brother Gabriel (Mykelti Williamson) and a new development in his relationship with his wife that threatens to change all of their lives has Troy contemplating everything that his life has led up to in his fifty plus years of living.

“Fences” is carried on the backs of Denzel Washington, Viola Davis and August Wilson’s screenplay, based off of his own play and feels like it plays out almost word for word though as if what we are watching is a filmed version of a live performance of the play. For the record, I’ve never seen the play, nor was I entirely familiar with the story of Troy and his wife Rose and the life that the two have shared, leading us up to the point in the story where the film begins. Denzel Washington has never been better than he is in “Fences”, giving us a character that is despicable, complex, unpredictable and a powerhouse. There are times where you feel like he has been the only character talking for an hour straight and its a credit to the immense talents of Washington that we never grow tired of it. Although his character is deplorable and can even be seen as a villain by some, Washington gives him enough layers and depth that no matter how low our opinions of the character may sink, we never lose sight of where he is coming from. The same goes for Viola Davis and her character Rose. In fact, it’s how her character reacts to Troy and his volatile outbursts that give the film its best scenes. There is so much internalized pain and anger inside her that when she does explode, Davis lights up the screen with a performance that will leave the audience silent and shaken. The rest of the supporting cast from Stephen Henderson, to Mykelti Williamson and Jovan Adepo all do fantastic work as well making this one of the best ensembles of the year.

The faults with “Fences” lie in the source material, in the sense that we as a filmgoing audience never lose sight that what we are seeing is very much based off of a play. Scenes go on longer than they necessarily have to and they are mostly confined to the household where Troy and Rose have been creating a life for themselves over the past 18 years. This makes for a very un-cinematic film and although the acting and writing are absolutely phenomenal, there is nothing here that we as an audience could not see on stage.

So while “Fences” is aided by its amazing performances and its thought provoking themes, it nearly comes undone by its bland filmmaking and unlikeable protagonist (Antagonist?). Troy constantly makes references to baseball throughout the movie and if I was going to attempt a lame excuse at doing the same thing here, I would not say that this is a home run, nor is it a strike out. “Fences” is more akin to a triple that you believe could turn into an in the park home run, but the runner halts at third before rounding the bases to get to home. It’s an awesome result, but not what is ultimately needed to make a difference in the score and potentially win the game.