“FANTASTIC BEASTS & WHERE TO FIND THEM” 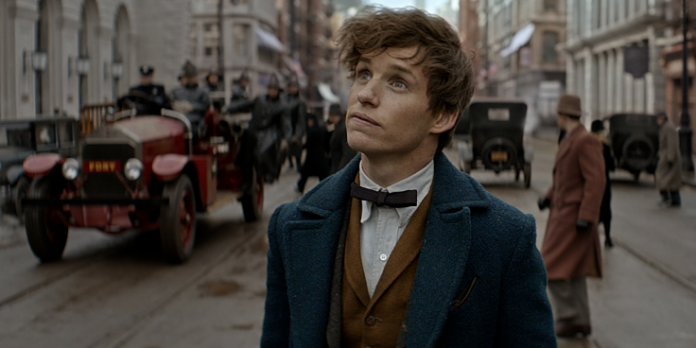 THE STORY – The year is 1926, and Newt Scamander (Eddie Redmayne) has just completed a global excursion to find and document an extraordinary array of magical creatures. Arriving in New York for a brief stopover, he might have come and gone without incident, were it not for a No-Maj (American for Muggle) named Jacob, a misplaced magical case, and the escape of some of Newt’s fantastic beasts, which could spell trouble for both the wizarding and No-Maj worlds.
​
THE CAST – Eddie Redmayne, Katherine Waterston, Dan Fogler, Alison Sudol, Ezra Miller, Samantha Morton, Jon Voight, Carmen Ejogo & Colin Farrell
​
THE TEAM – David Yates (Director) & J.K. Rowling ( Writer)
​
THE RUNNING TIME – 133 Minutes

​Eight films were simply not enough. After winning the hearts of critics and audiences alike with the “Harry Potter” series, best-selling author J.K. Rowling is back in theaters with a prequel to her beloved book series, once again taking place in the fantasy wizarding world of Harry Potter. The difference this time being that “Fantastic Beasts & Where To Find Them” is a prequel that takes place in the 1920’s and with a change of setting, this time the series moves to America (New York to be exact). There is no mention of Harry Potter or Voldemort, although Albus Dumbledore and Hogwarts do get a name drop at some point. Regardless, this is meant to be the first in what is hopefully another rousing success for Warner Bros. But does it have the same charm and sense of wonder as the Harry Potter films had?

After traveling from England to America during the 1920’s, Newt Scamander (Eddie Redmayne) brings a special suitcase with him to New York that contains various and incredible creatures. His suitcase gets accidentally mixed up with an aspiring baker named Jacob (Dan Fogler) and some of the creatures get released prompting Newt and Jacob to find the beasts throughout the city. An employee for the Magical Congress Of The United States (MACUSA) named Porpentina (Katherine Waterston) attempts to arrest Newt for causing such a mess in the human world where wizards are not to be seen nor heard of. However, with the threat of a new dark wizard named Gellert Grindelwald on the rise with Percival (Colin Farrell) trying to track him down through a troubled young boy named Credence (Ezra Miller), the trio find themselves wrapped up in a plot of sorcery unlike anything else they’ve ever seen before.

This is the first of J.K. Rowling’s novels to be adapted for the screen by the author herself and she does an admirable job in presenting these new characters and fantastical circumstances to the viewer. There is no getting around the obvious fact which is that “Fantastic Beasts & Where To Find Them” lacks the same appeal as the “Harry Potter” films. Perhaps it is because we are dealing with adults who are already well-versed in the arts of magic versus a young batch of kids who are just as amazed by what they are seeing as we are. J.K. Rowling attempts to put a No-Maj (Or a muggle as it were, or if you’re not entirely familiar with the series, a person who cannot perform magic) in as the audience surrogate so that we can see the fantastical through his eyes. And I must say, despite a few touches of comic relief that felt a little too forced at times, I was won over by Dan Fogler’s performance by the end of the film and even a bit moved by it. Eddie Redmayne (Who I sometimes struggle with in terms of his acting choices) nails the role as Newt Scamander with a warmness and curiosity to him that pretty much has him coming off as an animal rights activist. How can you possibly not love this character? And finally, Katherine Waterston made a nice impression on me here as well as she has in her other high-profile roles in “Inherent Vice” and “Steve Jobs.” She is a rising talent to watch out for in the coming years in terms of Oscar potential. Colin Farrell is brooding and to tell you the truth, boring in the role of Percival and Ezra Miller is, to put it mildly….weird. Both Samantha Morton (Who plays Credence’s mother Mary Lou, the leader of the New Salem Philanthropic Society) and Jon Voigt (A Newspaper tycoon named Henry Shaw Sr.) are barely in the film enough to make much of an impression as the before mentioned actors do.

While I enjoyed the sequences of Newt, Jacob, Porpentina and her mind reading sister Queenie (Alison Sudol) going on adventures to recapture Newt’s escaped beasts from his briefcase, it’s Rowling’s handling of the rise of a new dark enemy known as Gellert Grindelwald that left me confused and unengaged with the story. Nearly all of the scenes with Colin Farrell, Samantha Morton, Ezra Miller and Carmen Ejogo (Who plays President of the MACUSA, Seraphina) are heavy on exposition and don’t set the stage nearly well enough to get us invested in future installments for the series. Plot lines are left unresolved but not in a fulfilling way that makes you yearn for the next film.

What will always keep me coming back to this series is the technical department’s work. The score by James Newton Howard is the film’s best asset as he does not attempt to rip off any of the other previous composer’s work on the Harry Potter series and instead goes for his own style here that is both classical and otherworldly. The costuming is already practically iconic through the use of Newt’s blue coat and other restorations of the period including the art direction. The special effects are sometimes a bit poor as evidenced by the computer-generated elves (One of whom is voiced by “Sons Of Anarchy” actor Ron Perlman) and Newt’s beasts. Other elements such as the Obscurial, which is featured prominently in the film’s third act, fare much better and also inspire some truly terrific sound mixing with every quick movement and force of destruction it creates.

So, “Fantastic Beasts & Where To Find Them” is not perfect. It’s enjoyable in some aspects and is a bit complex and unfulfilling in others. The main cast is charming enough while the rest of the cast is either underused or not developed well enough in this film and are stuck having to wait for the next installment to get their due. And that is where J.K. Rowling falls into the same trap that the Extended Marvel Cinematic Universe has been battling with this critic for quite some time now: Don’t focus so much on setting up the next film. First, worry about the characters and the story of your current film then save the connected ties for a sequel until the end. Otherwise, you risk losing the audience due to a lack of serious stakes and establishing an emotional connection with the current story you paid money to see unfold on the screen before you, not the story you are inevitably going to pay to see next time. Well, at least we have four films left to correct that mistake.