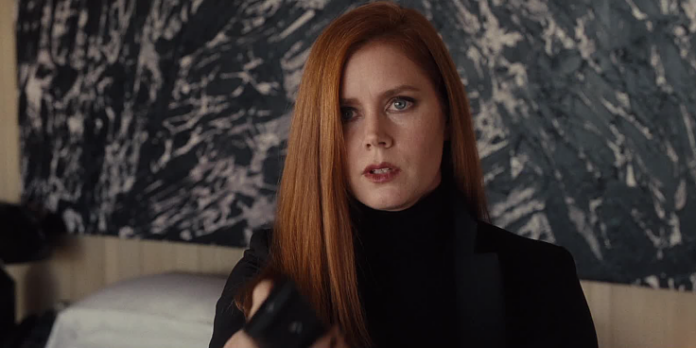 THE STORY – A successful Los Angeles art-gallery owner’s idyllic life is marred by the constant traveling of her handsome second husband. While he is away, she is shaken by the arrival of a manuscript written by her first husband, who she has not seen in years. The manuscript tells the story of a teacher who finds a trip with his family turning into a nightmare. As Susan reads the book, it forces her to examine her past and confront some dark truths.
​
THE CAST – Amy Adams, Jake Gyllenhaal, Michael Shannon, Aaron Taylor-Johnson, Isla Fisher, Armie Hammer, Laura Linney, Andrea Riseborough & Michael Sheen
​
THE TEAM – Tom Ford (Director/Writer)
​
THE RUNNING TIME – 116 Minutes

​Tom Ford is a fascinating individual who makes fascinating films. His previous film (Also his debut) was “A Single Man” which came out in 2009 to acclaim and landed Colin Firth an Oscar nomination for Best Actor. Seven years later, he returns with a completely different yet no less fascinating tale of revenge, deceit, and violence in his adaptation of the 1993 novel “Tony And Susan” called “Nocturnal Animals.” It’s a film of staggering beauty, brilliant performances and dark cathartic energy that will have you thinking long after the film is over about its themes and comments on relationships.

Susan (Amy Adams) is a successful art gallery owner living in Los Angeles who is unhappily married to her second husband, Hutton Morrow (Armie Hammer). Her ex-husband, Edward Sheffield (Jake Gyllenhaal) was everything that Hutton is not when they were together. Edward was not financially successful, he was not particularly driven and he did not provide the security and comfort which Susan felt like she needed in her life. As a result, Susan left him in a hurtful way and has since moved on with her life until she unexpectedly receives a manuscript for Edward’s novel called “Nocturnal Animals” which he has dedicated to Susan. Susan begins to read the dark and twisted novel about a family man named Tony Hastings (Also played by Gyllenhaal) who’s family is torn apart by a group of troublemakers one night along a deserted highway in West Texas. Tony is aided in the aftermath of the events that evening by a hard and determined detective named Bobby Andes (Michael Shannon) who is devoted to helping Tony seek revenge for the wrongs that have befallen him and his family. As she gets deeper into the novel, Susan begins to understand a connection between the story playing out in the book versus events which occurred in her own life with Edward.

Right away from the unforgettable opening credits sequence, “Nocturnal Animals” lets you know that you’re in the hands of a master filmmaker. Tom Ford (A famous fashion designer turned filmmaker) brings such a visual flair to not only the images he presents on screen but also through the art direction and costumes that his films evoke a Kubrikan quality about them. Both of his two films often deserve a re-watch due to the many subtleties that can be found within the crafts departments. What does the color of this woman’s dress represent? Did I not see that exact same pose before? Why is that character being framed that way? These are questions which Tom Ford’s meticulous filmmaking asks us to ponder about and it helps to make his films so rewarding.

All of this would be for naught though if “Nocturnal Animals” lacked a human center and luckily, the story with which Ford presents has not one, not two, but three different timelines intersecting at various points in the film and each is just as captivating as the last. The scenes in Texas (Mostly in the desert) exemplify a masculinity that plays well into the film’s theme of self-doubt and confidence. Ford is able to craft what are almost three separate short stories that are all interconnected and each has such subtle thematic crossovers that the manner in which they play out only helps to fuel his brilliance as a writer and director. The editing is probably the biggest component for why the film works so well, constantly moving backward and forwards between Susan reading the novel in her lonely home to Tony’s struggle in Texas. Sheamus McGarvey’s cinematography is some of the darkest (Literally) I have seen in a film in quite some time. The score by Abel Korzeniowski has a haunting classical element to it that calls back to film’s of the past with its soaring beauty. And as mentioned before, the art direction and costumes are gorgeous.

And now we come to the performances. They are for lack of a better word: impeccable. Jake Gyllenhaal once again continues to astound with his range as an actor as he plays a weak, sensitive man with a big heart who is pushed to his absolute limit in both his fictional and real life story lines. Amy Adams leads the film with a complex performance of doubt and regret. Aaron Taylor-Johnson has the most straightforward role as a lowlife who is as despicable as they come and proves to be a difficult obstacle for the weak character of Tony to overcome despite the damage he has had to endure. Laura Linney shows up for one scene as Susan’s mother in a flashback but leaves a tremendous impression on the audience as much as her daughter. And finally, the film’s MVP is Michael Shannon who is hell-bent on helping Tony in the aftermath of his tragedy to see that justice is served. His performance may be a tad bit too campy at times (As are some other elements in the film) but the way Shannon carries himself is enough to intimidate even the most hardened of criminals.

“Nocturnal Animals” marks a great leap for writer/director Tom Ford is displaying not only his terrific visual instincts but also the quality of his writing in crafting a pulse pounding thriller that is as dark as anything you are to see at the cinema this year but also a very human story that nearly everyone will be able to relate to. His ability to get such varied performances out of his actors and present narrative cohesion through his twisted screenplay shows that we are dealing with a man who belongs right where he is. My only hope is that we don’t have to wait another seven years for his next effort.​