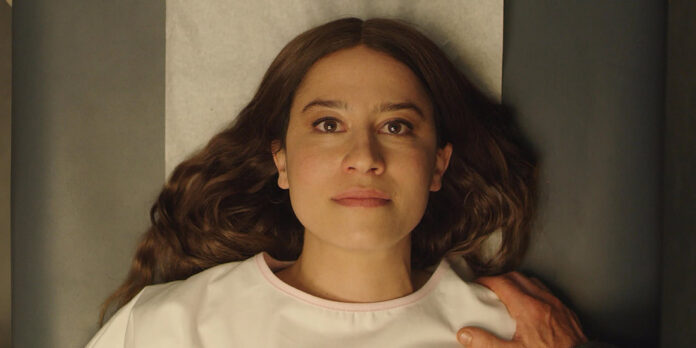 THE STORY – Lucy and Adrian find their dream fertility doctor in the illustrious Dr. Hindle. But after becoming pregnant, Lucy begins to notice something sinister behind Hindle’s charm, and she sets out to uncover the unsettling truth about him.

​Lucy (Ilana Glazer) and Adrian (Justin Theroux) seem to have a pretty great life – young, in love, and living in a fancy apartment. But despite trying for years, they’ve been unable to get pregnant. When Adrian gets them an appointment with his former professor Dr. Hindle (Pierce Brosnan), who is also one of the world’s best fertility doctors, things finally seem to be looking up. After getting the lead position on a new account at the marketing firm where she works, Lucy seriously begins to entertain the prospect that she might just “have it all.” But then Dr. Hindle tells her that she has three fetuses growing inside her – twin boys and a single girl – and that for the best chance of survival, she will have to undergo a “selective reduction.” Dr. Hindle says the boys have the better chance, and Adrian agrees, but Lucy wants the girl. After making her decision, Lucy begins having nightmarish visions and lapses in memory that her new prospective mommy group friend Corgan (Sophia Bush) attributes to “mommy brain.” Still, Lucy suspects that Adrian and Dr. Hindle have done something sinister to both her and her daughter.

Yes, “False Positive” is playing with well-established tropes – a little bit of “Gaslight” here, a piece of “Rosemary’s Baby” there. Things start positively, with an overwrought horror score over a mysterious opening credits sequence that features dark rooms, billowing white curtains, and a blood-stained Lucy walking in the middle of the street. These flashes of bloody baroque horror grow more frequent as the film goes on, and they are always effective at making the viewer feel ill at ease. Glazer’s screenplay (co-written with director John Lee) is even more effective at this, subtly underlining all the ways in which the world minimizes expectant mothers. From the patronizing ways, her male co-workers insist that she has been “glowing” in the days before she announced her pregnancy to Adrian’s constant references to how “we” got pregnant. To the way, Dr. Hindle scolds her for looking up what her various health issues could mean for her pregnancy, not to mention the infantilizing “mommy brain” refrain. All of this is never played entirely for comedy but is instead used to underscore how women are pushed not to believe or listen to their bodies when pregnant. It is a generations-old issue, and one Glazer clearly feels deeply, pouring her own fears and anxieties into a solid dramatic performance.

The cast around her is also doing strong work. Bush is quickly ingratiating as the kindly Corgan, Theroux is loving but just reserved enough to make you wonder what he’s hiding, Gretchen Mol is creepy as Hindle’s too-perfect perky head nurse, and Zainab Jah nails the ersatz Earth Mother cadences of a “spiritual” midwife who wants to bring women back to their bodies. However, the easy stand-out is Brosnan, who is clearly having a blast as the imperiously warm Dr. Hindle. The way he uses his velvet growl of a voice to subdue Lucy and make her feel safe is masterful – he has the look and sound of a lion circling its prey.

Glazer herself is incredibly sympathetic as Lucy. The way her hopeful face slowly curdles into a rage as Lucy realizes something is wrong is magnificent. Unfortunately, the film makes some swerves in its second half, making it more difficult to sympathize with her, just when we should be feeling for her more. A couple of dream sequences come out of nowhere and make it increasingly difficult for the audience to discern what is real and what is in Lucy’s head. That’s part of the fun of this type of film, of course, but when the plot lurches into overdrive in the last act, it moves so fast that everything feels fake. Given how deliberately Lee and editor Jon Philpot have paced the film up to that point, this is almost surely intentional, but it sacrifices Lucy’s character for the sake of the film’s increasingly bizarre plot. While this does lead to some memorable imagery, it sadly does to Lucy just what she’s afraid the world is doing to her: It undercuts her credibility and takes away some of her agency. The wild ride that “False Positive” takes the audience on is still fun for most of the film, but the ways it lets down its lead character at the end will leave you a bit queasy.