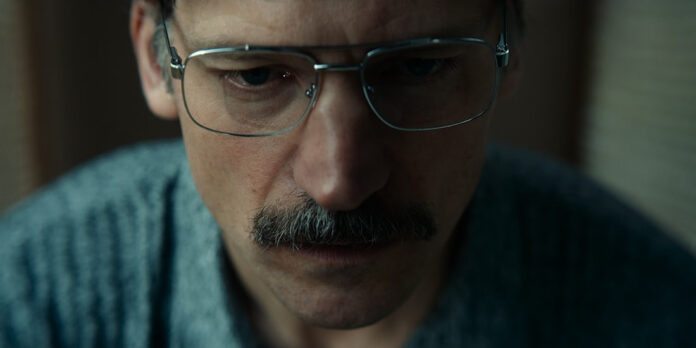 THE STORY – Max is an insurance agent who’s in the midst of an existential crisis. While solving a difficult case of a married man’s disappearance, he uncovers the secret Hotel Aurora, which he seeks out to find. The hotel is an exclusive, remote, luxury resort that specializes in suicide. His investigation soon reveals a disturbing truth that causes Max to question life, death and his own understanding of reality.

Originally titled “The Suicide Tourist,” and later re-named “Exit Plan” for its U.S. release, the latest film from director Jonas Alexander Arnby and writer Rasmus Birch (“When Animals Dream”) was always going to offend audiences no matter what it was called, once they saw the movie that is. For a film dealing with such a sensitive issue as assisted suicide, this latest effort (which is going directly to VOD and streaming here in the states) is the kind of dull downer that relies too much on atmosphere to sell itself instead of the basics of fundamental storytelling.

Max (Nikolaj Coster-Waldau) is an insurance claims investigator with a beautiful and loving wife named Laerte (Tuva Novotny). However, he is suffering from a brain tumor that will surely kill him. He travels to a remote hotel called The Aurora, where several of his cases have traveled to before in hopes of utilizing the hotel’s secretive services for assisted suicide. While there, he makes certain discoveries that will alter the course of his life as he nears his inevitable end.

Coming off of “Game of Thrones”, we all know Nikolaj Coster-Waldau can carry a film on his own with his acting ability, good looks, and charming personality. Here, he is a man slowly suffering physically but more importantly, psychologically and spiritually. The film starts with his videotaped confession telling us that he will die and Coster-Waldau carries that sense of dread and melancholy on his face and in his body language every step of the way. If it wasn’t for his magnetic screen presence, “Exit Plan” would’ve been damn near impossible to sit through.

Working within the gothic horror and the psychological thriller genre to deliver a paranoid existential journey, “Exit Plan” starts off slow but never builds enough momentum to captivate its audience and provide a significant payoff to its premise and ideas. It’s a real shame considering assisted suicide is a deeply fascinating and in some cases, emotionally painful theme to center your story around. Very few stories have been able to justify themselves working with such a heavy theme. And while “Exit Plan” has some striking production design (the Aurora Hotel simply looks gorgeous) and beautiful cinematography with deep shadows contrasted against soft lighting, it cannot make up for the empty hollowness within the film’s screenplay.

Slowly paced, lacking in drive and saddled with an ambiguous ending that will leave you wondering what was the purpose of everything that came before it, “Exit Plan” is not the horror-thriller its trailers would lead you to believe it is. Working with such a controversial topic as assisted suicide is no joke and if you’re going to tackle such delicate subject matter, you better bring your A-game. On the surface, “Exit Plan” may look and feel like a journey worth taking but once you check your watch 20 minutes in and realize that there are still 70 plus minutes to go, it too will have you begging for it all to end.