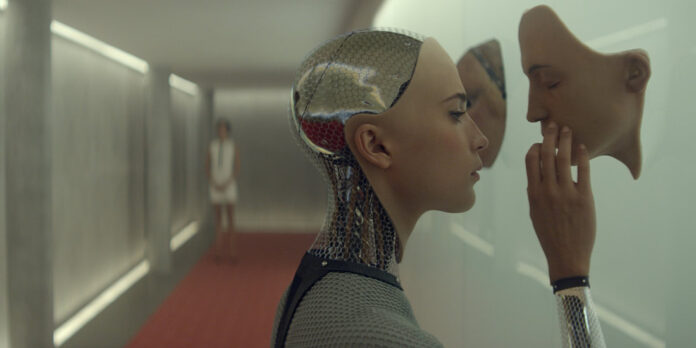 THE STORY – Caleb Smith (Domhnall Gleeson) a programmer at a huge Internet company, wins a contest that enables him to spend a week at the private estate of Nathan Bateman (Oscar Isaac), his firm’s brilliant CEO. When he arrives, Caleb learns that he has been chosen to be the human component in a Turing test to determine the capabilities and consciousness of Ava (Alicia Vikander), a beautiful robot. However, it soon becomes evident that Ava is far more self-aware and deceptive than either man imagined.
​
THE CAST – Domhnall Gleeson, Alicia Vikander & Oscar Isaac

Alex Garland’s “Ex Machina” is a mesmerizing science-fiction film that dances between both the logical and the spiritual. Offering up loads to chew on within the realm of science due to its story it also simultaneously offers up contemplative thoughts on the nature of Artificial intelligence and on the flipside, what it thinks of us. With stunning performances from the ensemble, specifically Alicia Vikander and a transcending visual style, “Ex Machina” is something rather spectacular within the genre of science-fiction. Previously known for his brilliant writing, Alex Garland makes an equally brilliant directorial debut with “Ex Machina.”

After winning a competition talented computer programmer, for the Google equivalent Bluebook, Caleb (Domhnall Gleeson) is selected to be flown out to the CEO’s estate in the middle of a vast mountain range. Bluebook CEO Nathan (Oscar Isaac), has successfully invented something that will change the world of science forever. He has successfully created a fully functional humanoid artificial intelligence. The humanoid AI is named Ava (Alicia Vikander). Ava has an entire conscious and decision-making process just like you and me. Caleb is flown to Nathan’s estate to take part in a rather important process for the creation of artificial intelligence: the Turing test. If Caleb can effectively prove that it feels like he is interacting with an actual human versus a computer then Nathan’s experiment will be a success. However, there is much more depth to this experiment than just interacting with an AI. There is an underbelly of lies and deceit from Nathan and even a developing love story between Ava and Caleb. The film swims back and forth between its perplexing science fiction questions and also a tender passion that is shared between Ava and Caleb.

At first, Caleb and Ava begin interacting how you would expect a relationship between a computer and a human to start but then it slowly begins to evolve into something much more romantic. The romance shared between Ava and Caleb is incredibly real and heartwarming despite the fact that she is not human. Yet, as the film goes on, we begin to witness something much more sinister brewing beneath Ava’s good looks and naive charm. Something that proves that if you give a computer a mind of its own, it can be just as insidious as human beings can.

Alex Garland’s visual approach to the film is something that is immensely pleasing to behold for the sci-fi genre. A shallow focus with a heavy punctuation on warm and cool lighting styles, the film puts an emphasis on using mainly shades of blue and orange. The other colors that show up more often than not are white and red. But what exactly does this mean?

Well, the white is meant to symbolize innocence as in the innocence that we see within Ava and how she acts and interacts with the people and the world around her. She is a recent inception so therefore she is somewhat like a child. Clearly, she is much more intelligent than a child but there is a youthful innocence about her and how she processes information. The red is meant to symbolize not only the passion between Caleb and Ava at first, but also act as a punctuation mark to the themes of deception within the film. The blue is meant to symbolize intelligence and wisdom that just about each and every character posses in the film. The orange obviously could be taken several different ways but I believe it is meant to be associated with fascination and determination. There is a fascination from how Caleb feels about Ava and then a determination to not only to prove that when the two are interacting it feels like two humans but also to discover a truth hidden beneath Nathan’s lies.

The performances in the film from the main trio are absolutely outstanding. Domhnall Gleeson is excellent in his awkward and timid approach to the character of Caleb. Oscar Isaac is hyperactive and explosive as the character of Nathan. The two interact in a way that feels unnatural from the beginning. Not in terms of their performances but in terms of the way in which their personalities collide. Both are asking each other this thought-provoking questions but the manner in which they are responding and behaving says a lot about who they are and what they value. This is all contrasted with the wants and desires of Ava.

And that is where the true MVP of the film comes in, Alicia Vikander as Ava. Vikander would this same year go on to win an Oscar for Best Supporting Actress in Tom Hooper’s film “The Danish Girl” but I would firmly argue that she deserved that for this film. She is the driving force behind everything we see on screen. From the way she perfectly exemplifies that innocence I mentioned earlier, to the moments of passion and curiosity with Caleb and even the darker moments that her character experiences, she is captivating each and every moment she is on screen.

“Ex Machina” is one of those ingenious science fiction films that we receive every few years. Smart and insightful into our views of the world and our views of humanity, it’s a truly astonishing directorial debut from Alex Garland. With stellar performances from the cast including a career-best (So far) from Alicia Vikander, there are few areas that “Ex Machina” lacks in. Though it does take a small bit of time for the film to gain some momentum and its ending may prove to be divisive, it is still easily one of the best films of the last decade.​