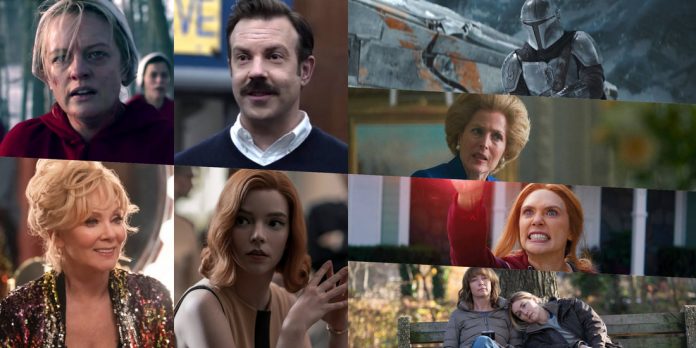 The 2021 Primetime Emmy nominations were announced yesterday morning, and one thing was made abundantly clear: the television academy hasn’t watched that much tv this year. However, all of the shows they did watch received so many nominations (4 shows received over 20 nominations) that it will inevitably lead to an exciting race between these heavy-hitters. Leading the pack with the most nominations was Netflix’s “The Crown” and Disney+’s “The Mandalorian,” with 24 each.

In the race for Outstanding Comedy Series, Apple TV+’s “Ted Lasso” lead with a commanding 20 nods, representing the most for a Comedy Series in its first season. Surprising most of us in second place was HBO’s “Hacks.” With 15 nominations, it may seem far behind but not really when you consider how many nominations it received in the same categories as “Ted Lasso.” The two shows are undoubtedly the heavy hitters in the Comedy Series category after today’s showing.

It shouldn’t come as a shock to anyone that in the Outstanding Drama race, “The Crown‘s” fourth season leads with a whopping 24 nominations. Despite this impressive haul, the Netflix show has not been coronated yet with a Series win. This is looking to be the show’s best shot yet. “The Mandalorian” overperformed in its second season, receiving a tying 24 nominations of its own. Not too far behind was the fourth season of Hulu’s “The Handmaid’s Tale,” with 21 nods for its strongest season since the Best Drama Series Emmy winning season one.

Expect the unexpected as far as the Outstanding Limited Series race is concerned. “The Queen’s Gambit” enters the race with 18 nominations trailing the technical wonder “WandaVision,” which has a whopping 23. Not to be counted out is “Mare of Easttown,” which is close behind with 16 nominations. This will be a fight to the death between these three massive shows, with “I May Destroy You” potentially factoring in as the spoiler.

Praise Be: Madeline Brewer, O-T Fagbenle, and Max Minghella all have had to sit and watch their “The Handmaid’s Tale” costars receive recognition—but the fourth time proved to be the charm for this trio.

I May Surprise You: One of the best surprises was how well “I May Destroy You” performed. It received Limited Series, Casting, and Supporting Actor (Paapa Essiedu) nominations, as well as the three mentioned above. It came on much stronger than expected, which only further proves it was one of the most widely viewed and well-received shows of the year.

Hello/Goodbye: “Lovecraft Country” received 18 nominations, including Outstanding Drama Series, which was highly bittersweet after HBO unjustly canceled the series. Maybe they should re-think that?

Strike A “Pose:” “Pose” has had a so-so Emmy run these past two years. But, for its final season, the series made a huge comeback in the race, as well as its first Drama Actress (MJ Rodriguez – in a history-making nomination as the first Transgender woman to be nominated in this category), writing and directing nominations.

Popularity Isn’t Always A Bad Thing: “The Boys,” “Cobra Kai,” and “Pen 15” each earned Series nominations proving that being very popular can be helpful when it comes to getting Emmy nominations. Is this a COVID-19 thing, or will they be able to keep the momentum going in future seasons?

Apathetic Nominations: For their final seasons, both Alison Janney (“Mom”) and William H. Macy (“Shameless”) earned nominations—at least this is it, and they won’t be back to take up slots from other deserving nominees.

Does The Television Academy Miss Traveling: How else can you explain “Emily in Paris‘s” surprise Comedy Series nomination? Seriously, how?!

Where Are The Patients?: “In Treatment’s” Uzo Aduba earned a Drama Lead Actress nomination, but her costars and season standouts John Benjamin Hickey and Anthony Ramos were both snubbed. Odd.

We Get It: “Hamilton” was a hit on Broadway, and the taped production with the original cast was allowed to compete in the Limited Series/TV Movie Acting races taking up seven acting spots. The most surprising was Anthony Ramos, who is the only Emmy nominee that did not receive or win a Tony Award (Sorry, Christopher Jackson).

May The Lord Open: With all of the first-time nominees from “The Handmaid’s Tale,” the exclusion of Amanda Brugel, who plays Rita, was even more glaring. Also, Joseph Fiennes sadly missed out on a nomination. He probably should’ve stayed in the supporting race for his final season of “The Handmaid’s Tale.”

Wrong Year: “The Undoing” was supposed to premiere last year initially, and after all but being shut out (no nominations for Nicole Kidman or Donald Sutherland), one has to wonder how they would’ve performed last year?

Where Are They?: “The Underground Railroad” received only seven nominations, and not one was for its talented cast. A travesty for one of the best pieces of art that 2021 has given us so far. Not to mention, Steve McQueen’s incredible anthology series of films “Small Axe” was entirely shut out except for a lone cinematography nomination.

What Happened To Mando?: “The Mandalorian” had a great day which has to make you feel bad for the series star Pedro Pascal who was once again snubbed. When you consider that the acting branch awarded the series with three nominations, this really hurts. Hey, even the specialists who created baby Grogu received nominations!

What did you think of the Emmy nominations? What were your favorite surprises and most heartbreaking snubs? Let us know in the comments section below or on our Twitter account.