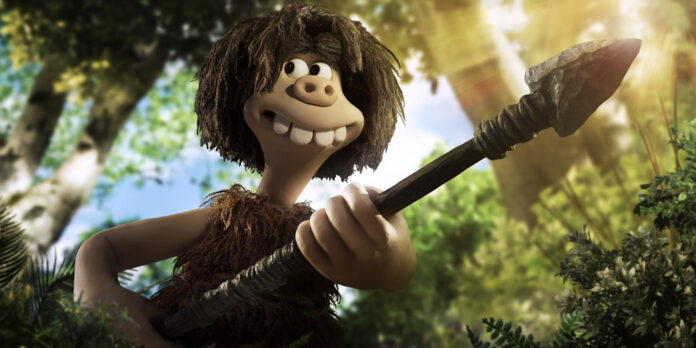 THE STORY – A plucky cave man named Dug, his sidekick Hognob and the rest of their tribe face a grave threat to their simple existence. Lord Nooth plans to take over their land and transform it into a giant mine, forcing Dug and his clan to dig for precious metals. Not ready to go down without a fight, Dug and Hognob must unite their people in an epic quest to defeat a mighty enemy — the Bronze Age.

​​For anyone who likes “Wallace & Gromit,” or any of the Aardman Pictures back catalog, then “Early Man” will be a welcome release that won’t disappoint. Unfortunately, this primitive piece of cinema (In every sense) does little more than advertise Nick Park’s trademark stop-motion aesthetic through a parade of humorous shots and family-friendly one-liners. The concept for “Early Man” could have been groundbreaking – a culturally relevant commentary on social and political progress and a community’s struggle to swim against the unstoppable tide of change. In the hands of Pixar, this is what could have been. In the end, we were given a bland child appropriate mash-up of “Bend It Like Beckham” and “Dodgeball,” about a stone age tribe betting the future of their valley on a soccer match against the stronger, more advanced bronze age.

Dug (Eddie Redmayne) is the naïve youngster yearning for his tribe to upgrade their hunt from rabbit to mammoths. His boundless optimism and breakable spirit are reminiscent of Hiccup (“How To Train Your Dragon”). However, his tribe faces bigger problems when their peaceful valley is invaded by bronze age foragers searching for minerals. Refusing to let his family be exiled to the ‘Badlands’, Dug embarks on an adventure to win back his home and with it, take his family into the first century.

On the one hand, “Early Man” still offered some socially poignant analogy, as the less developed group learn to use new tools and thrive in a new environment, but it doesn’t really carry much punch. The narrative feels stoic and unoriginal, while the visuals tirelessly repeated the same splat-in-the-face gag. There is a timeless charm to the plasticine stop-motion and, combined with some computer wizardry, which makes for an aesthetically pleasing experience, but one you would more expect to find on cable TV rather than the big screen. However, let’s not forget this is a film made for children, and by all accounts, this is a film that will be overwhelmingly embraced by children and, I imagine, by parents desperate to placate their offspring for a couple of hours. “Early Man” is a classic underdog narrative displaced into a semi-prehistoric backdrop, made palatable and enjoyable for younger viewers by a filmmaker who is clearly a child at heart.

The cast is often overlooked in animated movies, but all of the credit goes to the array of British talent lending their vocals, including Oscar-winning Eddie Redmayne in the lead role and Tom Hiddleston, who goes from playing a Scandinavian inspired God in “Thor” to a Scandinavian inspired, power-hungry, massage-loving ruler of the bronze age. Maisie Williams, Richard Ayoade and Timothy Spall complete this bizarre but inspired lineup. There’s even a cameo from Nick Park himself.

As harsh as the above sounds, “Early Man” is watchable, but it’s frustratingly anti-climactic. For a film that carried so much promise in concept, it didn’t seem to understand itself and instead went on an unnecessary underdog story for kids that failed to deliver on most fronts, but at the minimum at least kept younger viewers entertained. All of this aside, Nick Park will no doubt be looking for his fifth Oscar next year and, due to a decent previous track record compounded with a reasonable campaign, he could easily see himself nominated for Best Animated Feature both here and at the BAFTAs (If “The Boss Baby” can get a nomination, then anything is possible). It should not, nor could it possibly win any awards with a slate of promising fare from Disney and other major releases to look forward to. No doubt by year-end many of us will have only vague memories of that caveman film and misremember it for “The Croods” – which, for the record, should always take precedence on your DVD shelf. “Early Man” is a disappointing animated film which, in style and substance, feels at least ten years out of date.