Dr. Steamroller: Or How I Learned To Stop Worrying & Love The Oscars 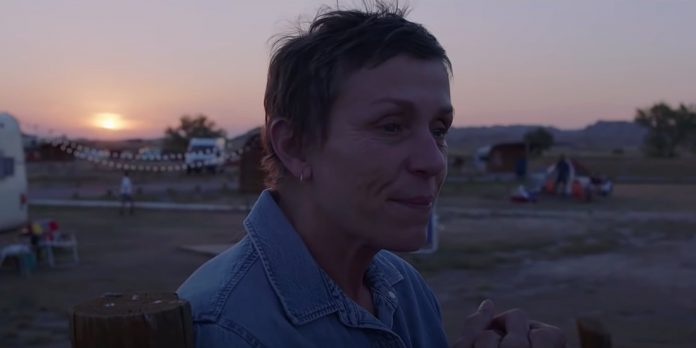 By Matt Neglia
​
“Nomadland” is unstoppable. In a previous article, I mentioned how the other Best Picture nominees could rally in the final hour to defeat the critically beloved awards juggernaut. However, after the BAFTAs were announced yesterday, it has still not come to pass. Even its most formidable challenger, “The Trial Of The Chicago 7,” was weakened after it failed to win a single BAFTA award this weekend, which is something that may occur again at the Oscars on the 25th.

“Nomadland” has so far won the Venice Film Festival’s Golden Lion Award, the Toronto International Film Festival’s People’s Choice Award, the Critics Choice Award, the Golden Globe, the PGA, the DGA, and now the BAFTA. We have not seen a film conquer awards season like this since “The Artist” back in 2011. There is not even a consensus on what the number two film is. “Nomadland” just continues to win and will most likely keep on winning until the end. Anyone who thinks otherwise needs to accept reality at this point. The reality is, people are tired. Yes, they may be tired of seeing the same winners this awards season but it goes much deeper than that. People are tired of the year that was 2020 as much as they’re tired of this year’s awards season. It was a season that was needlessly dragged out to accommodate other big studio films for Oscar consideration, which all got pushed back to 2021 anyway! We’re most likely heading towards the lowest voter participation at the Oscars in recent memory (maybe even ever) and the lowest-rated show ever amongst audiences. It’s easy to see how many of the Oscar races, even outside of Best Picture, have all fallen in line with a consensus favorite, leaving very little room for a surprise upset.

“The Trial Of The Chicago 7” needed the WGA award (which it lost to “Promising Young Woman“) and at least somewhat of a presence at BAFTA, coupled along with its SAG win to suggest that it could win Best Film Editing, Best Original Screenplay, and Best Picture. Now, unless it wins the ACE Eddie, it looks very likely that it will be getting zero Oscars. According to Sports Betting Dime, the odds have increased for every film in the Best Picture category, apart from “Nomadland.” Chloe Zhao’s film’s average odds have shortened from -353 to -475. However, I can say with confidence that “Nomadland” WILL win Best Picture and Best Director. I can also say that it will also win Best Cinematography. Maybe it’s because not enough voters have seen the other films it’s competing against? Maybe it’s because no one wants to rock the boat? Maybe it’s because it really is the best above the rest? Maybe it’s a combination of all three? Who knows. So why get bent out of shape about it? Especially this year above all others. But for argument’s sake, let’s look at the other three categories Chloe Zhao’s film is nominated in at the Oscars.

Best Adapted Screenplay is an interesting race between “Nomadland” and “The Father” and one of the few that can prevent the Best Picture frontrunner from winning all six of its Oscar nominations. “The Father” is a Best Picture nominee and there’s a growing sense that voters will look to reward it somewhere. If it isn’t Hopkins in Best Actor then this is the most likely place for it to pick up a win. The other two categories where “Nomadland” faces tough competition is Best Film Editing and Best Actress. Much like “The Trial Of The Chicago 7,” “Nomadland” needs to win ACE to convince me that it has a chance at winning this category. Otherwise, it’s most likely going to go to Critics Choice and BAFTA winner “Sound Of Metal.” And then there is the highly competitive Best Actress category which I will not even bother trying to dissect here as it’s got so many moving pieces and deserves its own article (you can check out this very good pre-BAFTA one that our writer Ryan C. Showers put together though in the meantime). Regardless though if “Nomadland” wins any of these other three awards, the before-mentioned three feel locked and loaded.

Best Animated Feature, Best International Feature Film, and Best Documentary Feature all feel secure for “Soul,” “Another Round,” and “My Octopus Teacher,” respectively. “Sound Of Metal” is obviously winning Best Sound (the word “sound” is in the title. I mean, it doesn’t get any easier than that), “Mank” will undoubtedly win Best Production Design, and “Tenet” is looking great for a Best Visual Effects win. The Supporting acting categories also feel sewn up with both Daniel Kaluuya (“Judas And The Black Messiah“) and Youn Yuh-jung (“Minari“) winning BAFTA/SAG, the two awards that have Academy membership overlap. All of these films will get recognized in some way, while “Nomadland” will be crowned the overall winner of the evening. “Ma Rainey’s Black Bottom” will also definitely be winning at least one Oscar, but there’s still some debate as to whether it will win two, three, or even four! For a non-Best Picture nominee that is also missing Directing, Writing, and Editing nominations, that would surely be a feat in the preferential ballot age when we can clearly see how much the Academy loves to spread the wealth (no film in “Ma Rainey’s Black Bottom’s” position has ever won more than two Oscars since the preferential ballot was re-introduced in 2009).

Does the inevitability of some of these Oscar wins discredit the film year that was 2020? No. It absolutely shouldn’t. Just because one film dominates a category doesn’t mean the other films in contention weren’t worthy. I’ve seen a lot of people getting tired of the same winners or are now waking up to the fact that their favorites aren’t going to win and while I can always understand that frustration, I would ask people to look at the bigger picture. We lived through (and are still living through) a pandemic. We got through one of the most intense political elections of our lifetimes. We saw a movement for racial equality in the face of hatred the likes of which we haven’t seen since the Civil Rights Movement with #BlackLivesMatter. We went through a lot. It’s understandable for people’s minds to not be as emotionally invested in the Oscars as they have been in years past. But those who are too emotionally invested to the point that anything below their subjective view of perfection is unacceptable is a bit much. There’s still a lot to look forward to, even if the winners aren’t “perfect.”

We will be getting our second female Best Director winner. We may see the second Black woman win Best Actress. We will see the first Asian actress win Best Supporting Actress since Miyoshi Umeki did for “Sayonara” in 1957. We may get an all POC acting winner lineup, which would be the first time that has ever happened. There’s a lot to be excited about as we enter into the final phase of the season (Oscar voting begins on April 15th and runs until the 20th). Yes, the same films keep winning. Yes, they may not be our favorites, but we have so much to be grateful for. It’s hard to remember, but there was a time when the pandemic first started, and there was uncertainty about any of these films coming out this year. For them to come out, for us to have gotten through the stressful year that was 2020 and for us to get the nominees we eventually did, even with the inevitable outcomes forthcoming, this is still a film year that is worthy of celebration and what better way to do that than to sit back comfortably, without stress, without anger and simply enjoy the 93rd Academy Awards? Wouldn’t that be nice? And if not…there’s always next year!

I will be posting my final Oscar predictions shortly on the site, and the team will be revealing their predictions as well with me on the podcast on April 18th. Till then, be respectful, be kind to one another and enjoy the ride!