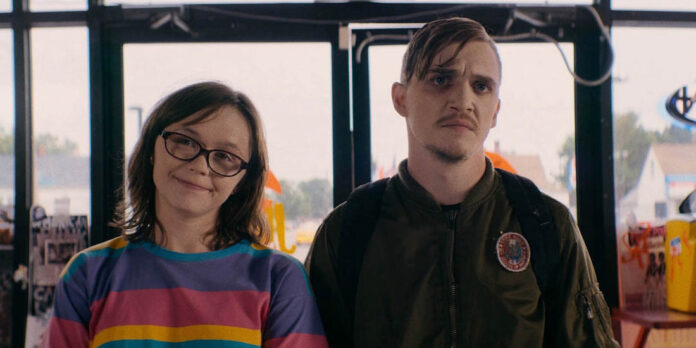 THE STORY – An on-the-lam punk rocker and a young woman obsessed with his band unexpectedly fall in love and go on an epic journey together through America’s decaying Midwestern suburbs.

​These days, it can be difficult to spawn a film that infuses itself with a daring sense of originality even when saddled with the confines of familiar archetypes. This certainly doesn’t mean stories of this ilk are lacking an inviting aura, but at a certain point, one can become overly familiarized with basic tales. Character studies about lonely, ostracized individuals finding a common connection in a world that shuns their ideology is a well-worn narrative that can be especially popular for films without the most resources. However, it takes a particularly skilled storyteller to find vibrancy in the material and create a bold execution. “Dinner in America” is such an exercise that constructs a widely invigorating tone, examining the collision of two outlandish personalities in a peculiar yet intriguing world.

At the center of this tale are a pair of misfits who are constantly at odds with an environment that seems to stifle them at every turn. Simon (Kyle Gallner) is a rebellious and antagonistic young man who waltzes from one random situation to another to support his struggling career as a heavy metal rocker in a local band. Patty (Emily Skeggs) is a lonely 20-year-old working a menial job and living with her rigorously mundane family. She’s sheltered, unconventional, and heavily medicated but harbors a fiery spirit with a deep appreciation for music. When the two cross paths, Simon invites himself to stay at her home in an effort to avoid intercepting the police who are looking for him. However, both soon recognize the bond they share as members who exist on the outskirts of general society and become determined to rage against normality together.

Though not entirely encompassing, this is a story where one of the main protagonists is a punk rocker, and it’s quite fascinating how writer-director Adam Carter Rehmeier is able to capture this tonal aesthetic. There is an on/off-kilter intensity that taps into an unruly nature, with oddball quirks to the filmmaking that makes the scenery compelling. It’s an aura that feels distinctly Midwestern, which fits the film’s Michigan locations. The chaotic restlessness juxtaposed against quiet suburbia is a fascinating dichotomy, and Rehemier presents an engaging portrait with a spirited, pulsating energy. It’s commendable that these efforts are not completely repulsive, even though some actions of these participants certainly are perceived as such. Instead, he crafts a captivating realm with an engrossing perspective.

Still, such provocative stamina is not maintained throughout the runtime. The momentum slows down considerably in the second half, and the once vitalized tenor dissipates in favor of a more muted examination. There are some benefits of this trade-off as it gives further opportunity to mine the emotional depth these two lost souls find in each other, which is quite endearing. At the same time, the script becomes meandering, and losing that expressive vigor that punctuated so much of the preceding events is a great loss. One still appreciates that the latter half compensates with strong character work, but there is mourning for the lessened sense of oddity toward the end.

Both of the leads do an admirable job of carrying the film, with particular mention of Gallner. He inhabits a nastiness that personifies all of this man’s frustrations that could very easily be tipped too far into unlikability. However, he is able to possess an enthralling charm that exists as both performative and authentic. Despite the harsh barbs he easily throws out, Gallner still finds the humanity underneath. He delivers a performance that is dynamic, boastful, and strangely charismatic. Skeggs plays her role more broadly and, as such, is not quite as effective in her turn. That is until near the end, when she is given more complexity to explore, enhancing her portrayal. She is still an alluring presence even when the writing itself isn’t always supportive. The rest of the performers are a reliable ensemble that perfectly fits the mood of this piece, helping to solidify the credibility of this idiosyncratic yet familiar backdrop.

While it may not be sustained all the way until the end, there is an arresting style to “Dinner in America” that is absolutely celebratory. It’s an appreciation for the rejects of the normalized community, and it examines this commentary with a distinct and provocative force. The filmmaking appealingly emphasizes this peculiarity, with a pair of fantastic performances at the center that are wholly riveting, even if its more poignant impact is slightly dulled by the end. On the surface, this may be yet another account of misfits finding each other amongst the banal chaos, but the care to assemble such an amiable depiction is commendable.