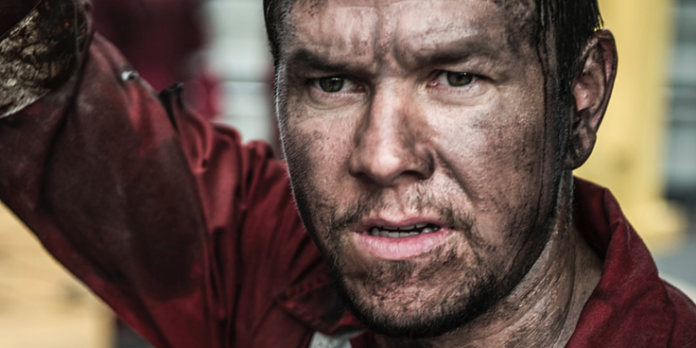 THE STORY – Based on the true events that occurred on an oil rig in the Gulf of Mexico on April 20, 2010, the story chronicles the courage of those who worked on the Deepwater Horizon and the extreme moments of bravery and survival in the face of what would become one of the biggest man-made disasters in world history.

A few years ago, director Peter Berg and star Mark Wahlberg teamed up for the true story telling of Operation Red Wings in “Lone Survivor.” The film was a respectable hit with critics and audiences alike, resulting in a pair of Oscar nominations for Best Sound Editing and Best Sound Mixing and racking in over $150 million at the box office. Now here we are, three years later, with another true story directed by Peter Berg with Marky Mark in the lead role, as the two hope for lightning to strike twice with “Deepwater Horizon.” The results are mostly the same as the film is equal parts thrilling, respectful to the true life heroes and yet, is clouded by the same unremarkable filmmaking and pitfalls that plagued “Lone Survivor.”

“Deepwater Horizon” is based on a true story that occurred on an oil rig off the Gulf of Mexico on April 20th, 2010. Out on the open water, about 41 miles from the land of Louisiana and separated from their families, the workers of the large oil rig consider themselves a family. This family consists of Chief Electronics Technician Mike Williams (Mark Wahlberg),  Chief Jimmy Harrell (Kurt Russell), the only female worker on the rig Andrea Fleytas (Gina Rodriguez) and a whole crew consisting of 126 people on board. BP Oil Man Donald Vidrine (John Malkovich) is overseeing the rig’s production, which is over 40 days behind schedule. As a result, he makes more than a few decisions which ignore the safety precautions that are in place and thus jeopardizes everyone onboard when the pipe thousands of feet below the water faces a tremendous amount of pressure from the earth. The result is an unbelievable disaster which engulfs the rig in flames, forcing everyone to evacuate and fight for their lives.

Peter Berg takes his time in the first half of the movie establishing these blue collar workers as everyday men (And women, in the case of Gina Rodriguez). They are good at their jobs, safe and ultimately want nothing more than to get back home to their families. It’s a common formula in most disaster films: Establish the characters so that when the shit starts to hit the fan (Or mud in the case of this film) we care about them. It’s the same strategy that Peter Berg used in “Lone Survivor” as he established the camaraderie the characters had with each other early on, so that when they had to risk their lives to save one another it created for an emotional experience.

While I can say that Berg’s attempts at establishing character and plot are amateurish at best, it’s the experience of the disaster itself where his talents as a director shine through. The same level of desperation, chaos and sheer terror with which he brought to “Lone Survivor” he brings to “Deepwater Horizon.” A lot of that has to do with the once again incredible sound design of the massive oil rig. From the way it operates to the sound of the ocean depths, to the entire rig eventually going up in flames, it’s a wonderful soundscape that fully immerses you into the experience of what happened on April 20th, 2010.

Mark Wahlberg, who can be quite hit or miss as an actor, has proved himself to be a capable leading man for both of Peter Berg’s latest films (With another, “Patriot’s Day” set to arrive later this year). He is not necessarily reinventing the wheel with his performance as the real-life Mike Williams, though there is a moment towards the end where Wahlberg tries to “go for it” in the dramatic emotional sense and it mostly works. John Malkovich is amusing as the BP Oil man who the film portrays as being mostly responsible for the disaster. That may or may not be a good thing depending on how you like your greedy, selfish, moneyman villain. Kurt Russell makes for a good leader, one who you can see others would be proud to follow. And the women, (Kate Hudson as Mike William’s wife and Gina Rodriguez) do a good job in attempting to overcome their one-dimensionally written characters.

“Deepwater Horizon” is a film that doesn’t set out to do much. It wants to show how the largest oil spill disaster in history happened and what became of the people aboard the rig. It’s a workmanlike film, for workmanlike people that I’m sure audiences will respond to. There is a whole other dimension to this story (Such as the aftermath in attempting to save the rig and the subsequent environmental repercussions as a result of its sinking) that Peter Berg does not even bother to tell. As a result, the film is lean and moves at a good pace but feels unfulfilling and hollow as a result, considering the magnitude of the full story. “Deepwater Horizon” is a respectable tribute to the heroes aboard that rig that risked everything so that the person standing next to them could live and in that respect, Peter Berg gets it right.