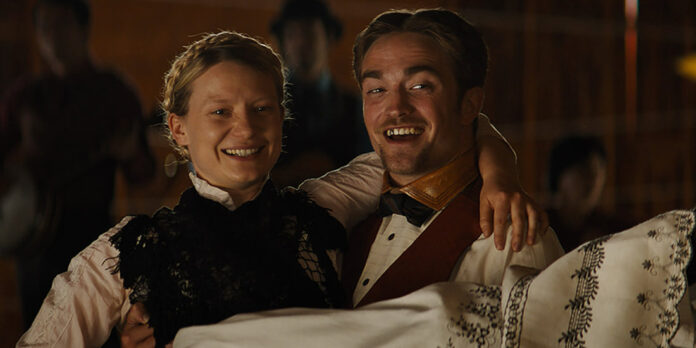 THE STORY – It’s a classic tale of the Old West: Samuel Alabaster is a man searching for his true love. Parson Henry is another, much drunker man, searching for a new start. Penelope is a woman who has found her own path. And Rufus Cornell is just a mean bastard with a taste for buckskin. Samuel traverses the Wild West with a drunkard and a miniature horse named Butterscotch; however, their once-simple journey grows treacherous, and soon the lines between heroes, damsels and villains are blurred.

Take everything you think you know about the Western and throw it out the window because the Zellner Brothers, who previously received decent success and recognition with their last film “Kumiko, The Treasure Hunter,” are back and they’re looking to throw some curveballs our way with their latest film “Damsel.” The damsel in question is Penelope (Played by Mia Wasikowska) or so you would think. This is truly a western for the modern age. While it is often gorgeous to look at it, humorous and bucks the macho-tough guy tradition of the west, it can also be painfully dull and slow throughout its runtime causing many, including myself, to lose patience with its ultimate message: that not all damsels need saving.

“Damsel” starts off traditionally enough. It’s not a dark western (Trust me, this is no “Westworld”) but rather a comical one where our lead character Samuel Alabaster (Robert Pattinson), an idealistic yet dimwitted man full of love in his heart, hopes to travel and wed the beautiful woman of his dreams Penelope, who he previously met and danced with at a party. He is accompanied by his miniature horse named Butterscotch and a preacher named Parson Henry who will wed the two once they make contact with Penelope. However, when Samuel finds Penelope under different circumstances than he previously thought, his ultimate quest for love turns out to be different than he thought.

Believe me when I tell you that the plot synopsis gives nothing away in “Damsel.” Right off the bat when the film opens with a humorously off-beat one and done scene by Robert Forster, we know that we are in for something different from the Zellner Brothers. They directed, wrote, star and produced this film, so it is entirely their vision and what an interesting one it is. The male heroes are portrayed as cowardly, delusional and quite frankly, as perverts. The main female protagonist is shown to be strong and independent. To give away any more would spoil all of the fun and there is definitely a ton of absurdist social commentary and screwball comedy in the Zellner Brother’s film to keep those who are searching for something original from the genre satisfied.

However, it’s not all smiles and laughs. At nearly two hours long, “Damsel” runs out of steam early on after a first act twist which entirely changes the narrative and then plunges the characters into a meandering trek across the wilderness dealing with other dangerous and threatening characters. The pacing never quickens enough to regain the viewer’s attention and instead of the themes of the film working their way gently into our psyches, they are constantly beat over our heads the longer and slower the journey moves along. Robert Pattinson (Who continues to stretch himself as an actor and show us more layers of his extraordinary talent), Mia Wasikowska (Who embodies female empowerment so very well here) and surprisingly one half of the Zellner Brothers himself (David), manage to hold our attention spans making this film absolutely worth watching. However, for those who are comfortable with the genre’s more familiar tropes and storytelling beats, I would advise that they watch this cautiously due to its glacier-like pacing.