Could “House Of Gucci” Become The “Bohemian Rhapsody” Of This Year’s Oscar Race? 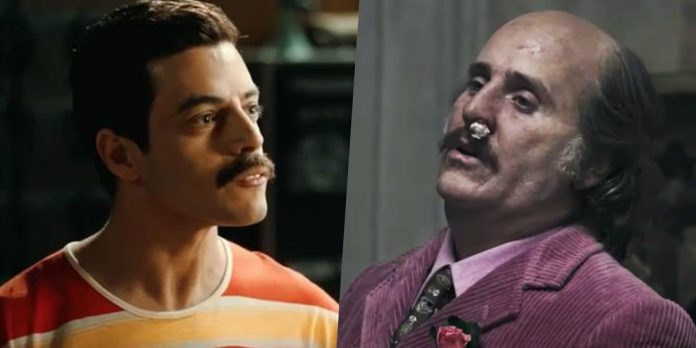 “House Of Gucci” has reviews split right down the middle, to say nothing of Oscar pundits who see it making headway with the Academy or just dread it making headway. But with promising holiday box office and splashy potential nominees in Lady Gaga and Jared Leto, it may stick around in some fashion this season, no matter how many aren’t happy about it.

This brings back memories of 2018 when critically divisive movies made a lot of noise with a far less critical voting body. As it stands, while “House Of Gucci” is seemingly far too divisive and in too big a hole to be the “Green Book” of 2018, it can still very easily be the “Bohemian Rhapsody” of 2021 if it isn’t already.

“Bohemian Rhapsody” also starkly divided critics and audiences, if not Oscar voters and people spending money at the box office. It too told a true story set in decades past, only of a rock group and its leading man instead of a fashion family’s empire and the woman who helped it collapse. It, too, was made by an A-list director, only it was Bryan Singer instead of Ridley Scott. And it too had an award-winning lead who was top-billed in a movie for the first time; only it was then merely-Emmy winner Rami Malek instead of Oscar-winning songwriter Gaga.

For all its problems and for all those who didn’t mind them, “Bohemian Rhapsody” ended up with a borderline 60% Rotten Tomatoes score, a 6.1 Tomatometer avg rating, and a 49 on Metacritic. Likewise, as of the end of Thanksgiving weekend, “House Of Gucci” has a 61% Rotten Tomatoes score, a 6.2 avg rating, and a 59 on Metacritic. Aside from the more generous Metacritic score, these two were received pretty much the exact same way, which might actually be a pretty good sign for “House Of Gucci.” “Bohemian Rhapsody” first drowned out its various critics with its big box office, including a $51 million opening weekend, an overall $216.4 million domestic gross, and international numbers that pushed it to over a billion total. Obviously, there is no way “House Of Gucci” could have matched that in a pandemic, and it likely wouldn’t have those numbers even without one. Yet a $21+ million five-day holiday gross is pretty much the equivalent of a $50 million weekend for a movie without superheroes, special effects, or a cinematic universe these days.

Once audiences were forgiving enough to keep seeing “Bohemian Rhapsody,” Academy voters followed suit. Though it had worse reviews than other controversial but voter-friendly contenders like “Green Book” and “Vice,” it kept coming until it won the Golden Globe for Best Drama, crashed into the Oscar Best Picture field, and then won the most Oscars of the year, most notably for Malek in Best Actor. If audiences are forgiving enough to keep seeing “House Of Gucci,” Academy voters could also follow suit. Like in 2018, the 2021 field is open enough for some lower-scoring films to get into Best Picture, especially in a set field of 10 nominees. And since this is a year where populist, traditional films like “Belfast,” “King Richard”” and “West Side Story” are the presumed Best Picture frontrunners, it might make too much sense if a populist, voter-friendly film like “House Of Gucci” rounds out the field as well.

“Bohemian Rhapsody” came under particular fire when Malek won Best Actor, as critics lamented that a more prosthetic-driven, voter-baity performance beat out the likes of Gaga’s “A Star Is Born” co-star Bradley Cooper and the not even nominated Ethan Hawke for “First Reformed.” In the case of “House Of Gucci,” both Gaga and Leto could run parallel to Malek in a few ways, especially Leto. Malek was a movie-leading man for the first time after his Emmy-winning work on “Mr. Robot,” yet he took to a new medium very quickly. As for Gaga, “House Of Gucci” is only her second movie leading role and her first as the top name on the call sheet, though she was still nominated in Best Actress for “A Star Is Born” and helped win Best Song for it as well. While Gaga is probably too far back to win a leading Oscar-like Malek did and like she didn’t do on “A Star Is Born,” she may have enough of the magic touch with voters to get nominated – even if it squeezes out someone with more critical raves like Penelope Cruz, Alana Haim or fellow biopic leads Jessica Chastain and Jennifer Hudson.

Of course, it is probably easier to compare Leto with Malek for many other reasons. Like Malek, Leto uses a fair share of prosthetics to look like his true-life character, only he goes far beyond using fake teeth. Like Malek, Leto has some very loud critics who accuse him of being more showy and artificial than transformative, though Leto has spent his whole career provoking that debate. But just as Malek’s brand of transformation was still catnip to voters in 2018, and just as Leto already made this formula work with “Dallas Buyers Club” in 2013, history can repeat itself here too. There are more differences besides Leto threatening in Best Supporting Actor instead of Actor. When Malek won in 2018, those upset were partly angry on behalf of Cooper and Hawke, among others. But in 2021, Best Supporting Actor is so wide open, and without any other perceived favorites besides Leto, he might wind up winning more by default than by beating a big critical champion. Best Actor 2018 had clear favorites who were ultimately ignored or snubbed, yet Best Supporting Actor 2021 may be a more muddled race, where a Leto win is met with more resignation than outrage from those not rooting for him.

As for “House Of Gucci” overall, it is in a better position than “Bohemian Rhapsody” in some aspects. While “Bohemian Rhapsody’s” biggest historical inventions were more outrageous and insulting than the usual biopic, any distortions in “House Of Gucci’s” story look pretty mild by comparison. What’s more, historical inaccuracy is beside the point of any “House Of Gucci” backlash, as those who hate it mainly feel that it wasn’t as fun or grand as the trailers suggested. While Scott may have been miscast as “House Of Gucci’s” director, at least to those who hated it, he is nowhere near the albatross Singer was for “Bohemian Rhapsody” over far viler reasons. When voters ignored him anyway and still voted for the film and Malek, it did not reflect well on them for any number of ugly reasons. At the least, votes for “House Of Gucci,” Gaga, and Leto would merely reflect more typical debates and questions over voters’ tastes. Maybe this won’t come close to the debacles of 2018 because 2021 is already shaping up to outdo that low bar. While “Belfast” and “King Richard” would be the first pair of traditional, lower-rated films to lead the Best Picture field since “Green Book” and “Bohemian Rhapsody,” they have hardly garnered the same level of backlash, resentment, or bad reviews. And while 2021 may have more voter-friendly than critic and Film Twitter-friendly films in the field, only “House Of Gucci“ has come close to a firestorm for being in the mix anyway, at least to this point.

Perhaps with an overload of typical voter bait films like “Belfast,” “King Richard”,” “Don’t Look Up,” “Being The Ricardos” and “Dune,” and late-breaking studio films “Nightmare Alley” and “West Side Story” as well, there really won’t be much more room for something like “House Of Gucci” to get in too. And unlike with “Bohemian Rhapsody,” it probably won’t have the Golden Globes to give it a boost, as the Globes aren’t airing on NBC this year. If “House Of Gucci” still finds its way into the Best Picture lineup, if Gaga sneaks herself into Best Actress and brings about an upsetting snub along the way, and if Leto rampages through Supporting Actor again, this will likely be considered the Oscar villain story of 2021. But there is still time and hope for it not to be a villain of “Bohemian Rhapsody” proportions, even if they are starting on the same path.

Have you seen “House Of Gucci” yet? What Oscars do you think it will be nominated for this year? Check out the NBP team’s latest Oscar predictions here. Let us know your thoughts in the comments section below or on our Twitter account.