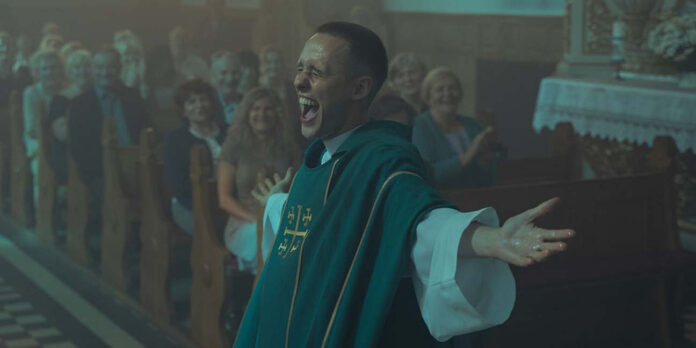 THE STORY – A reformed criminal is prevented from applying to the seminary after his release, so he dresses as a priest and ministers a small town parish.
​
THE CAST – Bartosz Bielenia

​​​The topic of religion has always been one of the most fascinating subjects that films can approach. While there are many that are cheaply made and appeal to very broad themes, others can look for a deep, introspective conversation about its value and purpose for the people of this world. There are varying degrees of success in regards to this topic, but there are always some intriguing results produced. “Corpus Christi,” the Oscar-nominated International Feature submission from Poland, looks to tackle such themes. Its results are mixed but ultimately effective, particularly when they are anchored by the performance of the leading actor.

This bleak character drama centers itself around Daniel (Bartosz Bielenia), a troubled young man serving out his sentence in a juvenile detention center for the crime of murder. It’s during his time here that he has a spiritual awakening, and feels the calling to bring religion closer into his life. However, he’s constantly reminded of his criminal past, which prevents him from entering the priesthood. When he’s released on parole as part of a work program at a local sawmill, he instead takes matters into his own hands. Donning the suit he stole from the jail’s own vicar, he masquerades as a priest to the small town’s parishioners. When the town’s local priest takes ill, Daniel is thrust into the position of being the new spiritual leader. This is when he comes to be more entrenched in many of the dark secrets the residents hold, as he seeks to challenge many of their own beliefs.

Almost every bit of success this film achieves is laid at the feet of Bielenia’s performance. The embodiment of a complicated soul, torn between his violent nature and benevolent urges, shines through every moment he’s on-screen. That mix of energies is portrayed in an authentic way, and he manages to capture a character full of complexities. It’s the type of performance that keeps one riveted throughout, with a vulnerability that constantly peaks through the rough exterior. They may be familiar character traits, but Bielenia executes them with a fantastic force and an engaging screen presence. The supporting members of the cast all give fine performances themselves, but none come close to the power of the film’s protagonist.

Of course, a film needs to be more than just its central character, and there’s much credit that can be given to the film’s director, Jan Komasa, and writer, Mateusz Pacewicz, for crafting a story that looks to find answers in a commentary on how destructive, and even rewarding, faith can be. Komasa, in particular, manages to capture a space that feels both distant and inviting, with a cold calculation that lets you in on how these characters interact with a complicated world. The direction never seems to call that much attention to itself; instead, focusing on the somber character moments that drive most of the film’s momentum. At the same time, there are many moments when the film’s pacing feels quite languished, and it often creates roadblocks to becoming even more invested in this world.

Pacewicz’s script has a mystery element running through most of the narrative, and while this creates a sense of intrigue in the beginning, it ultimately has the effect of also limiting the emotional connection with these characters. It’s certainly appreciated that the story explores themes related to the hypocrisy religion affords people, particularly in the manner they can rejoice in the misfortune of others in a time of grief. The film also looks at how the power of religion can reach even the most disparate of souls and what it may be ultimately providing. Still, the roads it takes to get there are often tedious and dull, and it lessens the impact once we arrive, particularly with an underwhelming ending. There are worthy topics of discussion here, but they’re not always executed in the most engaging way.

“Corpus Christi” has many elements regarding its story and filmmaking that are worthy of praise. The direction and writing bring up many interesting ideas, but oftentimes, they are lacking in a method that feels truly compelling. While these themes are intriguing, it’s really the performance from its lead that makes you completely invested. Bielenia is astounding in a role that requires so much nuance, and he manages to play all of those layers perfectly. In the end, the film may never say everything it wants to in the most eloquent way, but it has enough to provide yet another example of how faith affects our lives.