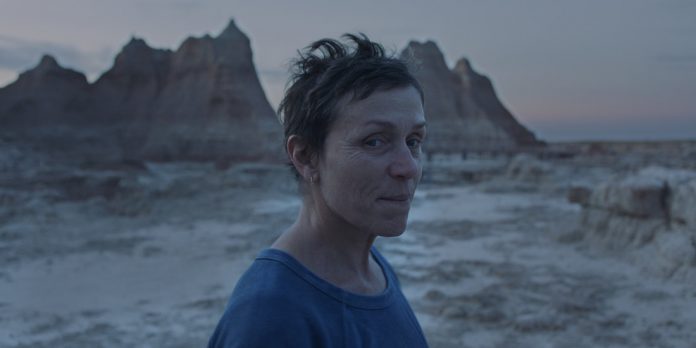 ​In a big move for the fall film festivals (which are working together this year more than ever), Searchlight Pictures Chairmen Nancy Utley and Steve Gilula made an announcement regarding Chloe Zhao’s (“The Rider“) Oscar-contender “Nomadland” starring Frances McDormand (“Three Billboards Outside Ebbing MIssouri“) and David Strathairn (“Good Night, and Good Luck”).

​
Zhao’s third film, will have its world premiere with simultaneous screenings at both the 77th Venice International Film Festival and the 45th Toronto International Film Festival. Director, writer and producer Chloe Zhao will virtually introduce the film along with Frances McDormand. But that’s not all. Despite being recently cancelled, Telluride announced a special “Telluride from Los Angeles” drive-in screening in Southern California later in the evening that same night, featuring in-person appearances by Zhao and McDormand. Additionally, the New York Film Festival announced that “Nomadland” will be the Centerpiece Selection of this year’s festival and Searchlight will look to release the film domestically and internationally later this fall.

Nomadland follows Fern (Frances McDormand), a woman who, after the economic collapse of her company town in rural Nevada, packs her van and sets off on the road to explore a life outside of conventional society as a modern-day nomad. The film includes real nomads Linda May, Swankie, and Bob Wells as Fern’s mentors and comrades, as well as actor David Strathairn.

Ater all of the negative news we received last week regarding the premieres of big tentpole films being pushed or moved off of the release calendar completely, this news serves as a bright reminder that there are still exciting things to look forward to in 2020. “Nomadland” is already one of the heavily predicted Oscar frontrunners by the Next Best Picture team and we cannot wait to see what Chloe Zhao has to bring us. You can find more on this story here.

What do you think of this news? Are you excited to see “Nomadland?” Let us know in the comments section below or on out Twitter account.