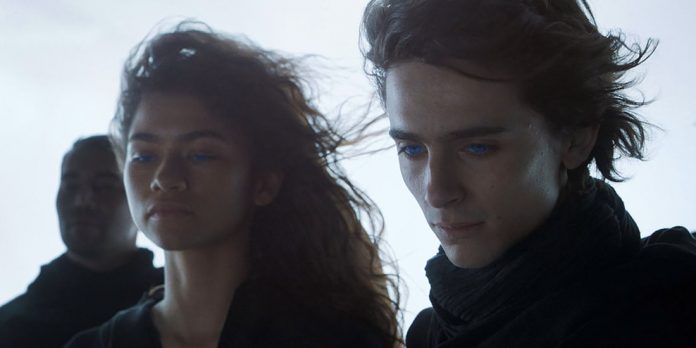 With principal photography for “Dune: Part Two” set to begin in July, casting rumors for the sequel has started trickling in. As far as we know, most of “Dune’s” cast will be returning to their previous roles. Anyone who knows how the second half of Frank Herbert’s novel is already aware Zendaya’s Chani will take on a more prominent part in the story as Rebecca Ferguson’s Lady Jessica settles into the background. With the death of their characters, Jason Momoa, Sharon Duncan-Brewster, and David Dastmalchian won’t be returning, freeing up space for the ensemble cast to expand and introduce a handful of new names.

Two names have already been heavily rumored to be joining the cast in new roles for “Dune: Part Two.” In an unlikely “Little Women” reunion, the Oscar-nominated Florence Pugh will likely be taking on the role of Princess Irulan, as she and Timothée Chalamet will share the screen for the second time. Meanwhile, the lead of the Baz Luhrmann’s upcoming musical drama biopic “Elvis,” Austin Butler (“Once Upon A Time In Hollywood“), has entered into final negotiations over Harry Styles and Barry Keoghan to be selected for the part of Paul Atreides’ lethal rival Feyd-Rautha Harkonnen, previously embodied by Sting in David Lynch’s adaptation of “Dune.” However, with the absence of any official update, two equally important roles are still left unfilled which I want to explore more thoroughly.

The first of these is the young Alia Atreides. If “Dune: Part Two” follows the second half of Frank Herbert’s seminal sci-fi novel as closely as its predecessor did, Alia Atreides will play an infrequent but significant supporting role and will become directly intertwined in the story’s climactic conflict. The character is the daughter of Lady Jessica, who Paul knows is pregnant in Part One. Despite being only two years old, thanks to the wild imagination of Herbert, the character is gifted with the consciousness and maturity of an adult due to early exposure to the story’s pivotal drug, Spice Melange.

Alia Atreides presents a complex challenge for Denis Villeneuve and his casting team, as the character’s nature might be deemed too fantastical for the director’s grounded adaptation of the story. It is, therefore, possible that this version of the character seen in “Dune: Part Two” will be aged up, either by increasing the length of the time jump between the two films or by adding in a mechanism by which the character experiences accelerated aging as a side effect of her close contact with the Spice Melange. With that added flexibility, casting the character becomes a more straightforward task.

Julia Butters isn’t a name that most audiences will instantly recognize, but it soon will be. The young actress racked up an impressive number of notices for her excellent turn in “Once Upon A Time In Hollywood” and is set to star in Steven Spielberg’s semi-autobiographical “The Fabelmans” later this year, which has already been earmarked as an early awards contender. Under the direction of Tarantino, Butters showed her ability to portray a character with a maturity above her years, which will be one of the essential qualities for whoever takes on the role of Alia Atreides. Now thirteen years old, the actor also shares a loose resemblance to Chalamet with her dark, sharp features while still looking young enough to play a character with an age in the single digits.

Alternatively, if Villeneuve does decide to dramatically increase the age of Alia Atreides to the early or mid-teens, Thomasin McKenzie could be a perfect fit. McKenzie might be twenty-one, but the softly spoken actor’s appearance and demeanor allow her to easily seem younger than her age, with assistance from the right cinematic trickery. Like Butters, she shares a proper resemblance to Chalamet, with her angular jaw and oval eyes. At the age of nineteen, the actor starred in Taika Waititi’s Oscar-nominated “Jojo Rabbit” as a Jewish teenager much younger than herself and more recently took on the role of the innocent housekeeper Lola in Jane Campion’s “The Power of the Dog.” However, her recent part in “Last Night In Soho” highlighted her ability to contain underlying aggression, capable of slipping out when required – a trait shared by Alia Atreides.

While the two actors would represent different visions of Paul’s sister, if Villeneuve wants his character to be closer to the Alia Atreides from the novel, there is still the possibility that a younger actor, currently unknown to audiences, could take on the role. As Jude Hill demonstrated so recently in “Belfast,” a young and inexperienced actor can still shine under the right, careful direction – and make a name for themselves along the way.

The second unfilled role is that of the enigmatic ruler of the known galaxy, Padishah Emperor Shaddam IV, a figure who looms large over “Dune’s” entire story. In addition to being the father of Pugh’s Princess Irulan, the character is described by Herbert as being in his mid-70s, with the body and mind of a man half that age thanks to the anti-aging effects of the Spice Melange. Taking its lead from the novel, the part will require an actor capable of simultaneously conveying a strength of presence and authority, along with the paranoid vulnerability that caused him to conspire with Baron Harkonnen to orchestrate the downfall of House Atreides.

With experience in overt and covert villainy, Mads Mikkelsen could be a leading candidate for the role. The actor is on the older end of the spectrum for the character but would undoubtedly be able to exhibit his essential components: his imperceptibility, his personal and political power, and his calculating mind. Mikkelsen has shown his caliber in numerous roles, not least as the antagonist in “Casino Royale” and most recently in “Fantastic Beasts: The Secrets Of Dumbledore,” where he elevated the film as Johnny Depp’s replacement for the dark wizard Grindelwald. His casting would also mark a reunion with cinematographer Greig Fraser, who he worked with on “Rogue One: A Star Wars Story” and won the Oscar for Best Cinematography for shooting “Dune: Part One” at the 94th Academy Awards.

If Villeneuve wanted to instigate his own reunion, Benicio Del Toro might be a name in consideration for the role. After the two worked together on “Sicario,” the director will understand better than most how the actor can harness a unique combination of charisma and cunning, perfectly befitting of the paranoid ruler of the universe. Like Mikkelsen, Del Toro would be an older-looking iteration of the character, but one that would still be capable of conveying an unsettling but subtle style of intimidation.

Alternatively, Villeneuve may want to depart from Herbert’s source material to portray the character as a more formidable figure. Idris Elba is closer to the right age for the character and has plenty of form playing characters with more questionable morality. His appearance in “Dune: Part Two” would give the character a more regal and confident quality, with his experience in “Beasts Of No Nation” and the “Thor” series as touchstones. In casting Elba, Villeneuve would be able to provide a clear contrast between Shaddam IV and the film’s primary villains; the Harkonnens.

Like the rest of “Dune: Part Two’s” cast, the actors who take on the roles of Alia Atreides and Padishah Emperor Shaddam IV are unlikely to garner any awards attention for the roles. However, they will be taking up parts in what has the potential to be a significant new franchise considering the success critically, financially, and awards-wise with the first film. The actors will also have the chance to work with one of the industry’s leading directors in Villeneuve, who will be keen to ensure that the new cast members work within the tonal framework he established with “Dune: Part One.”

Whichever creative decisions the director chooses to make, whether that’s increasing Alia Atreides’ age or rebuilding Shaddam IV into a more directly imposing personality, his version of the characters will leave an indelible mark on the legacy of “Dune.” Audiences are, therefore, understandably keen to see who the director will choose, and with principal photography due to start in less than three months, an announcement on the final casting decisions won’t be too far in the distance.

Who do you think could take on the roles of Alia Atreides and Padishah Emperor Shaddam IV? Would Julia Butters or Thomasin McKenzie work as Paul’s younger sister, or should Villeneuve stick to the novel and cast a younger unknown actor? Would the casting of Mads Mikkelsen or Benicio Del Toro be too obvious? If so, could Idris Elba be the solution? Please let us know your thoughts in the comments section below or on our Twitter account.