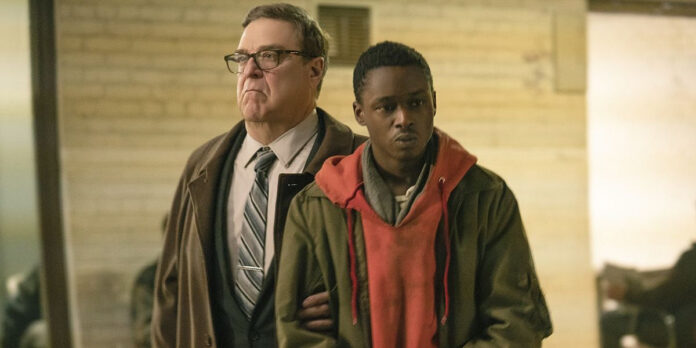 THE STORY – Residents of a Chicago neighbourhood deal with life under extraterrestrial rule.

​​Science-fiction has been a genre that I’ve personally always really enjoyed. At its most basic levels, it can serve as mindless entertainment that indulges in purely in a joyfully spirited attitude. When it wants to engage in deeper themes, it has the great potential to introduce philosophical discussions about a myriad of intellectual topics. It is a rather diverse genre that often gives way to many shades of storytelling. This film also attempts to find certain statements within this mode, and the results are interesting, if decidedly mixed.

Like many films in this genre, the story takes place in a not-too-distant future within a dystopian state. It is several years after an alien invasion that has now turned into an occupation, and the governments have capitulated to serving their extra-terrestrial overlords. Gabriel (Ashton Sanders) tries to save and plan for an escape outside the walled-up Chicago, but he increasingly gets drawn into a plot that includes both collaborators and resisters of the world. John Goodman plays Mulligan, a police officer in charge of bringing peace through the neighborhoods and cracking down on those who fight. The investigation leads further into a network of rebels that attempt to reclaim some form of humanity back from the invaders.

There are some things to appreciate in the film, particularly when it indulges in more of the procedural aspects of the resistance’s attempts to sow chaos and rebellion. These are the moments that director and co-writer Rupert Wyatt excels at the most. I was always a fan of how he helped to elevate “Rise of the Planet of the Apes” into such rich material, and there are glimpses where he provides that here. The conflict these people face is laid out in an interesting way, and following those mechanics can be engaging. The world building provided could have been stronger, but it’s enough of a foundation to be informative and interesting. There’s enough commentary about what humanity is willing to give up in order to keep peace among oppressive forces and why the necessity to fight against that remains strong.

However, that isn’t really enough to carry the film, and ultimately it fails quite profusely on the character front. Most of them are introduced with not that much backstory and serve little purpose beyond moving the plot along the track. It becomes quite tedious after a certain point as one struggles to find the emotional connection to these characters. The same could also be said for many mechanics of the plot, particularly ones that rely on such heavy character motivation. In truth, it never really comes through, at least not in a meaningful way. It feels like one of those stories that needed either more time to flesh things out or less time to streamline events. As is, it feels a bit hollow and doesn’t retain much staying power.

The performances in the film are solid overall, but with the aforementioned lack in character depth, there’s not a whole lot of opportunities for people to craft something truly spectacular. Sanders did phenomenal work in “Moonlight”, and here he does deliver a good performance. However, despite being the character with the strongest arc, the film hides him away for long stretches which leaves his impact minimal. Goodman has always been able to capture stoicism quite well, but he too feels under-utilized. Everyone else shows up and does an adequate job, but are given even less to work with. Again, it makes their performances feel only surface level. This is particularly felt with a character played by Vera Farmiga, a completely thankless role that an actress of her caliber is far beyond deserving.

There is most certainly a failing when it comes to the storytelling that holds the film back the most. The lack of characterization ultimately does hurt it from becoming engaging and keeps the audience at an arm’s length from becoming truly invested in the plot. At the same time, there are moments when it does find a rhythm in its procedural nature to be more captivating, and it helps to highlight the clinical arguments of occupation within the film. The actors do their best with the material given, even if that material doesn’t provide them with much. It can be frustrating at times, ultimately there’s a kernel of a good film to watch here that just doesn’t quite come to the surface. It is nowhere near the best of what the genre has to offer, but it still offers an interesting perspective that if given more room to breathe, could have been quite something.