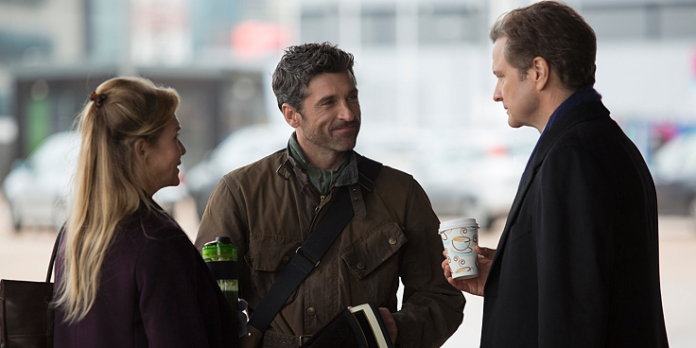 THE STORY – Breaking up with Mark Darcy (Colin Firth) leaves Bridget Jones (Renée Zellweger) over 40 and single again. Feeling that she has everything under control, Jones decides to focus on her career as a top news producer. Suddenly, her love life comes back from the dead when she meets a dashing and handsome American named Jack (Patrick Dempsey). Things couldn’t be better, until Bridget discovers that she is pregnant. Now, the befuddled mom-to-be must figure out if the proud papa is Mark or Jack.

​It’s hard to believe that twelve years have passed since we last saw Bridget Jones in the ill-fated “Bridget Jones: The Edge Of Reason”.  There was a lot riding on the highly anticipated sequel to 2001’s Oscar-nominated “Bridget Jones’s Diary”, and sadly the second attempt felt phoned in and lacking the wit of the original. So it is my great pleasure to announce that not only is “Bridget Jones’s Baby” a welcome return for both the character of Bridget and star Renée Zellweger, but it just may mark a high point for the series! That’s right, this long awaited follow up more than makes up for any bumps along the road or lost time. It is simply a delight from start to finish!

Audiences unfamiliar with the franchise needn’t worry. This is not a film that requires much previous knowledge going in. We open on Bridget not far from where we first met her in 2001- alone in her apartment with a glass of wine, writing her diary, and wondering how she ended up alone on the eve of her 43rd birthday. Gone are the days of Daniel Cleaver and Mr. Darcy. As the film’s unofficial theme song reminds us, Bridget is once again “all by herself”. That is until two fateful meetings. Our hero crosses paths not only with Colin Firth’s Mark Darcy (who never seems to be far from Bridget even though they have broken up) but also Jack (Patrick Dempsey), a suave American mathematician. After an unexpected fling with both men on separate occasions, Bridget comes to the shocking revelation that she is a) pregnant and b) unsure of who the father is. What follows plot wise is nothing new of course, but the way in which the film handles the situation is so well done. This is due to a combination of winning performances and a sharp screenplay written by Helen Fielding, Dan Mazer, and two-time Oscar winner Emma Thompson (whose work always delights).

As entertaining as the story may be, this film is all about Bridget, as it should be. Renée Zellweger plays the beloved character with such warmth and injects her with so much down to earth humor, that watching her is as fun as anything I’ve seen in a movie this year. She is simply a delight and nails the British accent. Zellweger received an Academy Award nomination for her performance in the original 2001 film. While I don’t see the same fate this time around, she’s as good as she was fifteen years ago. As for Colin Firth and Patrick Dempsey, they make the most of what they are given. They work in service to Bridget, and if anything they get the opportunity to wear outfits so perfectly suited to their differing personalities. Jim Broadbent and Gemma Jones make welcome cameos yet again, and screenwriter Emma Thompson steals her scenes as Bridget’s wisecracking obstetrician.

In the end, “Bridget Jones’s Baby” doesn’t offer anything necessarily new cinematically. But the nice thing is that it isn’t trying to. We all know what direction it’s going in, yet none of that matters. The sheer joy of watching familiar characters interacting together is entirely pleasurable enough. After a rough summer of studio titles packed to the gills with mindless superhero titles and blockbusters, here is a smart comedy that not only appeals to an older audience but features a well-written middle-aged female character with suitable suitors. Call it fan service if you must, but it’s great either way. “Bridget Jones’s Baby” is a delight!