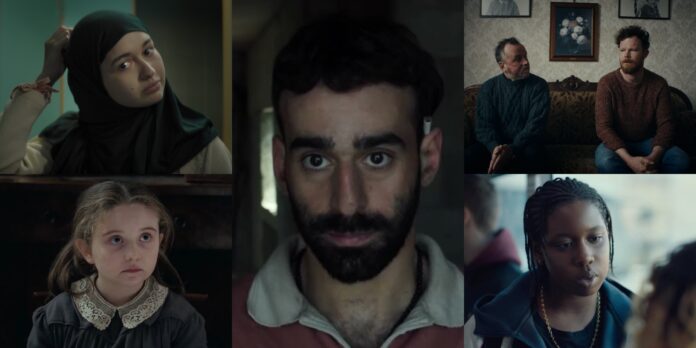 The nominations for the 95th Academy Awards are imminent, yet the shorts remain as perplexing as ever. With so few precursors to help sort out the contenders, picking the five nominees is a bit of a wild guess. Thankfully, the Academy narrows the contenders down to fifteen short films, which is a good starting place. Though there’s still not much to go off of, let’s break down the fifteen films on the shortlist to figure out the nominees.

In Academy Awards history, there has never been a year without at least one English-language nominee for Best Live Action Short Film. This year’s shortlist of fifteen films only features one, “An Irish Goodbye,” which might have a leg up on the competition for that alone. The BAFTA-nominated black comedy could win the entire category, not just because of its language. It’s highly entertaining and has a sweet edge to it, featuring two brothers reuniting after their mother’s death and working together to complete her bucket list. Very funny and very watchable; it’s tough to see “An Irish Goodbye” missing the nomination.

Perhaps the title with the most extensive campaign behind it is “Le Pupille,” Alice Rohrwacher’s Italian short film available on Disney+. With producer Alfonso Cuarón and the power of Disney behind it, this has been heavily campaigned in the last few weeks. It helps that the short is quite good, too. This charming, cute little tale has a loose narrative structure but centers around girls in a Catholic orphanage in the 1940s. It’s a strong contender, both with the quality of the work and the firepower behind the campaign.

Shorts with kids often do pretty well in Live Action Short, which should help “Le Pupille,” along with the French short “The Right Words.” Set mainly on a bus, “The Right Words” follows a young teenager struggling to find a way to confess his love to a classmate. His sister puts immense pressure on him to go for it, causing him anxiety and plenty of attention from the rest of the students on the bus. It’s a very real, awkward, and ultimately cute short that could do well. Another youth-driven short, though one with quite the opposite tone, is “Ivalu.” Set in a village in Greenland, this moving, tragic, and well-crafted short follows Pipaluk, a young girl searching for her missing sister, Ivalu, who was being abused and ran away from home. Another short tackling abuse is “The Red Suitcase,” a tense drama about another young girl fleeing abuse. As a young Iranian girl lands at Luxembourg Airport, she must decide whether to stay with the older man she’s being forced to marry or to escape. It’s heavy but gripping through and through.

“Tula” isn’t quite so tragic but follows a cleaning lady in a high school who becomes a confidant for a young girl in trouble. This sweet short is good but feels too slight compared to other contenders. The same could be said for “The Treatment,” the Spanish short about a balding man and the clinic that promises a perfect cure, though there may be side effects. It’s a very funny short film with a great ending. The Academy does nominate the occasional comedy short, but they’re few and far between, so I’m not hopeful for it.

One of the more bizarre selections is “Plastic Killer.” It’s aiming for comedy and some moments land, but it’s a strange story about a woman who believes a plastic bag is her daughter. This didn’t land for me. “Night Ride” is another short that could prove divisive, which means it’s in an excellent spot to get nominated. Ebba, a little person waiting for the bus, gets impatient with an inconsiderate bus driver and takes things into her own hands. As she takes the bus for a joyride, she eventually picks up a trans woman who receives fairly brutal harassment from two men. While this short is well-intentioned, dramatizing a genuine hate crime in short form with a comedic, even charming tone doesn’t feel quite right. Still, the Academy may go for it. Last year they nominated “The Dress,” which was quite similar in plot, though without the hate crimes.

“Almost Home” features the highest production value of any of the shorts, crafting a gorgeous sci-fi short that’s pretty engaging. Shortly before their spaceship returns to Earth, a mother and son learn of an outbreak on the ground. They must quickly decide what they will do now. Among these shorts, it features the best visuals and style by a mile. Narratively, it’s good as well, even if some others on the shortlist are more compelling. Another space-themed short, though one set Earth-side, is “Sideral.” Beautiful black-and-white cinematography captures the familial aftermath when a mother stows away on a rocket launch in Brazil. It’s good but a bit too understated to stand out.

It’s tough to say how the Academy will react to “The Lone Wolf.” When a radio DJ is taking calls late at night, he hears a familiar voice. After engaging in conversation, it becomes clear this person believes the DJ sexually assaulted the caller’s son, and he wants revenge. The short was very effective at building tension through a well-executed single take (or at least the appearance of one) and good writing. Still, the Academy might not respond well to a story of conflicting accusations of assault, especially when such accusations have rocked Hollywood since the beginning of the MeToo movement. It’s not a subtle short, but it’s effective. “All In Favor,” about a condo board meeting to decide the fate of a potential tenant with mental health issues, is another unsubtle short, though less satisfying. It’s well-intentioned but blunt as a hammer.

Best Documentary Short routinely awards films about the Holocaust, but this time it’s Live Action Short with a World War II-era contender. Set in Ukraine in 1943, “Nakam” focuses on a 12-year-old violinist, Mitka, playing music for a tavern. He plays for a primarily German crowd, even though Mitka is part of the Jewish resistance. I find it hard to believe the Academy won’t nominate “Nakam,” though it is a bit long for the story it’s telling.

Finally, Sundance prize winner “Warsha” is a beautiful, simple short about a crane operator in Beirut. High above the city, where no one else can see him, the man can fully express himself and dream about who he really is. It’s a queer story about freedom, or at least feeling free, with a dream sequence that isn’t subtle but really works.

The shorts that feel like no-brainer predictions are “An Irish Goodbye” and “Le Pupille.” After that, the joy and melancholy of “Warsha,” along with the charming kids in “The Right Words,” feel like solid possibilities. While “Night Ride” is reminiscent of last year’s nominee “The Dress,” and “The Lone Wolf” is somewhat topical, I’m putting “Nakam” in the last spot.

What do you think will be nominated for Best Live-Action Short Film at this year’s Academy Awards? Please let us know in the comments section below or on our Twitter account and check out our latest Oscar nomination predictions here.