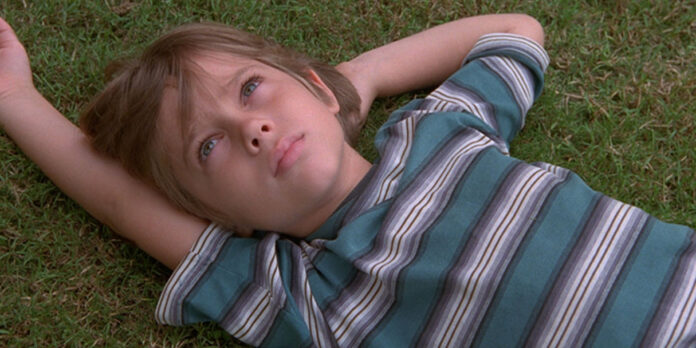 THE STORY – The joys and pitfalls of growing up are seen through the eyes of a child named Mason (Ellar Coltrane), his parents (Patricia Arquette, Ethan Hawke) and his sister (Lorelei Linklater). Vignettes, filmed with the same cast over the course of 12 years, capture family meals, road trips, birthday parties, graduations, and other important milestones.
​
THE CAST – Ellar Coltrane, Patricia Arquette, Ethan Hawke, Lorelei Linklater, Libby Villari & Marco Perella

​​​Childhood is the most ephemeral period of our lives. We spend most of it being told what to do, how to behave, and yearning, often desperately, to make decisions of our own. When the time comes to start making those decisions, however, we can’t help but look back at our youth with reverence and a little bit of sadness. One of life’s great ironies is that we fail to appreciate the gift of childhood until we’re entrenched in adulthood. It’s an experience that’s been relayed in countless paintings, novels, and pop songs, but few have been able to capture it as authentically as Richard Linklater’s 2014 masterpiece “Boyhood.”

The selling point of “Boyhood”, both artistically and commercially, is that it was filmed in segments over the course of twelve years. This radical approach did away with the need for recasting or unconvincing makeup and allowed the actors to age alongside their characters in real-time. It maintains the illusion of cinema by removing the need for illusion at all and forces us to consider what we see as truth. In many ways, it is. The titular boy, Mason (Ellar Coltrane), may be a fictional character but the actor playing him is not and the identity crises and awkward phases he experienced in his own life helped shape Linklater’s daringly ambitious vision. It’s as much his story as it is Mason’s.

The film has a loose premise, but no plot. It plays out episodically and sporadically, like photos arranged in a scrapbook. Mason grows up in the company of his sister Samantha (Lorelei Linklater) and his determined single mother Olivia (Patricia Arquette). His father, Mason Sr. (Ethan Hawke), appears on occasion, as do several disagreeable stepdads and begrudging moves. He drinks his first beer, navigates his first heartbreak, and discovers a passion for still photography. Linklater flirts with coming-of-age tropes throughout the film, but he’s smart to avoid the superficial pitfalls that come with them. He understands that we are the sum of our messy experiences, rather than the product of a few, precise story beats. There is no one scene that defines Mason, and seeing him discuss “Star Wars” with his old man proves just as crucial as the scene in which he departs for college.

Sandra Adair’s editing is crucial to selling these assorted moments. At nearly three hours, the film masterfully transitions between years without so much as a title card or timestamp. Once again, the artistic direction mirrors the aging process that it’s meant to depict. In blurring the lines between each “chapter,” the film turns the viewer into a relative who visits Mason once a year and is therefore taken aback by how much he’s grown. One minute he’s getting a buzzcut, the next he’s riding around his neighborhood with a full head of hair. The changes in form are seamless even if the images presented are surprising, which creates an impressively fluid viewing experience. It’s the inverse of Linklater’s “Before” trilogy, which chronicles the aging of characters through concentrated periods of time.

Coltrane and Lorelei Linklater are not actors, as their sometimes amateurish line readings can attest. What they bring to the table is honesty and a sense of naivete that registers far more relatably than the average teen star. The former even manages to overcome the self-consciousness of his pre-teen “chapters” and deliver some touching moments by the final act. The always charming Hawke is in his element as the adolescent “cool dad,” urging his kids to do better despite his own shortcomings. His maturation into a responsible family man (via second marriage) is perhaps the film’s most bittersweet character arc, in that he is too late to be a proper teacher to his first two children. Both Hawke and Linklater are products of divorce, and the heartfelt, occasionally awkward chats between Mason Sr. and his son carry the remnants of their own divided childhoods.

That being said, the film’s heart lies with Arquette and her searing depiction of motherhood. From the onset it’s clear that Olivia is the stern parent, uprooting the kids from their home and constantly nagging them about their school work. She marries twice over the course of the film, and in both instances, the alcoholism of her partners leads to abuse and divorce. We see Olivia at her lowest points, only to see her rebound and continue to sacrifice for her family. Arquette expertly captures the tenacity of the character, all the way up to her explosive final scene. It’s here, in this outburst of emotion, that we come to appreciate all she has done, and all mothers everywhere have done. It’s a career-best performance for Arquette and a well-deserved Oscar for Best Supporting Actress.

Unfortunately, “Boyhood” is not exempt from criticism. The aesthetic advantage of shooting over twelve years comes with the disadvantage of having an unfocused script. In comparison to Linklater’s “Before” trilogy, which develops themes and characters with surgeon-like precision, “Boyhood” can sometimes feel plodding, as though the purpose of a particular “chapter” was determined after the fact. The “chapter” where Mason and his friends hang out with older kids feels like a rare instance of Linklater filler, not only in tone but in the grating depictions of the other characters. There are also strange asides that pepper the film, like the day laborer who returns to espouse a moral or the scene in which a teacher flirts with Mason at his graduation party. Linklater’s films are often so minimal in presentation that even the smallest hiccup can stick out, and suffice to say, “Boyhood” has its fair share.

Even with these minor gripes, “Boyhood” remains a staggering achievement in modern filmmaking. It transcends the art form through its radical depiction of time, and it does so with a delicacy that few directors could muster. I happen to be the same age as Mason, so the references in the film connect with me on a hyper-specific level, but the experiences are such that they can connect with someone thrice my age or someone who hasn’t even been born yet. Linklater did the unthinkable, which is to capture our collective youth on film so that we may be able to relive it over and over again.