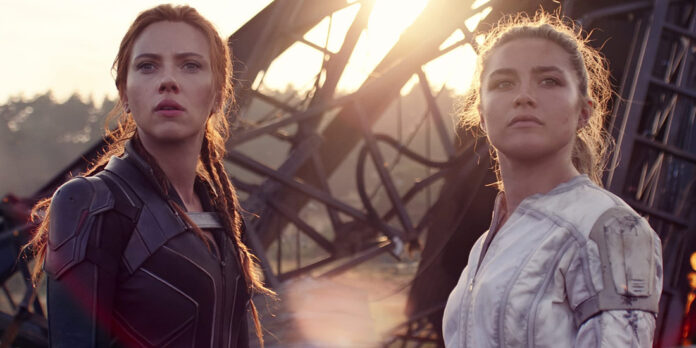 THE STORY – At birth the Black Widow (aka Natasha Romanoff) is given to the KGB, which grooms her to become its ultimate operative. When the U.S.S.R. breaks up, the government tries to kill her as the action moves to present-day New York, where she is a freelance operative.

​​​The film “Black Widow” has the kind of high stakes that would make any movie studio nervous, much less Marvel itself. It’s the long-awaited (many would argue overdue) solo film for one of the core Avengers, Natasha Romanoff, who Scarlett Johansson has played since 2010. It simultaneously must serve as a worthy goodbye to a character that we saw die in “Avengers: Endgame” back in 2019 and introduce a new character, Yelena Belova (played by Oscar nominee Florence Pugh), into the MCU. It is also the first follow-up to Johansson’s double Oscar nominations in 2019 for “Marriage Story” and “Jojo Rabbit.”

It would have been easy for this film to be a disappointment, particularly considering the long history of Marvel not being sure what to do with Natasha. Through her 11 year history, she has, arguably, suffered from bad writing more than any other character in the MCU, been overly sexualized, passed around as a love interest to multiple characters, and was never entirely given her due. So it’s thrilling to see director Cate Shortland and writer Eric Pearson deliver a fitting tribute to Black Widow with a lovable set of new characters.

After a gripping prologue set during Natasha and Yelena’s childhood, there is a fantastic extended credits montage that gives the audience insight into the Red Room. For those who don’t remember, that’s the Russian top-secret Black Widow training program that turns young girls into controlled assassins. Twenty-one years later, we see the Natasha that we’re familiar with from the Avengers films. Set in-between “Captain America: Civil War” and “Avengers: Infinity War,” this film finds Nat on the run for violating the Sokovia Accords.

Before long, she’s pulled back to Budapest, where she runs into her younger sister-like figure, Yelena. They soon reconnect with the family that Natasha hasn’t seen in years: the “Red Guardian” Alexei (David Harbour, who seems like he’s having a great time) and Melina (Rachel Weisz, as charismatic as ever). The stakes feel high throughout the whole film, as the head of the Red Room, Dreykov (Ray Winstone), is a compelling villain both for his global threat and for the women on a personal level. “Black Widow” is full of action and car chases, but they’re balanced by moments of humor, genuine emotion and accompanied by plot twists you won’t see coming.

Natasha and Yelena both have a lot to reckon with in their pasts as Black Widows. The film doesn’t shy away from Natasha’s history and the wrongs that she did as part of the Black Widow Program, much like “The Falcon and the Winter Soldier” addressed Bucky Barnes’s guilt over his past as the Winter Soldier. After a revelation about the Red Room, Natasha must reckon with how she walked away from her past previously and her determination to make up for the suffering she has caused.

While Johansson gives perhaps her best performance as Natasha, it’s Pugh who steals every scene she’s a part of. Yelena is another former Black Widow trying to find her place in the world while learning to make independent choices for the first time. Pugh balances the humorous moments of Yelena’s blunt little sister precociousness with her emotional scenes with Johansson and Harbour well. Johansson and Pugh have great chemistry as sisters, and a lot of the comedy comes from their bickering. The best fight scene in the whole movie, and most unique compared to other Marvel films, also belongs to the pair.

“Black Widow” is very much a movie about family and, in particular, sisters. The Natasha we’ve seen before in the MCU very much views the Avengers as her family, but at this specific point where the Avengers are divided over the Sokovia Accords, that’s in question. This makes Natasha having to confront her place in her original family even more daunting as she must, once again, overcome the idea that she cannot form relationships, giving us a more nuanced view of the character. As an older sister myself, I definitely identified with Nat’s protectiveness over Yelena — also her annoyance at her antics. They’re a duo that many pairs of sisters will likely recognize themselves in. Unfortunately, because everything is focused on the pair of sisters, Melina’s character development is somewhat lacking.

The film benefits from a tremendous dramatic score by Lorne Balfe and fantastic use of the song “American Pie” by Don McLean. While the cinematography is average, mainly for an MCU film, the gorgeous European scenery does add something to the visuals. I also admired that the Widows’ hair is often styled up, which is much more practical for combat, and Yelena has some lovely braided hairstyles. Luckily, the film focuses on Natasha and, other than setting up the character of Yelena, doesn’t work too hard or disrupt its narrative to set up anything for Phase 4 of the MCU. However, the mid-credits scene is definitely worth sticking around for — both because it is a very touching moment (I’d never cried in a credits scene before), but also because it sets up Yelena’s journey.

While “Black Widow” is certainly no “Thor: Ragnarok” or “Black Panther” and has fairly average MCU visuals and fight scenes, it is a great story that is elevated by its cast and score. The themes of family and women’s agency that it explores are a welcome addition to the MCU and hopefully a good indication of where Phase 4 is going. “Black Widow” doesn’t radically reimagine any films made before it, but it provides nuance to Natasha’s character that she’s never had before.