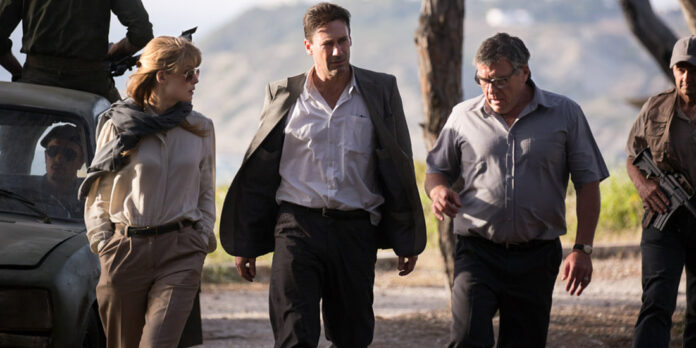 THE STORY – Mason Skiles (Jon Hamm), a top U.S. diplomat, left Lebanon in the 1970s after a tragic incident. Ten years later, the CIA calls him back to a war-torn Beirut with a mission only he can accomplish. Meanwhile, a CIA field agent who is working undercover at the American embassy is tasked with keeping Skiles alive and ensuring that the mission is a success. Without knowing who is on his side and with lives on the line, Skiles must outmaneuver everyone to expose the truth.

​​​​The adult thriller was a genre that we used to see a lot of. Now, it’s become a rarity, as most thrillers are marketed towards a wider demographic, looking to score as a big of a return on investment as humanly possible. “Beirut” is a throwback to the type of 80’s or 90’s political, espionage thriller we were accustomed to receiving on a weekly basis. It will not win any major awards or be hailed for doing something we have not seen before. However, what it sets out to do, it does it very well. With a charming and always compelling Jon Hamm commanding our attention throughout, a smart screenplay (Written by Tony Gilroy, which sat on the shelf for over 20 years) and a premise/setting that will remind of you of the 2012 Best Picture winner “Argo” (But without the laughs), “Beirut” is a captivating adult thriller that both entertains and engages you.

Mason Skiles (Jon Hamm) a former diplomat, is an expert negotiator who is haunted by a tragic past which has forced him to drink and move away from his previous home in Lebanon and back to the United States where he’s working an unfulfilling job. When a situation arises within the CIA, a field agent (Rosamund Pike) calls Mason in to facilitate the negotiations around a prisoner exchange which unbeknownst to Mason, he has emotional and personal ties to. Now back in Beirut, more unreliable than he once was and fighting against time to save an old friend he left behind, Mason’s past comes back to haunt him through this exchange in ways he did not expect.

Suspenseful and filled with many surprises around every corner, “Beirut” may not be the most impeccably crafted screenplay ever written but it also wisely avoids the trap of getting too deep into expeditionary dialogue. Instead, it focuses its story on the emotional connections which Mason has remaining in his life after a terrible tragedy changed his life years prior to the events in the film. This helps to keep the story emotionally grounded and relatable. Jon Hamm is up to the task of carrying the picture on his shoulders and he proves to be the best person to do it. There is never a moment where you doubt that he is the smartest guy in the room. His negotiation scenes are tense, intellectual and well delivered by Hamm who turns in his best film performance yet. While no one else in the cast (Which includes Rosamund Pike, Dean Norris, and Shea Whigham) has as much meat to their roles as Hamm does, there was never a moment where I felt like someone was out of place or getting tossed to the side either. “Beirut” is simply a well-oiled machine of a thriller where all of the parts fit perfectly to both delight and grab the viewer in its story of presenting a culture that has been torn apart by hatred and war, through the eyes of a likable and sympathetic character.

Much like how “Bridge Of Spies” was an adult political thriller based on a prisoner exchange, “Beirut” takes a similar approach to its storytelling, making it a cross between that film and “Argo.” It lacks the sentimentality of both and its stakes feel more dangerous as Mason races against time to complete the exchange and seeks to find closure for his own broken past. You can find plenty of reasons to criticize “Beirut.” However, with a haunting score, a commanding lead performance from Jon Hamm, a lively sense of pacing and a screenplay that could have easily put us to sleep but thankfully does not, “Beirut” should instead be celebrated as an adult thriller that hits all the right notes and makes the impact it wants.