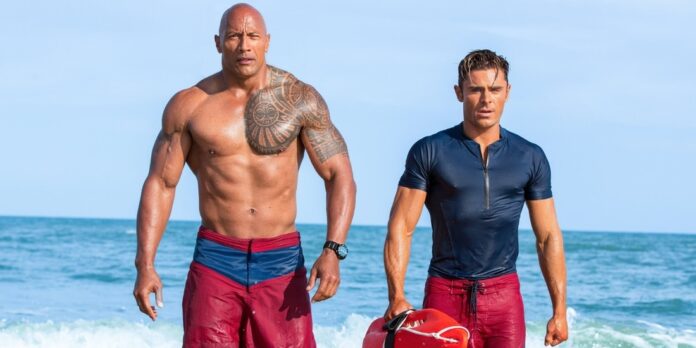 THE STORY – Lifeguard Mitch Buchannon (Dwayne Johnson) and a brash new recruit (Zac Efron) uncover a criminal plot that threatens the future of the bay.

​Heading into the 2017 movie version of “Baywatch,” I was kind of hoping for something light, breezy, entertaining and laugh out loud funny. It did not always need to be politically correct. It did not need to be anything Oscar worthy. Simply make me laugh and everything would have been fine. Instead, “Baywatch,” much like its co-star Zac Efron, continued to piss me off more and more with each passing moment. At almost two hours, “Baywatch” at a certain point, stops being funny and simply turns into one of the more embarrassing films of the year. Not even the always reliable charisma of Dwayne “The Rock” Johnson could save this sinking disaster.

Mitch Buchannon (Dwayne Johnson), is the leader (He prefers to be called Lieutenant) of the elite Baywatch lifeguard team. The team takes its job of saving lives and keeping the beach safe very seriously. One day, a new recruit named Matt Brody (Zac Efron) is forced to serve on the Baywatch team as a part of his probation. With two gold medals for swimming to his name, he is seen as the golden boy for the team who will help bring great publicity to the Baywatch organization. His brash behavior and arrogance clash with Buchannon’s leadership, but when a dead body is found on their turf, they must put aside their differences and work together to stop a criminal leader (Priyanka Chopra).

“Baywatch” starts off promising enough. An updated, raunchy version of the 90’s television show which everyone loved? Sure, why not? Add two of the hottest (Literally and figuratively) men in Hollywood as the leads, along with a few unknown supporting players and “Baywatch” had the opportunity to surprise and entertain with its humor, absurdity, and likability. However, outside of Dwayne Johnson (Who is nearly impossible not to like), no one in this movie is likable as a character. If the film expects us to care for them, it’s because they’re young and good looking and they should receive a pass from us because…well, cmon! Just look at those eyes! Those abs! Those boobs! This movie objectifies its characters (And yes, I understand that’s the whole point of “Baywatch”) but commits the fatal sin of not giving them characteristics which we can root for. One character, Stephanie Holden (Ilfenesh Hadera), is given characteristics which make her a natural leader of the team alongside Buchannon but all of that is thrown away in a poorly written scene where the character of Captain Thorpe completely strips her of all credibility. It’s all done in poor taste and could have been executed in such a way as to not hurt the characters.

Zac Efron is his normal douchey-self. Alexandra Daddario is typically cast aside in favor of the men and is forced to either make her dialogue sound anything less than terrible or make confused reactionary faces at her male co-stars. Priyanka Chopra spews lines of dialogue like a Bond villain would and yes, there is even a line which references this. The only one in the cast that does not make a complete fool of themselves and land horribly on their face doing so is Johnson and newcomer Jon Bass as Ronnie. Bass gets all of the film’s biggest laughs (What little there are) even though he is a total, complete creep towards the 2017 version of CJ, played by Kelly Rohrbach. In case you couldn’t guess it, CJ’s only role in this film is to run in slow motion and be objectified by all of the Ronnies of the world. And we’re supposed to be ok with this?

I have not even mentioned the cheesy and amateurish visual effects which plague a vast majority of this film, nor have I brought up the poorly shot action scenes which go in far too close with the handheld cameras. “Baywatch” has so much potential and many opportunities to redeem itself throughout but director Seth Gordon (Whose previous credits include the lackluster comedies “Horrible Bosses” & “Four Christmases”) squanders every chance he is given. It’s not the worst film I have seen this year. I did get a few minor chuckles (All of the big laughs you have already seen in the trailers), found Jon Bass to be amusing at times and any movie which has Dwayne Johnson attached is going to entertain me…somewhat. However, “Baywatch” is borderline and at this point, it would probably be best if I just let it drown.