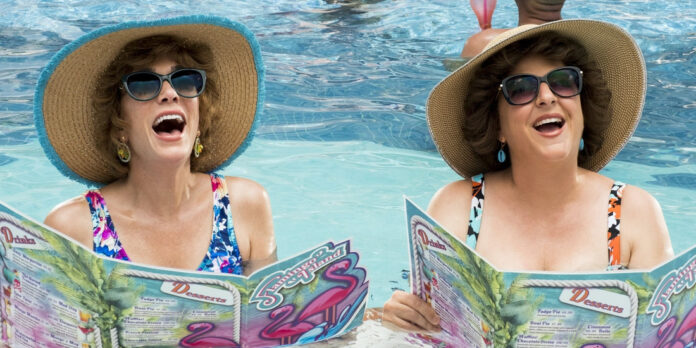 THE STORY – Lifelong friends Barb and Star embark on the adventure of a lifetime when they decide to leave their small Midwestern town for the first time ever.

​​Making something purposefully campy can go wrong in so many ways. Part of what makes something camp, after all, is the fact that it does not know that it’s camp. Done poorly, this can lead to something that exhausts itself in an attempt to force the audience to have a good time (“Mamma Mia!”). Done well, it can lead to something so delusional that you find yourself having a good time in spite of yourself (“Mamma Mia! Here We Go Again“). Falling smack dab in the latter territory, we have “Barb & Star Go To Vista Del Mar,” the new film from Kristen Wiig and Annie Mumolo, the writing team behind the Oscar-nominated “Bridesmaids.” This brightly colored ode to Florida has campiness embedded in its DNA, and against all odds, it actually ends up working.

Surely some of the credit for this must go to director Josh Greenbaum (“Becoming Bond”), making his narrative feature debut with a surprisingly steady hand. But while his light touch shouldn’t be underrated, much of the reason for the film’s success is Mumolo and Wiig themselves. The pair’s decades-long friendship is clearly felt in every frame, and it’s clear that the tone of the film comes straight from their personalities. More than anything else in the film, it’s their comic sensibility and easy rapport with each other that pulls the audience in and makes them stay on this banana boat ride through every wacky dialogue tangent and plot development.

Ah, yes. The plot. “Barb & Star” is, at heart, one of those oft-told tales of two long-time best friends who haven’t left their cozy little town (Soft Rock, Nebraska, in this instance) in far too long and finally decide to take a vacation (the Vista del Mar of the title), where they find love and personal growth. But the actual plot details are so crazy that saying any more would spoil most of the film’s fun. When a film feels so much like an acid trip that whether or not it would actually make more sense while on acid is an open question, that film has truly entered rarefied air, and “Barb & Star” is exactly that kind of film. Moving from plot point to plot point like a fever dream, “Barb & Star” has a sense of randomness that often makes it feel like the whole thing was improvised on set. While that may be true for the dialogue, it isn’t true for everything else since, at the very least, locations had to be scouted and sets had to be built in advance for every scene. But the film contains so much WTF-ery that it’s hard to imagine anyone coming up with it all by themselves, let alone a Hollywood studio sinking so much money into it.

But they did! “Barb & Star” will do just about anything for a laugh, no matter how weird or far-fetched or just plain dumb. This shouldn’t work, but Mumolo and Wiig have such a tight grip on the tone they want the film to have that it does work, even if the film gets just as much laughter from doing the unexpected (or, frankly, unimaginable) as it does from doing things that are actually funny. In fact, it’s that very unexpected nature that makes the film work even when the humor fails; comedy may be subjective, but WTF-ery is universal.

The cast members – Mumolo, Wiig, a murderer’s row of comic ringers, and a very easy on the eyes Jamie Dornan – are all on the same page comedically, which goes a long way in helping the film work its magic. More than that, though, they all seem to be having a genuinely good time – so much so that it transfers to the audience. In the tradition of all the best camp classics, “Barb & Star” radiates a certain kind of warm, generous, go-for-broke spirit that comes from a prominent place of love – love for these characters, love for Florida (the touristy beach resort part, not the swamp-and-strip-mall part), and passion for friendships of all shapes and sizes, all wrapped up in a love of kitsch.

This is where the film truly earns its camp claim: Kitschiness abounds in nearly every frame of “Barb & Star.” It is presented with a complete lack of irony. Barb and Star are the kinds of women who find genuine joy in kitschy things, and Mumolo and Wiig are so lovable in the way they play them (overdone hair and accents and culottes and all) that we come to feel the same way. It’s that purity of intention that keeps “Barb & Star Go to Vista Del Mar” from going too far and ruining the good vibes. Of course, “too far” is a relative term, and this film certainly won’t be for everyone, but if you appreciate the campier things in life, this is like manna from heaven. And if you don’t, well, it will still give you enough moments of WTF-ery to be worth the price of admission, even if the sight of dozens of people partying in a pool without masks on makes you squirm.