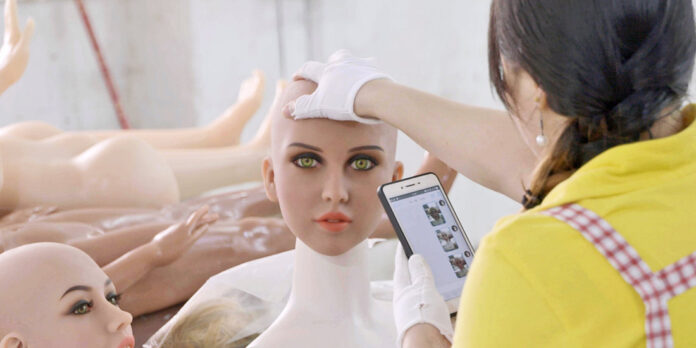 THE STORY – A portrait of life in modern China that prioritizes productivity and innovation above all.​

​Films are often vehicles to create an impactful expression that comments on relevant topics in the modern age. The potential is potent for the opportunity to craft an analysis that looks at current events and bring an examination to them that is deeply appreciated. All mediums are capable of such an endeavor, but documentaries are particularly equipped for this messaging given their real-world implications. The new film “Ascension” very much takes place in this state, choosing to focus on a specific part of the world dealing with its growing influence in a globalized society. The results are an intriguing display of captivating evaluations.

The film’s focus looks at the pursuit of wealth and prosperity in China, particularly when growing globalization and encroaching capitalism have made the country a hot spot for economic expansion. For what little there is, the story traces through the different levels of social and labor strife. One follows the working class slaving over the production of cheap products, to middle-class entrepreneurs attempting to better themselves, to the super-rich who reign as the country’s elitist group. Each designation provides a stark perspective on how these citizens view themselves in the race toward prosperity and the status they hope to gain in an evolving landscape with its own unique attitudes.

The viewpoint that director Jessica Kingdon can craft sets a fascinating peek into an environment that may seem foreign to some yet has some elements that feel hauntingly resonant. The depiction of the labor force is one of the harsh realities, especially as one tours factories that assemble everything from disposable makeup products to expensive sex dolls. The push for more workers to perform under challenging workplaces for low pay matches conditions seen in the western world. That intimate observation is filled with commentary on the continuing effects of industrialization. It makes an interesting contrast to the middle-class community that finds themselves aspiring to a higher level of wealth that is mainly gained through good business etiquette and subservient behavior to the elites. By the time such elites are shown, the portrait of their control over the economic system that extends only to their own selfish interests is poignantly felt.

While the film is rich with thematic weight, its construction does not follow any sort of traditional narrative, even for a documentary. It puts this world under a microscope and remains quite observational, only offering glimpses into the personal lives of a few participants. Because of that, the piece remains emotionally distant and somewhat repetitive, though the latter is an element that feels engineered by design. This does recall the works of Godfrey Reggio and Ron Fricke, but this effort is not quite as compelling. The smaller scope and reserved emotions make the execution feel more clinical and prevents one from becoming fully enraptured. The analysis is rich but more respected on an intellectual level instead of one that is genuinely moving, particularly as there isn’t a natural flow to the pacing here.

Still, such analysis is a welcomed one as the film does try to use the systems of economic disparity in one specific country as an example of how many societies function. The fact that it uses China, a country caught between its Eastern traditions and Western ideologies, as a microcosm of this phenomenon offers an illuminating mindset on the price of a global marketplace competing for dominance. While this story may seem specific to one country, it speaks to many nations’ broader responsibility to earn a spot in a competitive arena. The casualties of such determination are those on the lowest levels trying simply to survive.

There is an alluring exploration at the heart of “Ascension” that makes it a worthy work to seek out. While its lack of interest in following specific individuals keeps it somewhat distant in terms of a more emotional impact, the layers it peels back in dissecting the quest for affluence is incredibly engrossing. This film showcases another grand utilization of documentaries, presenting a picture of the world that gleams a deeper truth while doing so with slightly unconventional means. It doesn’t always have the necessary force to be effective, but the conclusions are still a provocative testament to an exceptional type of storytelling.