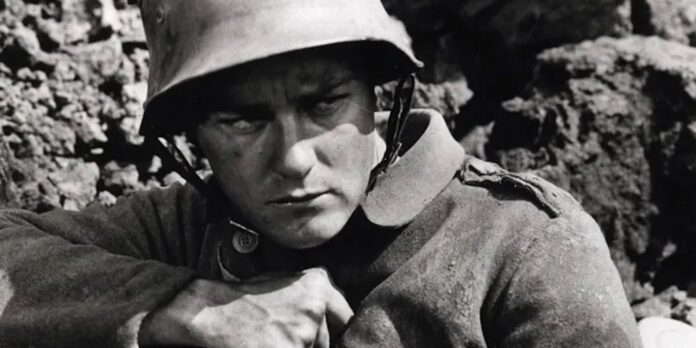 THE STORY – The film follows a group of German schoolboys, talked into enlisting at the beginning of World War I by their jingoistic teacher. The story is told entirely through the experiences of the young German recruits and highlights the tragedy of war through the eyes of individuals.

“Dulce et decorum est pro patria mori,” recites the professor, an old, educated man who will never see the battlefield, “It is sweet and fitting to die for one’s country.” A phrase initially written by the Roman poet Horace, it was famously used by English poet Wilfred Owen in his grisly lamentation about the horrors of war. Owen himself died in action at twenty-five, a week before the Great War’s end.

Behind the old man, lines from Homer’s “Odyssey” are written on the chalkboard in greek: “Tell me, oh Muse, of that ingenious hero who traveled far and wide.” This man, and the boys he teaches, know of war from what they’ve read in textbooks, from thousands of years ago when men who completed divine labors were worshipped as “heroes.” This was enough to encourage this enthusiastic young generation of Germans to enlist in the army in 1914.

The novel “Im Westen nichts Neues” (which literally translates to: “In the West Nothing New”) was met with opposition by those who deemed it pacifist propaganda and critical of the German war effort. Chief among these critics was the emerging Nazi party, which held public burnings of the book once it came to power in 1933. Universal Studios English-language adaptation of the novel was also protested worldwide, which led to national bans in various countries until decades after its release. In America, however, admiration for the film was enough to make it the third winner of the Academy Award for Best Picture and earn Best Director for filmmaker Lewis Milestone. As Nazis stormed movie theatres that dared project the film with cries of “Judenfilm!”, two European-born Jewish men won Oscars for one of the most important and influential anti-war films of all time.

This was only a few years after the advent of sound synchronization technology in 1927, and though studios were quick to jump on the trend, many sound films from around this time period display an obvious ineptitude with the technology. Fortunately, this film has neither awkward silence nor an excessive soundtrack. Instead, silence is used strategically to put audiences on edge without directing their emotions through over-emotional music cues, and precise, chilling sound design places the audience right in the throes of the battlefield. The film also deserves high praise for its dynamic camera work, editing, production design, and other technical aspects that contribute to its authenticity and relatability almost one hundred years later. Reportedly, Milestone was determined for the film to appear as realistic as possible, with battlefield trenches so “lived-in” a health inspector was called to assess the situation, himself a veteran he brought in Los Angeles-based German veterans to evaluate the authenticity of the sets, costumes, and military procedures as seen in the film.

The film was made during a particular time in Hollywood history known as the “Pre-Code era,” so named because it was prior to the enforcement of the “Hays Code,” which required Hollywood studios to self-submit to a set of rules and regulations that forbid any portrayal of “immorality” (e.g., profanity, nudity, sexual deviance, excessive drinking, unpunished criminality, etc.). Before its enforcement, Hollywood had the ability to push the envelope with what it put on screen. That is perhaps why the film feels so grounded and modern in its portrayal of violence and sexuality; it was allowed to show the gruesome truth of war and all its dirty laundry. There is no confusion to a 2022 audience member as to just what the three soldiers intend to do when they swim across a river, naked, to meet up with three friendly French ladies. This encounter, which would be considered scandalous only five years later, presents one of the film’s most intimate moments. As the camera holds on a plain concrete wall with dancing shadows, the young man and woman talk in their respective languages, somehow managing to understand one another and taking solace in each other’s company.

It would have been strange for audiences in 1930, so soon after the war’s end, to watch a film from the perspective of their enemy. That, of course, is crucial to the film’s essence, said critic Pauline Keal: “War always seems like a tragic waste when told from the point of view of the losers.” It is at once both introspective and universal, allowing American audiences to reflect on their own relationship with war while recognizing it as a global issue that affects the populace of every nation. Today, it is hard to imagine an American studio making a film from the perspective of the “enemy” so soon after the culmination of events with as much composure and empathy.

Aside from the film’s rich technical elements, its cast of young men manages to capture the simultaneous joy of youthful boyhood and the loss of innocence brought about by their tragic experiences. Led by the charming Lew Ayres, the cast is supported by a compelling list of character actors who cement the film firmly in reality. Most notable is Louis Wolheim as Stanislaus “Kat” Katczinsky, who never skirts around the truth of warfare while offering a helping hand to the young men under his watch. Considering that screen acting with spoken dialogue was a new art at this time, the cast skillfully falls in line with the film’s overall atmosphere of truthfulness and honesty.

Following in the footsteps of William A. Wellman’s “Wings,” a WWI silent film that was the first Best Picture winner three years prior, “All Quiet on the Western Front” is the second of almost twenty “war movies” to win Best Picture. It is undoubtedly one of the best in both this genre and the category as a whole, and set the foundation for a hundred years-worth of war films to follow, such as “The Best Years of Our Lives,” “Paths of Glory,” “The Deer Hunter,” “Platoon,” and “1917“. If only, as the film would hope, someone had listened.