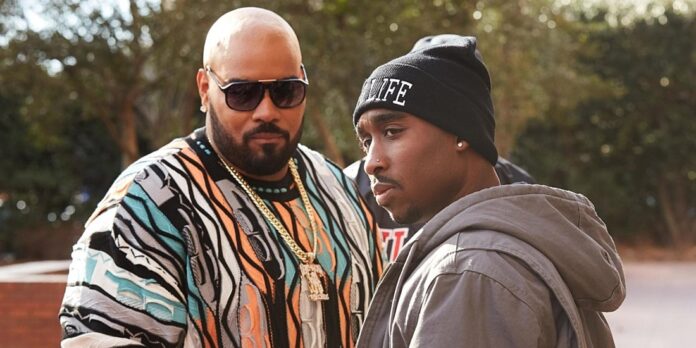 THE STORY – The true and untold story of prolific rapper, actor, poet and activist Tupac Shakur (Demetrius Shipp Jr.), from his early days in New York to his status as one of the world’s most recognized and influential voices. Against all odds, Shakur’s raw talent, powerful lyrics and revolutionary mindset establish him as a cultural icon whose legacy continues to grow long after his death.

​“All Eyez On Me” is exactly the kind of film that “Walk Hard: The Dewey Cox Story” warned us about it. Tupac Shakur is such a fascinating figure not just within the rap/hip-hop world but also within pop-culture. It’s a shame that the first true biopic detailing his meteoric rise and tragic murder is such a disappointment. Comparisons to a much better musical biopic film taking place during the same time period, “Straight Outta Compton,” is inevitable. Where that film patiently took its time to deliver a meaningful story with exceptional execution, “All Eyez On Me” delivers a muddled story with poor filmmaking to create an arduous nearly two and a half hour film that is unworthy of the man known as Tupac.

“All Eyez On Me” tells the true story of the rapper, actor, poet and leader Tupac Shakur (Demetrius Shipp Jr.). The film takes a “greatest hits” approach to show his youth in New York, to his rise in California as one of the world’s most popular and successful rap artists. With an unconventional message of truth through harsh lyrics, Tupac’s message is one of love and loyalty to his people. However, such an opinionated attitude and inability to move away from his violent and confrontational tendencies will inevitably lead to his untimely death at the age of 25. His message carries on well after his death through his music leading him to still be considered one of the greatest musical artists of all time.

The biggest problem With “All Eyez On Me” is the filmmaking by director Benny Boom. The film is littered with so many poor editing transitions, characters who weave in and out of the story with little to no explanation and unintentional line deliveries of dialogue that is expected to come off as tough and dramatic but does not ring truthful at all. At two hours and twenty minutes long, “All Eyez On Me” is poorly paced and lacks forward momentum and energy to create a meaningful experience. Instead of coming off as a young leader for a nation who needed someone to look up to who they could call their own, he instead is too busy landing himself in jail for what he calls “loyalty” or for being a victim of a system out to bring him down. Society viewed Tupac as an idol, and they still do but his flaws shine through here in a way where they, unfortunately, overpower his more humane and better qualities.

Tupac’s music was changing the world. His voice was true and his message was loud and clear. Demetrius Shipp Jr.’s performance is also loud and clear. It’s an impassioned one where Demetrius Shipp Jr. truly gives it his all that under a better director could have been one of the more highly regarded performances of the year. Instead, it will become forgotten about by the year’s end despite the passion and layers of emotion Demetrius Shipp Jr. brings to the role. His mother, played by Danai Gurira, may feel cliched at first due to the on-the-nose writing but Gurira also brings a lot of complexity and emotion to her role as the single mother who had to endure so much in an effort to give her children better lives.

“All Eyez On Me” is the very definition of a tired and true musical biopic. It’s long, it’s misguided and it’s unfocused. Tupac is a fascinating character with much to give to the cinematic experience, however with such an amateurish film, “All Eyez On Me” cannot hold a candle to the much better “Straight Outta Compton.” Despite some passionate performances and a celebration of the music and values of the man known as Tupac Shakur, the film even manages to mishandle those values and the overall theme of the film, leading to one of the year’s biggest disappointments.