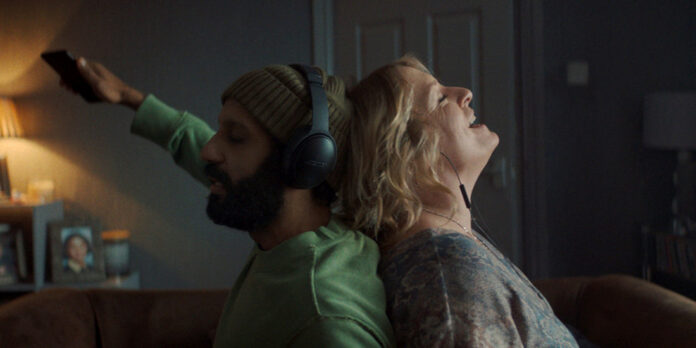 THE STORY – Two lonely people develop a deep connection despite the lingering legacy of their past relationships.

​​While the vast array of small-scale American dramas can be quite an engaging experience to witness, there is a special quality to behold when viewing the British counterpart. It’s not dissimilar in the ability to lend an eye toward a particular perspective that is often rooted in working-class backgrounds. Yet, it’s almost as if the aura of the latter’s setting offers a certain heft as if the cultural history that stretches far beyond that of the United States emboldens these tales with a weightier presence. The social statuses contain a more layered observation, which in turn lends these stories an even more intriguing voice. One can certainly feel such intent with “Ali & Ava,” an endearing character study that is propelled by a pair of moving performances at the center.

The film revolves around two individuals struggling to maintain control of their chaotic emotional states in their modest neighborhoods. Ali (Adeel Akhtar) is the local landlord who boasts a jubilant and outgoing personality in an effort to mask the inner pain he’s going through due to his marriage dissolving. Ava (Claire Rushbrook) is a teaching assistant who also attempts to bring as much optimism into the world while she desperately tries to maintain her familial unit following the death of her abusive husband. A chance encounter brings these two together, and both can immediately recognize the melancholy that consumes them. They also see the joy each of them brings, and a fast friendship soon blossoms into something deeper. Their surrounding support circles look upon them with confusion and contempt, yet both understand the light that eliminates the darkness within them is worthy of perusing.

Both Akhtar and Rushbrook are the glue that holds this entire piece together, and they exchange a warm and inviting chemistry that makes an audience easily root for their sustained connection. Akhtar has the more boisterous persona, which he deftly employs to charm while also highlighting the internalized trauma that slowly eats away at his soul. Rushbrook often carries herself in quieter moments that express a captivating tone while also highlighting the lingering anguish that is prone to sabotage. Separately, each gives a tender portrayal that fully realizes the layers of the characters, and together they make a compelling couple. Even when the story’s natural progression isn’t entirely earned, these actors do a commendable job at crafting effective performances.

Writer-director Cilio Barnard creates an intimate portrait that immediately assembles an engrossing perspective. The style brought to the material has an alluring naturalism with a splash of artistry to give texture to this lived-in world. The filmmaking is muted but intentionally limits flamboyance to hone in on the evolving emotions at play. The directorial efforts serve this objective well, and one feels compelled to invest in these plights. Barnard’s screenplay doesn’t fare quite as well, often the victim of blunt cathartic revelations and some pedestrian tropes. The storytelling is inconsistent in finding the proper nuance with its players, which is particularly felt in a second half that lacks the breathing room to make these journeys feel appropriately earned. The script’s foundation serves more as a basis for capturing profound human moments rather than a wholly inventive narrative.

There’s no doubt that what contributes most to the success of “Ali & Ava” are the two central turns that breathe so much authenticity into this piece. Akhtar and Rushbrook are divine in their roles, each inhabiting a person consumed by their isolation and discovering pure joy in coming together. It’s what gives both such elation when their projected exteriors soften and evolve, and the performances beautifully match this progression. It’s a wonderful action to watch unfold, and Barnard’s eye manages to seize these moments with an appreciated tenderness. It’s quite the achievement despite the story not having the best construction to establish a natural rhythm to immerse oneself within. Regardless, this is yet another fine addition to the pantheon of fine British dramas, and the tale it looks to tell has an arresting quality that can be quite absorbing.